Some people are too helpful, or keep your mitts off my plate!

Today is Thanksgiving. The big guy and I have achy knees, and a heart filled with love, because we have so much for which to be thankful. In a  few hours everyone will arrive, and our small house will be noisy. Everyone will fuss over the babies, and I will special-snuggle each of our grand kids, even those who tower over me.

The food is ample. the bird is plump, and  the young ones will inevitably be coaxed to eat something off their plates. "Just one more bite. A vegetable or no dessert."

In years past  I have insisted, pleaded, begged, my kids. Then when the grands came along, I sneakily devoured their food so their parents thought THEY ate it.

I have been known to add a bit extra off my plate to Bill's when I can't eat it all.

I don't mind if my honey puts something on my plate to taste, but by golly don't ladle food onto my plate if you don't know me!

Tuesday I was in a buffet line waiting for Asian chicken. A short guy with a thin white ponytail and a big mouth waited stood in front of me. The pan was empty. He asked, "You like this chicken, too?"

That was the extent of our conversation.

There was one crusty chicken chunk left in the pan, so I scooped it out and put it on my plate. When the chef put a new pan of chicken on the buffet, this guy loaded up a ladle and dumped it...
on my plate!

He looked offended. "I thought you said you liked it."

"I do, but I don't want fifteen chunks. I only wanted three," I said as I scooped the chicken (including that one crunchy piece I really wanted) onto HIS plate. He looked shocked.

Guess he didn't look at MY face.

If you are reading this, know I am thankful for YOU.
Posted by Linda O'Connell at 9:41 AM 4 comments:

The sun trying to break through the clouds spotlighted an emergency and the intensity and urgency of an air lift at sea on board our cruise ship. This photo evokes feelings of hopefulness as well as hopelessness.

Early in the morning there was an emergency call for a critically ill passenger. Rumors abounded, but the consensus was an elderly man had a massive heart attack about 6:30 a.m. A doctor, three doors down heard the man's wife screaming for help and assisted. 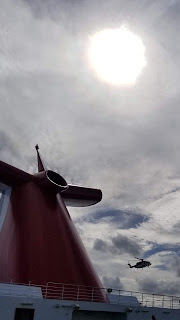 As you can tell by the angle of the sun, it was about 1:30 p.m. when the helicopter finally arrived. Out of respect for the family, the captain asked no videos be taken. But there was a crowd of onlookers (including us) who did capture cell phone images. We were one deck below, close enough to witness the difficulties and frustration of trying to land in gale force winds. A half hour we listened to witness's comments, "That aircraft is fuel sensitive, they won't have enough to make it to shore." "Watch out if it crashes; shrapnel will fly."

I stood shoulder to shoulder with passengers in solemn silence. I watched and prayed as the chopper bounced on air currents, swayed left and right. Unable to hover, the pilot had to circle the ship time and again.

I prayed, "Lord, you command the winds and seas, please help this rescue mission, and if it's thy will be done, allow this person to survive."

After many attempts, the ship's captain cut the engines and steered the ship as close as possible under the hovering chopper. Medical personnel dangled from a cable and made their way on board. Minutes ticked endlessly, and then a stretcher was lowered. Finally, the patient and medical team were airlifted. Out of respect, I did not photograph that part.

As the chopper zoomed off, a collective sigh, cheers, and rousing applause rang out. The doctor leaned out of the chopper and gave a thumbs up. 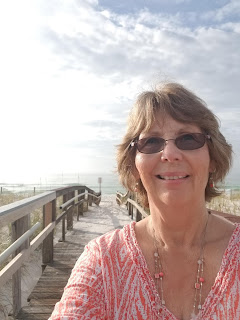 Even though I look elated to be on the beach, days later I was still concerned for the patient and family. The images and incident haunted me. I can only imagine how those with PTSD suffer from flashbacks.

My honey looks pensive as our cruise comes to a close. We enjoy gazing into the ruffled tail spray at the back of the ship. 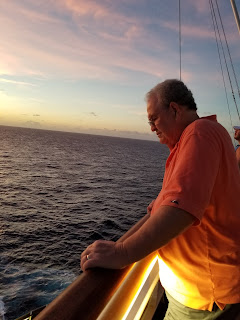 Sun rises on the horizon streaming brilliant streaks of sunshine on the Caribbean turquoise blue (which you cannot see here)...  and the promise of a new day.


Make the most of yours! Nobody is promised tomorrow. 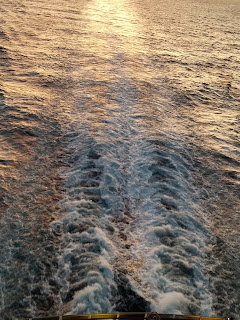 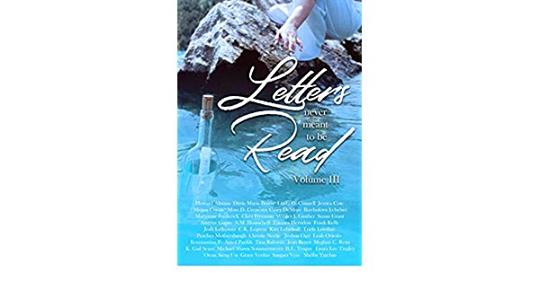 Letters Never Meant to be Read Vol. III  (Marc D. Crepeaux, Rusty Wheels Media) is now LIVE on Amazon. My letter is included in this fantastic anthology. I started reading, and I could not put the book down.

Consider contributing a letter of your own. The stories are diverse and include: Dear Me, To whom it may concern:, Dear Cookie Dough, Dear Jerk, Dear Counselor and so many more. These letters are relatable.

Here is the shortened link of the kindle version for your viewing pleasure:
https://amzn.to/2PPJYuC

And here is a shortened link to the paperback version:
https://amzn.to/2T5Uqgu

Also, there are updated covers and interior for a 2nd edition re-release of Letters Never Meant to be Read Volumes I & II which can be found here:

If you're interested in getting a copy of one of these volumes, it supports other authors. And perhaps it will inspire you to pen a letter never meant to be read.

Letters Never Project is always accepting submissions year round and can be submitted to:

A Letters Volume IV contest is coming your way!

This time, the 1st, 2nd, and 3rd place contest winners will receive a copy of the final publication signed by Marc D. Crepeaux, as well as a signed copy of Vol. III. This is in addition to cash prizes.

Do you love being in the loop on the latest and greatest reads?

This video highlights just what Rusty Wheels Media is doing. We offer (in most cases) zero upfront costs to our authors. So you get published for FREE.

In the Mist of Fire by Nathalie Grabinski :
https://amzn.to/2FhXX8s

SPARK... an idea that could lead to future publication

An image can spark an idea, a story, or a poem. Sometimes when I try to write I hit a dead end. When I merely write what I observe along the way, I sometimes spark a poem, essay or story.

Tropical sunrise tripped my trigger and made my heart ping. 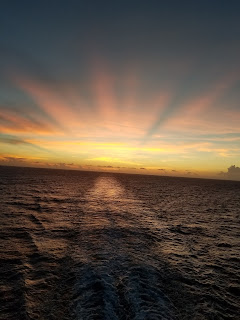 Florida sunset made me swoon but was gone too soon. Rained the next three days. 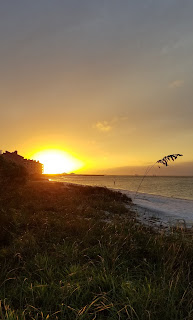 We went on an enjoyable cruise with Bob and Peggy, a couple we have traveled with before. I enjoyed the Caribbean blast furnace heat. I would rather be hot than cold. But winter does not listen to me. Two inches of snow possibly today. I am trading one white (sand) for another (snow.) 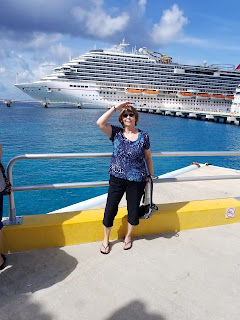 I left behind my footprints, saw a few ocean critters, and took home memories to get me through winter. My honey has been in therapy for a sore leg so he sat, and I waddled a few worries away. 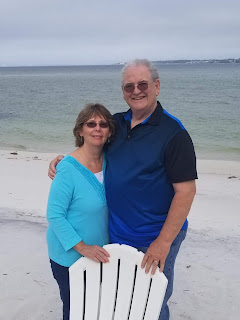 On the long drive home from New Orleans, I wrote random thoughts about things I observed along the way.

Weathered row boat, wintering bottom up on a stump, in a cluster of barren trees, oars clinging to wooden ribs.

Spring growth will hide that little boat like a squealer in the witness protection program.

Empty dandelion colored bucket gaping on its side. Wire handle anxious for an encounter.

My new scarf worn on Halloween night, transforming me into a butterfly. (my blog photo)

Your turn! Look around, out a window, or at the sky. Write a creative sentence or two about what you see. Will you share?