Today at preschool my four and five year old classes had their Halloween parties. Those little cuties had so much fun. They've been practicing songs and poems and fingerplays for the big event. Their parents stayed and watched them parade in costumes and recite. One of their favorite poems (with actions, of course) is The Dingle Dangle Scarecrow: I'm a dingle dangle scarecrow with a flippety floppety hat. My arms can move like this and my legs can move like that. I wish I could attribute it to a particular author, but after 34 years, I can not remember who wrote that little ditty. Were they ever surprised when I opened the door and the Dingle Dangle Scarecrow greeted them. (That's a fat little crow in bib overalls on my hat.) 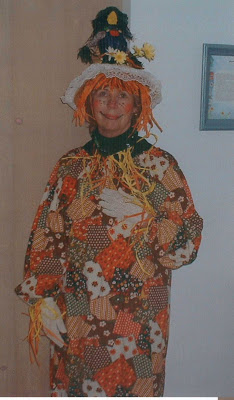 Hubby and I went to a costume party as Mr. and Mrs. Scarecrow, and we won a prize! We did look pretty cute hanging out in the field together. 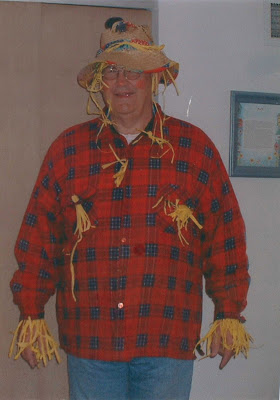 You are so cute! You have a fun age to work with, eps. on holidays. While I loved Halloween once and I love autumn now, I am not crazy about this holiday any more. Since Halloween is on Sunday this year, are you expecting your kiddos to be on a sugar high for MOnday. :)

Just found your email in trash folder again! Will get back to you on that later.Shot for today I think!

Oh, your hubby's picture just showed on my screen...wonder where it was? He is cute and this scarecrow looks squeeable!

You guys are so cute - that looks like so much fun - the kids will love that.

How cute you and your husband look as scarecrows! Holy cow!

Hi all,
This is as much of a costume as I could get him to wear. Originally I wanted him to wear a striped night gown and go as Wee Willy Winky with a lantern. He nixed that idea real quick.