Oops he did it again!

I have so much to tell you, but will start with my oldest grandson's accomplishment. Austin graduated high school on Thursday evening. He came into this world almost two months too soon and spent time in the hospital's NICU. We worried about him then and especially during those
angst-filled teen years. He's come a long way. He's bright, talented, and a body builder with great biceps. But I embarrass him when I say that. I have such happy memories of him when he was three years old singing Oops I Did it Again. Well he's really done it this time! 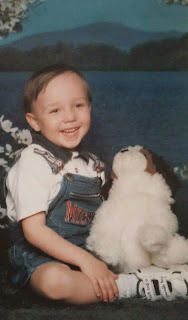 Over the years Austin has made me very proud. He was offered full time employment at his after school job at a home supply center, with benefits after 90 days. He plans to go to college in the fall. His lofty long-term goal is to become a counselor. He can and will do anything he sets his mind to. That's my guy!
I wouldn't sit in the bleachers on a football field for three hours for just anyone. The day was warm and sunny when we arrived, but by 10:00 p.m. it was cold and breezy and I'd had enough of the surrounding entertainment. Not just the band and choir presentations with poor sound systems, but the two rambunctious kids behind me bumping me all night as they climbed in and out numerous times. The overly-friendly 80 year old guy directly in front of us from Jersey City, New Jersey turned around and in his "Joisy" accent asked if we wanted to hear a joke. Never smile when someone asks you that. He was on a stand up comedian roll all evening. His jokes, like those bleachers, left a lot to be desired. 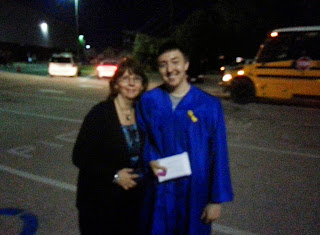 I pray everyday that Austin will have a happy, healthy and successful life, and I ask his guardian angel to fly as fast as he drives, and to stay with him in all situations, to smack him upside his noggin if need be. CHOICES...that's what life is all about.

The world is yours, Austin. Now go forth and make wise choices and a good name for yourself!

Next time I'll tell you about my surprise party. I was STUNNED, not surprised, by what happened  at my preschool end-of-year Spring Sing. Thank you, my friends, for sticking by me and reading my blog.
Posted by Linda O'Connell at 6:51 AM

Linda--Please extend my congratulations to Austin. He would make any grandma proud.

And whatever stunned you, I'm sure you deserved it... and I can't wait to read what was done for you (as a send-off?).

Always good to hear a success story! Know this must be a great few days for you...and your grandson.

Congrats to Austin! What an exciting time for him.

Best wishes to Austin on this momentous milestone. He looks like a real go-getter!

As for your bleacher experience, two words...weirdo magnet.

Austin sounds like a well-grounded, well-rounded young man and I'm sure he's as proud of you as you are of him.

How I love your way with words! Cannot believe he's a graduate!
Looking forward to your story about your surprise send off.

Sounds to me like those choices of his are awesome. Congratulations and all the best to Austin!

He's a handsome young man with much to be proud of. :)