You all know about "Wal-Mart People." Everyone has a story or two about a sight to behold inside a Wal-Mart store. Today we saw a sight outside, and we had to stop and say hello to Christine from Houston, Texas. 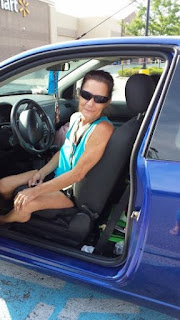 She has been widowed seven years, but prior to her husband's death, they travelled in a huge Winnebago. She said after he passed, she decided to sell the camper. When she opened the bathroom door, she couldn't eat for two days after cleaning the mess. So she bought this little treat for herself. She gets much better mileage than the 7 miles to the gallon they used to get in the Winnebago.


Her little myPod can be towed by a car because it is a lightweight camper built on a motorcycle frame. She has arthritis, so she likes to travel to warmer states. She is visiting someone locally, but has spent the summer in Akron, Ohio and travelled down the Eastern Seaboard. She sleeps where she wants, usually at Wal-Mart or other stores, or at friends' and relatives' homes. She loves meeting people. 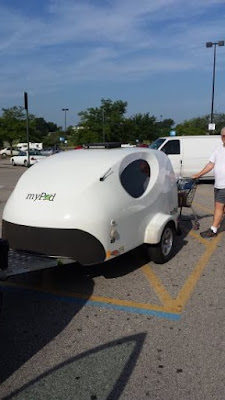 Of course my honey had to peek inside. He discovered a bed, an air conditioner, computer, television. All operate on a rechargeable battery. I guess she was making a bathroom stop, because that's about the only thing that little self-contained camper didn't have.

Now, I ask you, if someone gave you one of these, would YOU take off in it to see America?
Posted by Linda O'Connell at 6:02 PM

My brain is singing, "Born to be wiiiiild..."

Naw, the most important thing to us these days IS the bathroom!!!

I'm too much of a homebody for that kind of a lifestyle, but it might be fun to take a vacation now and again that way. I live in Akron, Ohio. I wonder if I ever crossed paths with your friend. :)

Yeah, I would need a chamber pot or a coffee can. But what a neat way to travel.