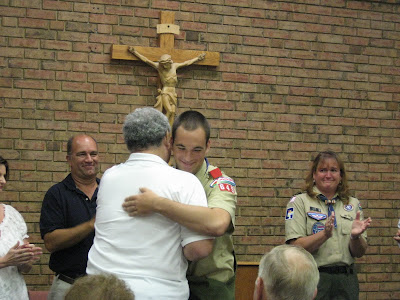 Bill's oldest grandchild, seventeen year old Kyle, achieved the rank of Eagle Scout today. He is a hard worker, has accomplished a lot in his life. He really enjoys physical work, building, constructing and tearing down, which is a carry over from when he was a little boy. He would duct tape things together: his tractor would be taped to his chair which was taped to another toy or table. He was always a busy builder who swore one day he would drive a long-long-long-long truck. He now drives an extended cab pick up truck and works construction when he's not coaching girl's volley ball or attending high school.
The presentation had some funny moments. Mr. Madden told about the evening Kyle was on his very first campout. When he went to the outhouse he accidentally dropped his flashlight down in the hole. The adults saw him running back down the road with his flash light flickering; they assumed he had fallen. He was covered in mud, or so they thought, until he got closer and they could smell him. He wanted to be RESPONSIBLE, so he climbed down the hole and retrieved the flashlight which belonged to one of the dads. Yes, everyone had a good laugh.
For the most part, though, it was a solemn ceremony, with manly handshakes and congratulations from officials, family and friends. It is customary for the Eagle Scout to present his parents with a Mom/Dad pin. Kyle's mom, Robin is the scout master for his troop and works very hard. At the conclusion of the ceremony, Kyle presented his parents and step parents with their pins. Then, quite unexpectedly Mr. Madden looked around the room and surprised everyone when he announced, "And at Kyle's request, he would like to present one more 'Dad' pin to a man who has been most influential in his life, his grandpa." Bill cried, walked up front and hugged that big 6 foot tall kid, his oldest grandchild, his first grandbaby, his little boy. There wasn't a dry eye. It was a Kodak moment, a memory maker, a thrill beyond compare for Bill. Congratulations to our little builder who has achieved a great honor today and made one grandpa happier than ever.
Posted by Linda O'Connell at 9:41 PM
Labels: Eagle Scout

It take a saint of a kid, anyone!, to crawl into an outhouse. Yuck! Sounds like your good boy is on the way to being a great man...am sure grandpa helped too!

No dry eyes here, either!! Nice looking kid, too. Congratulations to all of you. Takes a lot of love and work and prayers to raise a great kid like that.

You both must be very proud...I teared up, too. What a wonderful gift Kyle gave his grandpa! Bill must have been beaming, and you with him. Congratulations to Kyle, and blessings to you all.

Susan, Claudia, Tammy, Lisa,
Thank you all for your comments. It was such an unexpected surprise and honor for my husband. And Kyle was just a LITTLE BOY when he went down the hole of the outhouse. ha-ha

That was indeed a tear jerker.