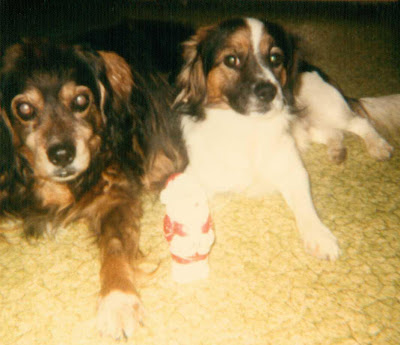 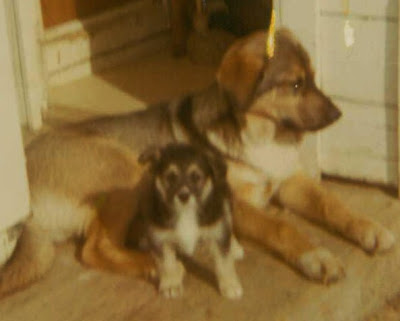 My friend, Gerry, is mourning the loss of his twelve year old Golden Retriever. I know that heartbroken feeling; the pain goes deep and it feels like it will never end. Dogs are not just our pets and companions, they are family. I just heard of a recent survey. Seventy percent of the respondents said that if they had to choose one, they preferred their dog to their mate.

I've had four dogs. Dusty, a mixed Springer Spaniel, was my baby. I got her when I was a newlywed. She went blind at fifteen but could find me anywhere in the house when I peeled an orange. She loved oranges and had a receptive vocabulary equal to a toddler's. She behaved better than my kids.


Willy was a goofy overgrown hound pup who stole (among other things)a neighbor's bra off the clothes line in Alaska. He was part Mackenzie River Husky which meant he had some wolf in his lineage, but mostly he was ruled by his comical hound dog genes and he was always getting into trouble. (He was really my ex-husband's dog.)

Buffy was my sweet girl. Her mom was a white poodle and her dad a husky, her litter was an oops! My friend and I were walking through the woods. We passed a homestead. We saw a big truck tire on the ground encircling a litter of pups. The owner was hawking the puppies. Most of them were brown or black or a blending of colors with curly hair and round little faces. One was smaller with husky facial markings, a pointed nose and Benji wirey hair. She looked like she had on thick black, mascara. My friend said, "Get this one and name her Buffalo." A free roaming buffalo herd traveresed our road at night. I called her Buffy. When she got older, she and Willy would wander off into the Alaska wilderness and often she would return home alone, so I'd send her back out to get him. She'd bring him home about the time that the sun slid down the back side of the mountain. She was so intelligent. Willy, not so much. (He was my ex-husband's dog.)

Rocky was a little black and white weirdo who chased flies on the patio for hours. The vet thought he was a bit 'touched'. (He was my ex's dog.) I came by him (the dog) most unexpectedly. My friend's dad was retiring from Anheuser Busch Brewery. She got this cute six week old little bundle of furry hyper-energy and named him Bud. She packaged him cuter than a Bud Light, put a bow on him and said, "Surprise Dad, this Bud's for you." Her dad said, "That's what YOU think. I've had enough Bud, Busch and everything else. I'm retired."

Each of these dogs had unique personalities; the females were smart. They were MY dogs. The males were testosterone driven because my ex didn't want to take away their ahem, manhood. My heart broke each time I lost one of them; they were family. Unless you are a dog owner or have been owned by a dog, you cannot imagine the depth of love, the connection and attachment a human can have with an animal. My sympathy goes out to Gerry and Mary Lee.

Years ago when my first granddaughter was four, we went through the bank drive through. Ashley was a little blonde cutie, who wore her hair in a thick pony tail. The teller sent the pneumatic tube on its way and said, "Thank you. Here's something for your little honey."

Ashley said, "That's me!" and flipped her blonde pony tail. She heard the clunk as the machine spat out the tube and she shouted, "A sucker for me!" I opened it up and out fell a dog biscuit. You should have seen the looks on our faces. I guess from five lanes away, her hair shaking from side to side resembled a dog's tail.

Special dog in your life?
Please sign on as a follower on my blog.
Posted by Linda O'Connell at 10:17 PM

Such warm thoughts on a snowy day. ANOTHER snowy day! You're right, Linda. Only dog people truly know the depths of love and loss. When I woke up this morning - around 9 - and looked out, two thoughts hit me. First, where'd the snow come from? Last night when Mary Lee and I got home, around 11, there was nothing coming down. Second thought: Hannah would love this. She enjoyed rolling in the snow, walking with her nose to the ground while the snow piled up around her muzzle. A muzzle that had turned as white as snow the past years. This was her kind of day. The stories of your dogs remind me of how special and unique each dog is, and the different kinds of joy they bring to our lives. At least I didn't have to deal with animals from an ex-wife. Thanks for including Mary Lee and I in your warm and funny memories.

Gerry, I teared up at your mention of snow...Hannah and the snow. It reminded me of Buffy in Alaska. She would hop friskily like a rabbit through the field of snow across the road from us. I love dogs. I hate snow.

I laughed so hard at all those parenthetical "He was my ex-husband's dog" bits!

Back in 1994, our five-year-old black lab mix, Barkley, ran away while we were on vacation. I'm convinced he thought we were never coming back. For years, I scoured the animal shelters looking for him. I never did get over him.

I am sticking with cats. They are hard enough, but at least, they are a little detached. The love of a dog is so big that it really takes something away from you. It's like losing a child.

Still missing my Biscuit. Until yesterday, I knew of two other Boxers in our neighborhood. Both males, they were bigger, and broader than my "Bissy." But yesterday, driving home, I saw a man walking another boxer. A female, she was muscular, but smaller in stature, her ears were not "done," and she jumped through that snow like it was the happiest day of her life. She reminded me so much of Biscuit, that I started to cry. My kids saw the dog, too. "She did look just like Bissy, mom," Jack said to me. I guess I'll never truly get over the loss of that sweet girl. ; )

All the dogs in my life have been my ex's :-), but I sure grew attached to them... I swore that was it, I wouldn't have a pet again. Kind of like ripping your heart out and then stomping all over it. After Norm lost his sweet dalmation, Pica he swore off pets too. But then the girls got the little stinker Smeagol from a friend. When the girls moved out, I said Smeagol wouldn't like living somewhere else, but we all know the real truth.

Julia,
The not knowing must be so difficult. I loved my cat as much as any dog I ever had, too.

Beth,
Oh that pain is so fresh; I am sorry for your loss.

Lynn,
I laughed out loud! Smeagol is a writer at heart.

I am all misty! I have a wonderful Lhasa Apso, Riley that is 12 years of age and showing the signs of a senior dog.

Riley's predecessor was Holly who only lived until the age of 8. I held her in my arms the day she was put down due to cancer and to this day when I think of it I can still feel the sensation in my arms as her breath left her body. Our pets bring us so much joy and unconditional love and when they pass it is a pain that is beyond words.

Have you read Rainbow Bridge? It is beautiful to read when our pet passes, brings some comfort.

Thoughts and prayers to Gerry!

Welcome Carol! Thank you for stopping by. Love pats to Riley.

My list of special dogs is endless. Most of them were mine, although I also had some very special foster fur kids. Each one had a distinct personality and endearing way of touching my heart.

Deepest sympathy to Gerry. I am dreading what life will be like without my 14 1/2 year old lab mix when the time comes. What a sweet post, and loved the laughs. (Even dogs didn't like my ex much.) :-o

Hi Linda...you know I can totally relate to this. I'm still mourning my Tiger-Girl, too.

Hey everyone...my "verify" word just now was petat! How weird & wonderful is that?! Pet at? Where will I find my next pet at?! :)

Pat,
They are like furry kids with distinct personalities.

Tammy,
The thought is unbearable. Enjoy every day you have with your ppoch. Give him/her a smooch.

Becky,
I know this must be so difficult. I think time numbs the pain but it is never far from the surface. Coincidence, Pet at: the Rainbow Bridge.

Yeah, the not knowing was the worst.

Just wanted to clarify--my cats are just as much my babies and loved too. It's just that they don't need me the same way a dog does. Know what I mean?

Julia,
I do know what you mean, because my tabby boy was my baby too. My son has a cat and dog. The dog is like a two year old who can't get enough attention, and the cat is lovable but could care less.

I have cats, and they aren't the least bit detached, as the other Julia above commented about hers. I love them to bits, and they all act like they love me to bits as well. And not just when it's time for a meal! LOL. Pets leave indelible pawprints on our hearts.

I jumped over from Critter Alley. Nice to meet you. I've had so many special dogs in my life. It's never easy when we have to say goodbye. Right now my special dog is my spaniel mix, Kelly. She loves to curl up around my neck like a scarf. Love your cute story about the dog biscuit! (P.S. We share a love of writing and I see we've even been in some books together. I write for Guideposts magazine, Chicken Soup for the Soul, etc, and my first book is coming out this fall.)