Creme in the middle, coconut on top

When I was a little girl, our home was located right behind a neighborhood confectionery. Oh those chocolate Hostess cupcakes! I loved those creme-filled delights, and I never understood why Dad peeled off the chocolate icing which had a little white squiggle down the center.

He only liked the cake. To tell you the truth, I prefer the cake with only a small taste of the too-sweet icing. That little white dollop of creme in the cake center makes me salivate thinking about it. Dad also liked jelly roll snack cakes, but his favorite was 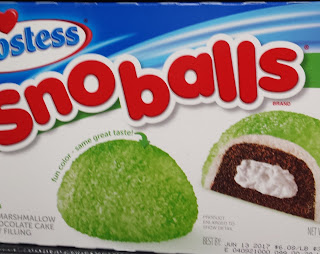 Snoballs originally were white, but now come in a variety of colors for special occasions.

In case you haven't purchased a Sno ball in a while, they have melted, um, shrunk, to half their original size.

First introduced in 1947, the coconut-covered, marshmallow-frosted cakes were white, and they lacked creme filling until 1950. At one time manufactured and owned by Hostess, they are now owned by private equity firms, Apollo Global Management and Metropolous & Co.

When my children were in elementary school, I accompanied them on a field trip to the local Hostess Plant. We rode through the factory on a tram and watched how Twinkies are filled and packaged, and we observed how a machine put perfect white squiggles atop the chocolate icing on the Hostess chocolate cup cakes.

A supervisor came into a break room with a selection of snack cakes for everyone. I was as thrilled as the kids. Ding Dongs, Banana Flips, Ho-Hos, mini chocolate donuts, fruit pies. I could go on and on traveling down Memory Lane.

We were at the grocery store and came across a little Snoball gem all by itself on the bread shelf. Discarded by a hectic mom who snatched it from her toddler? A second thought cast off, reconsideration from someone whose jeans are getting snug? A leftover from St. Partrick's Day or dare I say, Halloween?

WOW! Did the hand painted windows at the restaurant take me back to when I was eight years old. At holiday seasons all of the neighborhood merchants selected 8th graders to paint their windows. I so wanted to do that, but by the time I made it to eighth grade, the practice had faded.

When I became an early childhood teacher, I'd get out the tempera paints and allow the students to paint "fireworks," and flowers, and holiday decorations on the windows. Yes, of course I participated!

Talk about brilliant, almost blinding light. Look at this! The sun made an appearance. 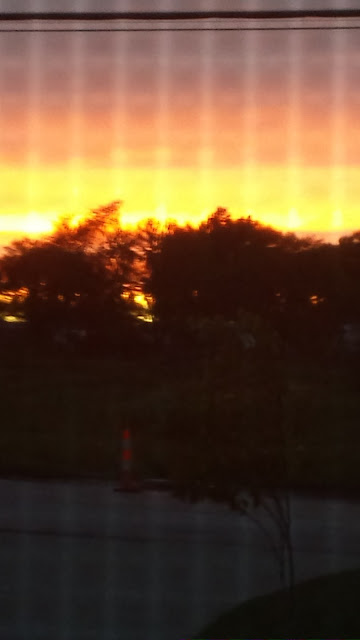 So, Thursday night, at 8:00 p.m., on a very cold and cloudy day, this is what filled the sky. I can't tell you how I rejoiced. The flood waters have receded and the cleanup has begun in our town. We were fortunate not to have been affected by the two month's worth of rain St. Louis received in a few short days.

I know you may think I am "snowing" you, but during the stormy weather, Western Kansas was receiving four inches of snow per hour. Crazy weather!

Linda--I'm glad the flooding didn't cause a problem at your house. If it had, you could have put Sasquatch in a slow boat to...?

Oh, I loved snowballs. They were real treat...they were for brown bag lunches when I had to go on field trip or and of school picnic, etc. I got one a few years ago...couldn't finish it as it didn't take like the memory ones did!!!!

I LOVE Snowballs! And the icing on the Hostess Cupcakes is the BEST part! Haven't had either one in quite while.

Remember those commercials a few years back, "Hey! Where's the cream filling?"

I remember those creme-filled centers. That was always the best part in my mind. I'm glad the sun has returned and the rains have stopped for you there.

There aren't many sweet treats I don't like, and while this one wasn't among my very favorites, I would never refuse to eat one. After all, it is filled with sugary goodness!