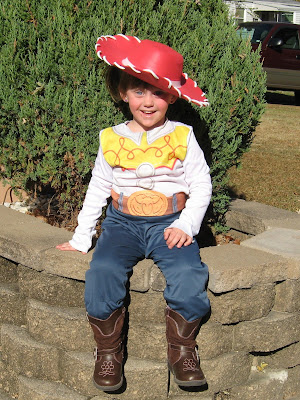 Nicole turned three years old the day before Halloween. She is somewhere between "I'm free to be me" and "I am the princess." She is obsessed with Jessie, the cowgirl character in Toy Story. She had a Jessie birthday cake, and had to put on her Jessie Halloween costume. 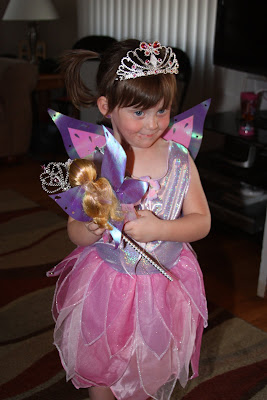 She's also my little princess. She quickly ditched her Jessie outfit when she received this fairy princess outfit. She makes me smile and laugh out loud. She is so loving. Today I babysat and took her shopping. She saw a Muslim woman with her little girl as we went into the store. The three year olds waved at one another. Nicole passed her by with a big smile, then she dropped my hand and ran back and said, "I've got to hug you!" The two little girls were so cute, a confirmation that prejudice doesn't exist at age three.

She also saw a little person, an elderly midget woman in line in front of us, and she thought she was a child. Nicole held up the new skirt she had selected and said, "You like my skirt? You wear one too?" Thankfully, the lady was nice and talked to her.

Nicole also made me belly laugh in the store. As we perused the toy aisle she kept saying, "Nana! Barbie's butt's broken." I tried to shush her. I thought she meant that she had broken the legs off one of her birthday Barbies. When I rounded the corner she spied Make-up Barbie, a bust with long flowing hair that little girls like to style. She shouted, "See, Nana, Barbie's butt broke off." You've got to love it.
Posted by Linda O'Connell at 5:51 PM
Labels: Toy Story characters

And you're right when you say - you have so many parts - so do I! teehee

Funny! She's a cutie. Happy Birthday to your little sweetheart!

Hi Sandie,
Thanks for stopping by. Like Nicole, we too wear many hats, don't we?

Hi Karen,
Now I may/might hop over to visit your blog. Thanks for that informative post.

How adorable! She knows how to take a picture, too. Happy birthday to Nicole!

She's such a cutie! And so funny too! She must take after her Nana!

Happy birthday to your Cowboy Princess. She sounds like one of a kind. It doesn't hurt that she's beautiful, of course!

Tammy, Lynn and Lisa,
Thank you for checking out my little missy. She is a hoot. My oldest granddaughter, now 21 was even funnier at three and got newspaper write ups because of her personality. I am blessed.

She's adorable and so funny!
You are truly blessed.
Donna

Hi Donna,
Thanks. I feel blessed!