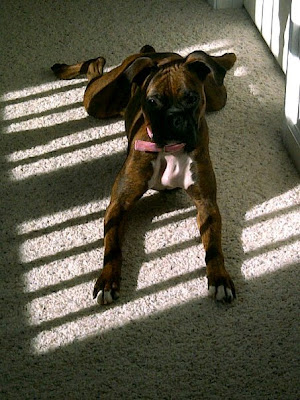 This is Riley, my great-granddog. My 21 year old granddaughter, Ashley, got her when she was no bigger than a handful and just a few weeks old. Riley thinks she's still a boxer pup, and she tries to climb in your lap. She hears, "Down, Riley, Down!" quite often. She has a new bunk mate, a white boxer named Mack. They snuggle and entwine their legs when they sleep. Each has his or her own bed, but Riley thinks Mack is her play toy. She is a bit high strung and he is exactly the opposite.
Mack is having a wonderful calming effect on her. Look at him snoozing with his head on his back! 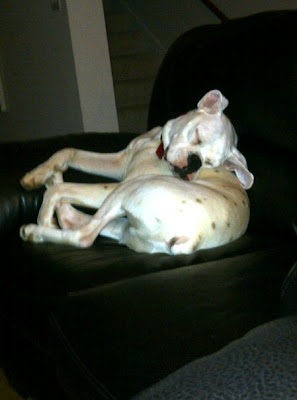 They are both happy to be indoors after frolicking in the snow. We received about five inches, but twenty miles west, they received nearly a foot.
Why is it when dogs and children are sleeping they always seem more precious? 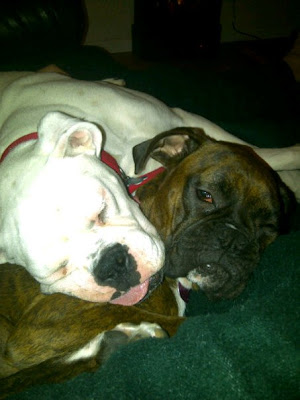 What great photos! We got hammered here. My guess is about 10 inches or more.
Snowy days bring out the best in dogs and people.
One of our neighbors has a snow blower and is clearing off driveways. Our neighbors are the best!
Donna

Well I'll be darned. Those are the cutest dogs, Linda. It's like "doggie" instead of "puppy" love. "Key-ute." Susan

What cute dogs! I was raised with a boxer named Duchess (extremely high strung, but she was a great companion and partner in crime). That is the first white boxer I've seen. I'm sure they have fun together.

Awwww! They are so cute!

You know I'm a sucker for dogs, and I love Boxers. They are such cool canines, silly and playful. These two are adorable! Thanks for sharing. I love it!

Dayle ~ A Collection of Days said...

Your dogs are gorgeous! I can't imagine what a foot of snow is like. We just don't have snow where I live.

Welcome on this very snowy day. It makes me happy to hear from all of you. Yes, these two dogs keep my granddaughter hopping, but she'd have it no other way. They are her babies.

Hi, Linda! I wanted to stop by for a visit and say "thank you" for your lovely comment. I love the photo of the dogs, and I must say I had quite a laugh while reading your post about embarrassing moments! :)

Oh Linda...they are just so precious! As a dog lover myself, I can appreciate the dogs that want to jump into your lap, even though they are quite large :-)

Thank you for stopping by the cottage today...your visit brought so much joy!

Oh aren't they so cute together. Thank you for visiting my blog and leaving such a nice comment about the camellias. I feel a little guilty about posting flowers when I know what a difficult winter people are having and our weather is so temperate here in California, but maybe something so pretty to look at cheers everyone up...I hope so. Have a great day.(-:

You "little" fur babies are just adorable and they look like they really enjoy each others company.
Does your Grandaughter have a blog, I would love to see some of her work. I have only really been taking photos for a couple of years and just take what catches my eye and touches my heart. LOL..my DH says it's my artist eye that sees all of the interesting pictures in ordinary things.

You totally gave me a smile before heading to bed this evening. You're so right about children and dogs being yet more precious when they're sleeping.

Loved that last picture the best!

Thanks for sharing about what you are reading over at my blog. I loved reading the comments!
Elizabeth

AWE what a sweet post. I have to say these dogs (and children)do seem sweeter when asleep.

Thank you for your sweet words and stopping by my blog today.

I love big dogs!
Yours are very cute and sound like great company :-)
Cute kids and dogs - they sure bring us much pleasure in life!
blessings..Trish

That is the best picture of them sleeping together!!!

Yes they do seem more precious while they're sleeping. Maybe because it gives a false illusion of them always being peaceful and cooperative? You think that has something to do with it? hehehe No, but it does warm our heart. These pics are gorgeous. I'm so glad you shared them on simple pleasures.

Thanks for stopping by yesterday. Making the rounds today. Enjoy your weekend. Much love!

Those pictures are just precious! We got so much snow here that it's a little entertaining to watch my dog try to maneuver through it. He has to hop because it covers most of his legs. And he's a 60-pounder!

He is big, but so cute. sandie

Cute pooches! I'm not a "dog person," but I've always found Boxers to be quite charming in appearance.

Oh wow...those photos are adorable. Thanks for stopping by my blog and leaving such a nice comment. I can't wait to check out what you've been blogging about.