I am linking up with Lisa at Writing in the Buff. See if you can write a back of the book blurb in 140 words using this picture as a prompt. 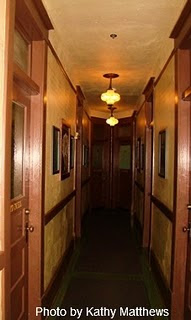 Mason High was no more or less out of control than any other public school.
When the intruder alarm sounded and the secretary’s voice screeched a high pitched code word, teachers rushed to deadbolt their classroom doors and flip off light switches. Unruly students huddled in corners and speculated in hushed tones. As teachers tried to maintain order, a male voice bombarded the airwaves.

“You are now under my control. Principal Perkins has no authority whatsoever. Do you Perkins? Speak directly into the mic.”

Robert Anderson had always been a bit of a rebel, but usually the administrators could quell his minor disturbances. Robert was on an unstoppable rampage.

“If my demands aren’t met, everyone in this building will choke on their prayers and swears. Listen up!”

As Anderson makes his demands known, Kyle Horstman decides to play hero.
139 words
Posted by Linda O'Connell at 6:22 AM

Now you mention it, the picture definitely is of a school! I love the blurb. I'm anxious to find out how he intends to carry out his threat, and how Kyle will attempt to foil him. Nice one.

Am now following your blog - pleased to meet you.

I agree with Tony. I'd love to see how this "unstoppable rampage" ends up. And the phrase "prayers and swears." Great combo!

(I am so embarrassed. I thought I spritzed on enough Michael Kors to camouflage the Vicks. I guess I will have to tuck my cougar tail between my legs and slink away...)

Tony,
Thanks for following and for your comments.

Sioux,
Quit! You are giving me laugh lines!

I like the idea of the corridor being in a school. Great blurb and terrific potential for the whole book....which I'll be in line for!

I never once say this hallway in a school until you mentioned it and then I saw it vividly. Amazing how we all look and "see" differently. A great take on the story line too!

Great how you imagined such a tension-filled scene out of such a pretty, calm picture!

Unstoppable rampage in a school! Sign me up! Go Kyle go!

Wow! Awesome blurb, Linda! You are really good at this!!

What a great idea to use a school as the scene. I want to know where the story's going, I'd buy the book!

Glad you joined BBF - you'll be sucked in and with the way you write, well... the books are just waiting to be written.

Wow, your take on the photo and story is very original, and of course your writing is excellent, Linda. It is scary, because it is real to life.

Have a great weekend,

I sure hope they got the bad guy! sandie

Hi everyone,
I so appreciate your positive comments. You make me feel like I might be able to actually do fiction.

How tantalizing! Especially to those of us who have to have "intruder drills" on a regular basis. I definitely must know what Kyle Horstman has planned!

Hi Linda...Keep writing! I want to read the rest of it. ha!

By the way, thanks for visiting and commenting on my blog. Love having you stop by. Susan

Hi Linda,
Intriguing blurb. "Everyone will choke on their prayers and swears" hooked me.
Donna

Great job, Linda! I find it particularly scary because it mirrors events of school rampages. Frightening stuff. I'd love to know how Kyle plans to save the day. (He does save the day, doesn't he?)

Very curious indeed-you have me asking several different questions and wanting to get to the bottom of all this!

I want to know about the inner workings of Robert's mind...you know, I have a thing for sick and twisted.

This story is stewing in my head begging to be written, so maybe I will have to dedictae my book to all of you!

A great take on the picture. This promises to be a really great story. I'm glad you are thinking about developing it :)

Thanks for visiting and following