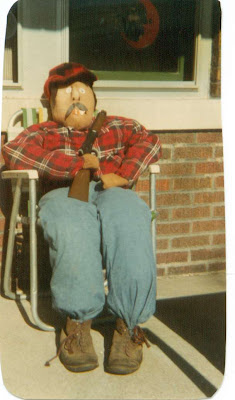 My former husband, an auto mechanic knew his stuff about cars. However, he had a disposition that I referred to as mechanic's mentality: lug nut, crank shaft, hammering piston, boiling radiator, speedometer in the red zone. We were like fire and fuel, and I admit, my mouth fanned the flames.

We lived in a brick house, in a middle class working neighborhood, on a one way street. The neighbors on either side of us were aging and had been long-time residents. The retired immigrants who lived to the right, kept their property immaculate. They were what was referred to as Scrubby Dutch. The missus would come out every Saturday morning with a bucket of steaming sudsy water and scrub the white marble stoop, four steps, and the porch. The mister would mow his lawn closer than a young man's crew cut. Often we found a big fat swath cut from our grass. This hint-indicator irritated the mechanic as he only mowed on weekends.

The retired white-haired couple on the left were an odd couple. He was mild mannered and soft-spoken; she towered over him figuratively and literally. Both sets of neighbors were friendly, but they knew that the mechanic was usually one spark plug away from firing off an opinion.

One Halloween, our daughter and son wanted to make a scarecrow. They wadded up newspaper and stuffed a pair of their dad's blue jeans, a red, plaid, flannel shirt and a pair of my discarded suntan colored panty hose which we used for the scarecrow's head and arms. I drew on facial features and added a mustache and a cap. We propped him outside on a chair on the porch and added a pair of work boots. Eight year old Jason, asked if he could give the scarecrow his rifle. Why not? I placed that rifle in the life-sized scarecrow's "hands" and took a photo of our masterpiece.

I saw the neighbors to the left drive up. I stood inside the open door and listened. I couldn't wait to hear their reaction. They did not park, they sped past the house, not once, but twice. The third time, they parked in the alley. I peeked out and saw them hunched over creeping quickly to their back door. I wondered what they were up to.

The next day, I was in the back yard with Dusty, our spaniel-mix, when the neighbor man walked out with Fee-Fee, his white toy poodle.

"Well, to tell you the truth, yesterday when we came home, I started to park in front of the house when I saw your husband on the porch, wide-eyed, looking like he was about to go off half cocked with that rifle in his hands. I drove around a couple times, then decided to sneak through the back door. My wife looked out at him a time or two, and then we realized it was a dummy."
Posted by Linda O'Connell at 8:10 AM

Funny story, LInda!! Happy Halloween...your little ones with have a big school day!!! Tomorrow they will either be sugar high or totally depleted!

That wasn't a scarecrow - that was a scaretheneighbors!

I'm sure it didn't help that you used the husband's clothes for your guy.

It was a dummy, just not THE dummy.

My first husband did auto body repair work. I think there may be some brain meld thing going on with guys who work on cars...just sayin'.

Ha ha ha haha And you even had a photo of him! Hilarious. Happy Halloween, Linda. Susan

LOL I love how you describe a story and the way you weave such great detail into it!!

Now that's what Halloween is all about, Linda. Scaring someone. Not this Batman/Little Mermaid/Superhero charade with the endless run of "knock knock" jokes. Your dummy story is a beautifully remembered Halloween, made all the more effective by the reactions of your neighbors. By the way, I just read that the most popular show on cable TV now is "Walking Dead." Yes, zombies are big this year. And I am a big "Walking Dead" fan.

Great story...and I could see it happening!

HA! If only the real husband had sat so still and quiet ; )

My goodness - a very life-like dummy:-)

That was funny - I think - what did your husband think about it? sandie

My husband did the opposite. But without the gun. He dressed like a scarecrow and sat on the porch with a bowl of candy and a sign to take one piece. When a kid took more than one, he reached for the offender. There were some mighty scared kids that Halloween.

This happened before he was my husband, when we both lived in the same apartment complex. So I had no veto power over his shenanigans. He looked A LOT like your photo, but with overalls, an old man mask, and a straw hat.