They THINK they are just playing


HAPPY THANKSGIVING FROM MY CLASSROOM TO YOUR HOME 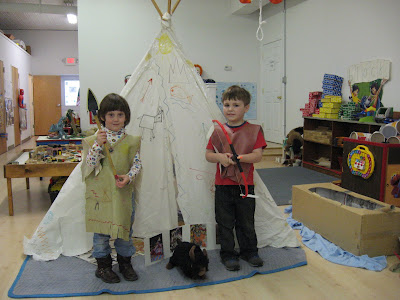 Nicole and Daniel in front of the tee-pee which they decorated. They are ready for a bear or buffalo hunt. They shot the nerf bow and arrow at turkey, bear and buffalo targets. If a messy desk is a sign of brilliance, well, please disregard the messy classroom. It is the end of the month and we collect a lot of clutter. Oh, but experiential, hands-on learning is so much fun and is developmentally appropriate. Little children should be moving and exploring, not sitting at a desk doing paper/pencil work. 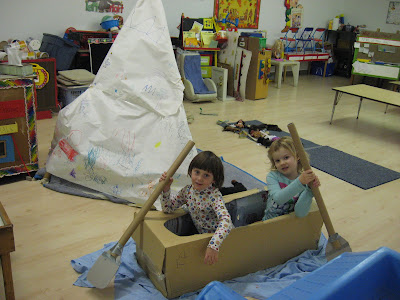 Creative dramatics, Nicole and Nina rowing downriver. All we needed was a box, cardboard oars, and a blue sheet. The boys insisted on fishing poles. We also sat on carpet samples, paddled our canoes and 'tipped them over', that is, WE tipped our bodies backwards and spilled out. You should have heard the gleeful laughter. 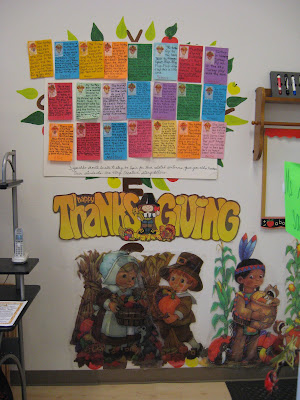 I believe that literacy is one of the greatest gifts that we can give children, and so, I encourage story telling. Parents read aloud and the kids see their words in print. If you can enlarge it, read Daniel's to the left, on blue paper. 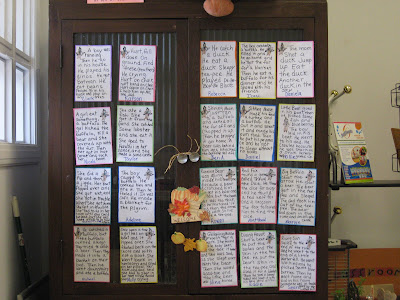 We are great story tellers, as were the Native Americans. You can certainly see which stories were dictated by the three year olds and those that were told by the four-five year olds. The 4's & 5's chose their Native American's Name by using their imagination. They closed their eyes, pretended they were in their Tee-pee (tipi) and peeked out. The first thing they 'saw' was what they named their main character. They also examined buffalo and bear pelts borrowed from the Department of Conservation. They learned how every part of the animal was used for food, clothing, bedding, shelter, etc. their parents were amazed at the facts they told THEM. 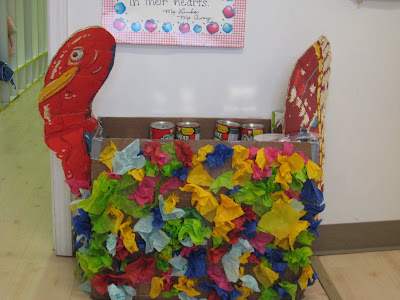 Albuqurque the Turkey targets many areas of learning.
Speech: we touch our throats to learn where the "Q" sound comes from, and we touch our mouths when we say the "T" sound. Otherwise they call it AlbuTurkey.
Finger strengthening: twisting tissue paper
Cooperation: working alongside a classmate
Empathy and generosity: the children help STUFF the food into the box and learn about donating to the needy (those who need it but do not have it). 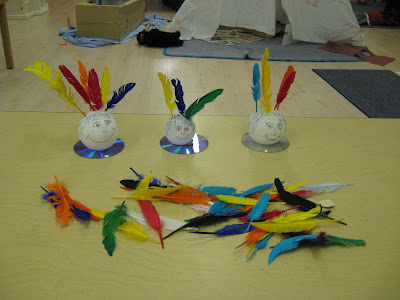 The children think they are just playing, but sticking feathers in styrofoam develops and strengthens small muscles in the fingers/hands which children use when printing. Some of these had turkey heads. We also laid on the floor and blew feathers, stood and caught (the snipped off top, soft part) them as they drifted down, staying focused and in control :)

When people ask me what I do, I reply, "I teach preschoolers."
When they say, "Oh, you babysit," I want to bring them to my classroom for one day.
Posted by Linda O'Connell at 5:59 AM
Labels: early childhood creative dramatics, preschool activities

And isn't that "play" the best kind of teaching, when the students don't even realize they are learning. It sounds like you have a great bunch of kids in that class!

Wishing you a Happy Thanksgiving ...

I'm visiting new blogs today for the first time, so i also thought id wish you a Happy Thanksgiving to you and your readers. And i hope that the day is spent generating positive memories for years to come. Richard from Amish Stories.

BRAVO!! BRAVO!! These pictures, which clearly show explicit instruction, epitomize just how an excellent teacher creates interactive, hands on lessons. These types of lessons fully honor Howard Gardner; who identified/labeled different learning types.
I am an educator who knows that lessons which involve all the senses and require teamwork are the ones that students will never forget. What looks like play, to the naive who think you babysit, is mindful work and this work that is accomplished by play are the only lessons which fully engage each learner. This playful work has a lifelong impact; critical thinking is developed and the joyful curiosity of learning continues. Linda, you are building the finest foundation. I can only pray the teachers they have later on are consciencious,quality builders too!

Linda, you are a wonderful, creative educator! Wish you would have been my kids' teacher! Have a great Thanksgiving.

Great post! This is a great time of year to be in the classroom too. I loved working elementary days between Halloween and Christmas!

Wow - that tent is amazing! My class would have loved something like this!!

I encourage my granddaughters regularly to read, read, read. One loves it, the other does it because she has to, haha. Either way, they are learning so much. Nice post.

What fun these kids have while learning! I love the tent and canoes.