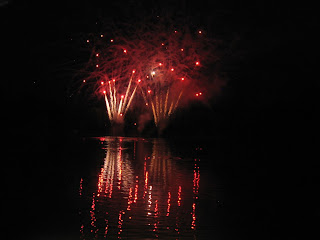 These are two of my most impressive fireworks photos taken lakeside on July 4th.
I wish I had a better camera because you can't see the ducks swimming in the reflection of the fireworks. They stayed on the lake. It was an incredible sight to behold. 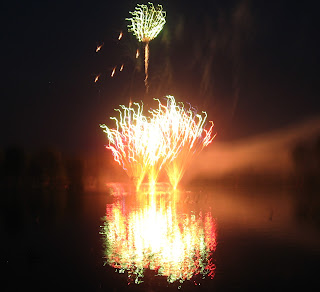 So now, let's get around to name dropping. I was on Facebook and read two posts yesterday that reminded me of an incident long ago.

At first, I was impressed, and then as I read further into each post I noted that these people were not actually seated at the table with these VIPs, but actually dining at the same restaurant.

Years ago I dropped an impressive name. I had to go downtown to the Board of Education main office to check on where my check was, as nobody seemed to know. I was being given the run around. After an hour I came full circle, having traipsed three floors and spoken with three department heads. I'd had enough. I walked into the next office and explained that I had left numerous voice mails, to which the woman replied, "Oh, I never listen to those."

I was seething by the time I explained my story yet again. She said she couldn't help and directed me to payroll. I walked in with my head high, made direct eye contact and said, "I just spoke to Superintendent, Dr. ___ and I have been directed to come see you about issuing a replacement for my lost check."

At the mention of the superintendent's name, the slouching woman sat up, asked for my information and promptly resolved my problem.

Did I lie? No. The superintendent (who was already in the elevator) and I greeted one another with a cheery smile and hello. (I did speak to him!)

I WAS directed to the payroll office. I didn't say WHO directed me.

I stated my problem and how I wanted it resolved. I got results.

Name dropping has advantages. Have you ever had a celebrity encounter or dropped a name?

Jim Hart, quarterback of the old St. Louis Cardinals football team, appeared at my front door and asked directions. That's my only brush with greatness.

Ha! Good one, Linda. I will remember this and try your technique. I did have a run around with Sears at Christmas. On Dec 23 with a hole in the kitchen and company coming I finally told them I was having a dishwasher in by noon Christmas Eve and only they could know if it was going to be a Sears one. Final answer...they moved on it and FOUND it.

Only two. I went to 7th grade with Colin Firth (he lived in St. Louis for a year or two) and once I stood next to Stan Musial right next to his statue, and just thought he was some old guy in a leisure suit.

Way to think outside the box, on your feet, Linda!
I used to be SO star-struck, but after near a decade working at a TV station (while living in Florida), it finally dawned on me, they put on their pants the same way as you n' me. Generally, most were genuinely nice. My personal fav was Frank Gifford.

Ha ha ha ha ha That was a good story, Linda. Gee, I can't think of a time I name-dropped but I probably did.

Hope your fourth was good!Susan

Perfect! I've met a few 'names' in my time, some military, some academic, some show biz, some Royal . . . we're all the same under the skin - it's just that the skin is differently (and more expensively) clad;-)

Kudos to you for your quick thinking! I had brushes with a few when I worked in Los Angeles, but that was so long ago... I agree with those above...same, just different clothes! Enjoy your weekend!

Nice maneuver over and through the indifference and red tape. Next time I run into a pile of the stuff I'm gonna tell them Linda O'Connell instructed me to tell them where they can go. Bet it works!

I haven't had much contact with anyone very famous. Good for you for finally getting someone to sit up and take notice and get the problem solved for you!

My husband and I ran into (almost literally!) The Smothers Brothers when we were on our honeymoon in KC....30 years ago! That same evening, we also shared an elevator with Joan Rivers. They were doing shows at the hotel we stayed in.

Yes! I was asked recently to tell something unusual I may have done for a school scavenger hunt. (Hunters were to track down the teachers that they thought matched the description.) I wrote that I had once danced with the Village People. True story. We were at a party hosted by hubby's company in Las Vegas and the Village People were the entertainers. They came onto the dance floor and I got to dance with them. Nobody doing the scavenger hunt even approached me to see if that was me. Mild mannered Mrs. R. would never do the YMCA with the Village People...would she???

We had a few celebrity encounters when we lived in Vegas, but never enough that I could drop a name. :)

I shook hands with the mayor of St. Louis and didn't even know it. Thought he was a greeter valet parking attendant when we arrived at an event. I'll have to remember your story when I need things...

When I lived in the village we had the luck to have two actors come over for a friendly game of bid whist. It was more than 40 years ago and I can't even remember their names, so could not drop them if I wanted. lol

Don't know anyone famous or encountered them, but I once knew a rolls royce mechanic and if he had a car overnight and took it home to work on it he would sometimes take me and my children for a ride, that was always fun.
Merle.......