The river was still closed due to the sinking of a tug boat, and the cruise ships could not get into port. Passengers were directed to report at 8:00 a.m. to the  Port of New Orleans where we were to board motor coaches to be transported to the Mobile,Alabama Cruise Terrminal, which had been closed for two years.
Bill and I were going to be first in line. We were up and on our way by 6:30. We joined a line of traffic and were directed to an unfamiliar New Orleans terminal and parking area by officials who didn't have a clue!
Bill dropped me and the luggage at the front door where the security guard told us to wait for someone to let us in. There were a dozen families ahead of us. I couldn't get in line with four pieces of luggage, so I stood at the main entrance off to the side while Bill parked. The line continued to grow longer.

I watched as Big Bubba with his belly hanging out of his T shirt dropped off his mama and twenty pieces of luggage. I did a double take; she looked exactly like the late Irene Ryan, you know, Granny on the Beverly Hillbillies. She twanged just like her, too. She narrowed one eye and looked at me.


"I cain't get in line neither 'cause we're waitin' fer ALL the fam-i-ly. There's Orin, Mion and Urin, and they even in-vited the mother-in-law. Be daimned if they think I'm gettin' stuck with HER!"
Sometimes it's best to just smile and nod. I bobbed my head furiously and waved frantically when I saw Bill walking my way. I told him about the woman's kids' weird names, and then it hit me, she meant "Ours, Mine and Yours". I went to get in line while Bill entertained the idea of talking to her.


We watched with frustration through the glass front doors as people trailed into the terminal through the back doors. NOBODY knew which door should be the Customs entry point. Finally as the masses on our side of the demarcation line got restless and ticked off, an official woman came and fielded our questions with, "I don't know what's going on, but I'll find out."

I told her we had found out that people were entering through the other door. I started to walk away and she said, "Stop! You can't go in there." At that point another woman came and told her that we should proceed to the back entrance. Bill and I trotted like race horses around the corner, went through Customs and right onto a bus for the scheduled ninety minute trip.
We arrived in sixty minutes. You do the math. State patrol had pulled three motor coaches over for exceeding the speed limit. We weren't one. Arrived at the Mobile Terminal which had been closed two years. An older man boarded the bus and said, "You all are sterile, so you can't get off until we figure out what's going on. Once you get off, do not stop to smoke a cigarette or you won't be sterile anymore."
WTH did smoking have to do with anything? He meant we had already passed through Customs and had to proceed directly through the terminal door and through a scanner. We waited twenty minutes on the bus while they scrambled to get full staff  from Port Canaveral in Florida to operate the closed Mobile terminal. It was utter chaos. They admitted THEY didn't know what was going on either.

Finally we embarked the ship and sat down to people-watch. The first indication that I might have seen one of Granny Clampett's kin was the obese woman strolling down the promenade wearing a shirt emblazoned with I BEAT ANOREXIA.

Having skipped breakfast, we headed upstairs to Guy's Burger Joint (from the Food Channel) and had one of Guy's  Famous Burgers. Yum! Worth the wait!


We found our cabin and no sooner settled in when someone rapped at the door. A bottle of complimentary wine. We don't drink. Another knock on the door. A large fruit and cheese basket (on a ship that is a rolling buffet), so we ate the humongous concord grapes and gave the rest to our Malaysian cabin steward who appreciated it, or hocked it, or whatever.
We walked out onto our balcony to watch the ship take off. What we saw was a fully staffed Coast Guard boat approach, weapons at the ready. When a small pleasure craft with a  family came too close to the ship, one of the guys ordered the boat to move away. Someone on a balcony above us shouted, "They're not terrorists!" In this day and age, I guess you don't know.

Overhead, local television news crews hovered in helicopters. Reporters lined the street with live cameras. Shhh! Maybe my 4:00 a.m. call to CNN did make a difference. Maybeeeeeeeee...THAT'S why we got wine and fruit. The CNN reporter thanked me for breaking the story as they had heard nothing about another Carnival incident. Granted, it was an unforseen accident, not due to Carnival Cruise line, but this was not a carnival atmosphere, let me tell you! 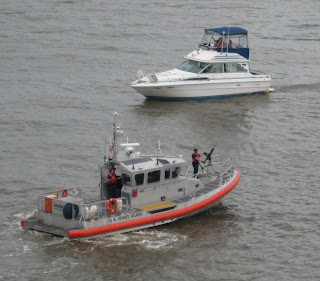 Bon Voyage! We needed a nap after the belly full of burgers and sights for sore eyes.
Posted by Linda O'Connell at 8:22 AM
Labels: Carnival Conquest, CNN, Cruise

Linda--How will you top this next year?

Just too incredible. Your description of Granny was funny. Hope the rest of your trip was pleasant. I am more convinced than ever NOT to take a cruise.

This wore me out just reading it! I would have given up by now I think, and yes, I do hope the rest of the trip got better once you were at sea!

Oh dear. It looks like the universe found somebody else to conspire against this summer! That anorexic T-shirt made me snort.

You are brave. Granny wouldn't have scared me off, but all that talk about who's sterile and who isn't would have.

Well on the bright side this will certainly be a trip to remember.

Hi Linda...Will there be a part 3? I HOPE the rest of the trip went well. Susan