Not asking for permission

In an effort to calm myself and those who read my blog, I will not participate in political bashing. I am soothing my ache with pictures of my fur babies. 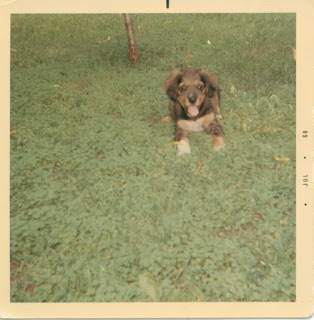 She really was my first baby. I loved her so much. She had a large receptive vocabulary. I could tell her to get a specific toy, and she would. One time I came home from work and found her rolling in chicken feathers. She'd  ripped up a bed pillow and was having a blast!

During the time she was my girl, in 1977, I had to have a tubal ligation. My then-husband took me to the hospital in an icy snow storm for an overnight stay. The staff panicked the next morning after they had already prepped me.

When they realized they could not proceed with my procedure because they had failed to get HIS written permission for a procedure on MY body, they made a conference call with him, me, the Hospital Administrator, a nurse, and doctor as witnesses. They made an exception and obtained my husband's expressed verbal permission to operate on MY body as if I were his property.

Ladies, think long and hard about that. We've come a long way baby! The results of the presidential election may take us all back to those days. I believe women, not the government, husbands, or hospital administrators, should have control of THEIR bodies. I am not pro abortion by any means, but I respect a woman's right to make her own decisions. 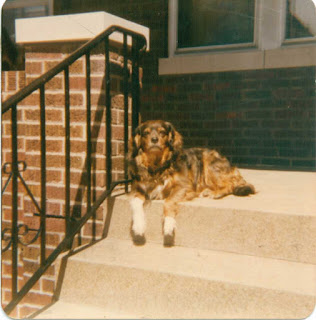 This puppy was six months old, a kooky, big oaf who couldn't keep his tail up, and it often dragged the ground. 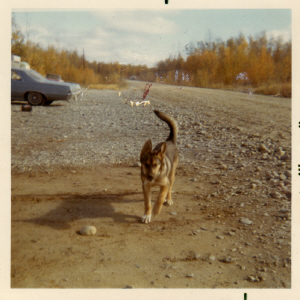 This little sweety roamed the Alaskan wilderness with him and often brought him home at night with his many finds: the neighbors bra, a kid's hat, a butchered moose leg... and the list goes on and on. 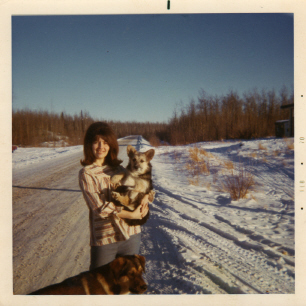 She had the brains, and he had the brawn, and I had big hair in 1970 when I was in Alaska expecting my first baby. My then-husband could not be present when I gave birth, nor was he allowed to see me at 10:00 p.m. after visiting hours and having worked an overnight shift and driven 100 miles to the army hospital. Times were different then. Kitty No-No makes me happy, even though he is not the brightest. He is the sweetest! He has a one word receptive vocabulary. If I say the word "eat" he runs to the kitchen. 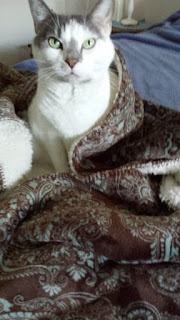 Here he is being duped by false promises, hopes and dreams, as many Americans have been by an overbearing man with the temperament of a toddler and the codes to nuclear launch, our future president. 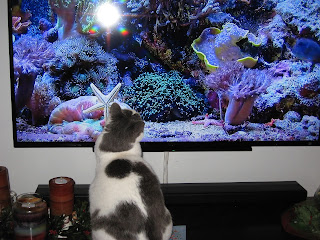 I hope you come back. I will be posting an announcement about an event next week.
Posted by Linda O'Connell at 9:31 AM

I was going to cancel all American (well, US, followers really) and never read another of their blogs again, but there are so many like you, so I can’t really do that. I can weep with you, will that do for the moment?

I shall hide in Millie’s fur, stay in my warm and cosy house, and pity all those who followed the (orange) Pied Piper. I have said it in several commentaries: The Great Brotherhood of Morons is on the march everywhere.


WHAT. When was this, if you don't mind my asking?

I enjoyed seeing your furbabies. Thank you for sharing them. I can use a bit of softness and love today. I think we all could.

Cutie-patootie pups and kitties. They have a way of soothing our souls, don't they?

I remember when I couldn't have a credit account in my own name (that was in the 70s); I could be the secondary member on my husband's account.

Women have been left behind and forgotten for too long. The progress that has been made up until now must not be lost. There are more of us than them (males) - I cannot fathom why a woman would ever vote for that candidate.

many women are easily led, my mom used to say. I would agree.

Linda--Your hair was bigger than you were. ;)

Yes, it is sad and disappointing but we have to move forward.

Thanks for sharing your photos. It makes me yearn for your (finished) memoir.

Aww...I was just sitting here, working in bed, with my own furbaby curled up against my foot. I thought, "How could anything be bad in a world where there are dogs?!"

you have cute far babies.. they are adorable...

Whew! I was so relieved to see that your first fur baby, rolling around in chicken feathers, had only ripped open a PILLOW!

Cute pics of your furry friends... and I love your hair! xo