Have you noticed any changes lately?

Despite the fact that I was stung by a bee on the side of my forearm Monday and am having a reaction, as in red, raised, hot welt, itching and burning, I still went into the yard among the winged stingers as promised, so I could bring to you the blooming Sedum flowers and all the insects they attract. That is not dirt near my elbow; it really is a shadow. 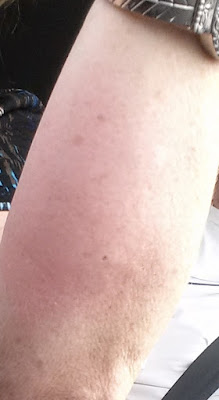 This is a Cercropia moth. I know because I used to "hatch" one in my classroom. Moths have feathery antenna as opposed to butterflies which have spiky ones. 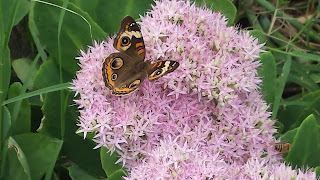 I ordered a cocoon from a science lab and kept it in a screened cage for weeks, and on Show and Tell day, I would remove it, gently place it in each child's hand and shake it a bit so they could feel movement inside. One day we came into the classroom and it had nibbled its way out of the cocoon. We read about and observed, and acted out the metamorphosis of the caterpillar. A couple days later, we took the moth outside, placed it on a bush, recited the caterpillar poem, and sang the butterfly song, and watched it fly away, high over the rooftop of our school.


My friend, Sioux, who knows how much I love the beach,  gave me this wonderful shell hanging wind chime. I sit on the patio gaze at it, reminisce, hope, wish, pray, and observe nature all around.

This week the yard activity is spectacular, because the sedum is in bloom, attracting many insects. Birds are chattering and cardinals are frequenting the bird bath as fat rabbits sit and watch. 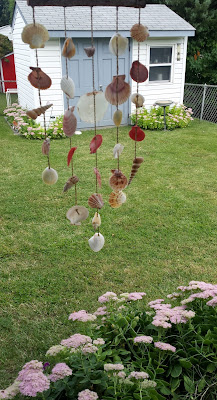 This is a patch of wildflowers at the St. Louis Zoo, recently named the best FREE zoo in the U.S. I just thought they looked pretty. Don't you?

I loved this view through the bushes. Don't know if the water fowl are pelicans, cranes or storks, but I know that orange bird is a flamingo. Did you know the more shrimp they eat, the more pinkish-orange they become? 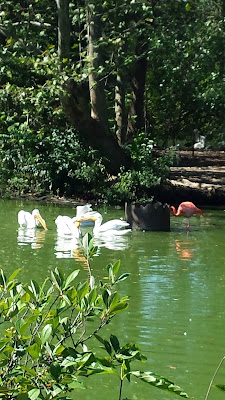 I spied this black Colocasia (kol-oh-KAY-shah) nearby. I always called them elephant ears. I had never seen black ones. There are six species of tuberous perennials from the rain forest and are grown  in tropical Asia as food. "Black Magic" seems an appropriate name. Don't you think? 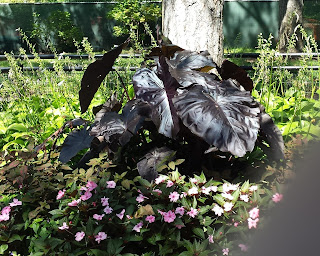 As the days grow shorter and cooler, observe the activity in nature as animals, birds, insects and the land gets ready for autumn and winter's big sleep.


Lima and his mama were picking a peck of peppers from paw-paw's garden. Say that five times. The last good tomato was snatched by a fluffy tailed squirrel. He carried it off in his mouth, wobbling down the fence because that tomato was as big as his head. 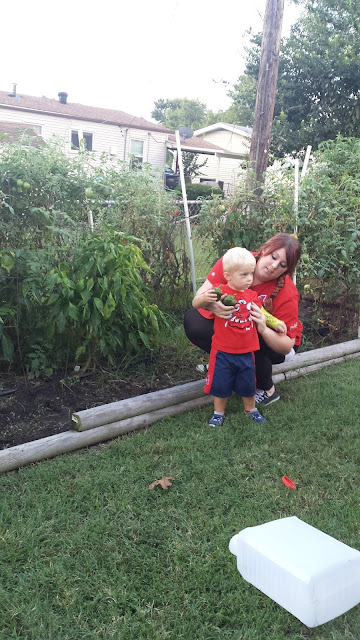 Look closely and you can see this monarch's probiscus as it sucks nectar from the flower. 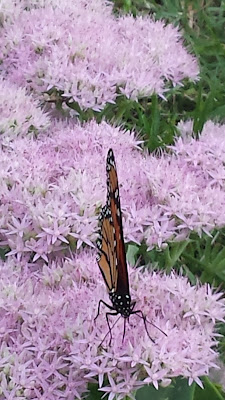 And this is my favorite butterfly. If you haven't guessed, it is a solar powered garden butterfly with LED color changing lights that flash all night long, a gift from my son and his family. 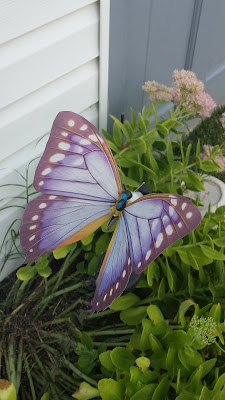 Linda--You get such joy from nature and your backyard. Your post reminds us all to slow down so we can enjoy the sights and smells around us. Thanks.

Such lovely pictures...glad you can be outside enjoying things even with a bite!

This is definitely a time of many changes. Your yard and gardens are quite pretty.

Ooh! Your arm is almost the color of that flower in the picture below it.

Bees 'love' me. I got stung several times by them.It didn't happen in a garden. I'm told I should be careful about colors and perfumes I wear as bees are attracted to certain colours and smells.