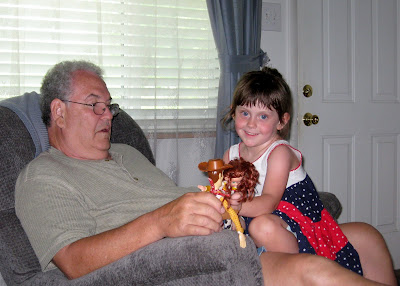 Nicole and Paw-Paw have a growly relationship. He 'arrhs' at her, and she glares back, points her finger and says, "No! Paw-Paw" Then she runs to me. She'll hug him good-bye, but mostly they tease each other.

She was visiting one day. I was on the computer and she was playing in the guest room with her toys. I heard giggling and 'voices' in the living room, and there sat hubby and Nicole engaged in imaginative play, he was Woody, and Nicole was Jessie (from Toy Story). They were acting SO silly, using different voices and playing. Made my heart swell with pride for this man I married.

There's a wall of fame in the office dedicated to Paw-Paw Bill. Each child's photo is framed with a comment or essay about why they love him. Nicole's comment: "He chases me and says, "Bwaaa-haaa-ha-ha." Now she can add, "He plays Woody and Jessie with me."

So, all this time I thought she was afraid of him. I would tell him, "Be NICE to her." She was engaging him.

When our oldest granddaughter (21) was Nicole's age, she would say, "Paw-Paw is my favorite kid." Yep! It's unanimous.
Posted by Linda O'Connell at 4:49 AM

IMO, that's the highest praise that a grandchild can give to a grandparent.

I wanna be just like Paw-Paw when I grow up!

That was wonderful Linda, thanks for sharing. You are blessed.

Yes, Paw-Paws and Poppis have unique relationships with their grandkids. They are different from Nana/Grammy, but the kiddos wouldn't trade them for anything.

Grandfathers and grandchildren need each other.

Nicole is adorable! Woody and Jesse are great pals to play with. So nice Paw-Paw let himself be a kid again to relate to his granddaughter!

So fun! Bill's a sweetie!

Isn't it wonderful when we can play with our grandchildren like this. We are blessed indeed! I'm sure Nicole will remember all this when she gets older, and I'm sure your hubby absolutely adores her!!

That is just too sweet!

This is why God invented grandparents. Sweet, sweet story.