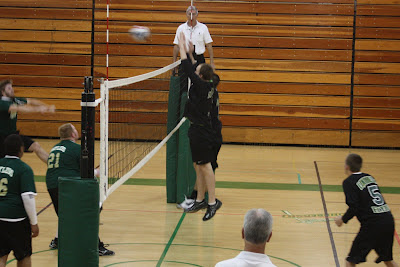 I do not play sports. After this evening, I think spectator sports may be out of the question, too for a while. We attended a grandson's volleyball game at a local high school. We frequently attend his games, but this one made me sick. Sick enough to come home and lie down. Maybe it was the nosebleed bleacher seats ten feet from the ceiling. Or the combination stench of sweaty teenage boys and smelly tennis shoes permeating the room. It could have been the cheap perfume worn by a mom sitting directly in front of us that made my nostrils burn. Perhaps it was the deafening, skull splitting be-bop music (?) reverberating before the game began. Watching young boys on the court with full beards was a bit disturbing. I don't know WHY. My nerves were raw. Testosterone overload in the room: one of the coaches harrumphing loudly and disputing the referee's calls, boys pounding a ball with killer strength then high-fiving one another, a dad demanding loudly that his son ride home in his car instead of on the team bus. People cheering and stomping and clapping. Unable to alternate my feet, I hobbled down the bleachers thump-thump-thumping like a toddler, suffering from a headache, nausea, feeling off balance.

Sensory overload, that is what it was. I experienced briefly what some children have to live with all the time. Sensory overload is a real malady, especially affecting those on the autism spectrum. Hmmm, maybe I'm on that arc.

It was some game. Our team won. Yay!

(Sioux thinks I'm "special", but I think Lisa nailed it. The assault on my senses induced a migrane. My friend suffers from migranes regularly. I can't imagine having to endure these symptoms on a regular basis.)
Posted by Linda O'Connell at 9:13 PM

Poor Linda! You were the victim of "headache heaven," what I call any environment that conspires to set off a migraine. So sorry you're dealing with that. I never thought the ten steps ahead to "sensory overload" but that seems as good an explanation as any. Feel better!

Poor you! Any one of those would have been too much but the combination - yuck! Glad the right team won, though:-)

Sorry about your headache, but congratulations to your grandson's team.

Sorry for anyone who has to endure this kind of pain. I lived with it for 40 years, killers they were, but one advantage to aging has been much fewer of these terrors. Hope today is better...lots of thunder and rain this morning here...maybe coming your way for the weekend.

I only have headaches like that occasionally, but the pain is so intense I have to huddle in a dark room and literally sleep it off.

My grandson has SPD without the autism thank goodness - it is supposed to be it's own diagnosis in the year 2013. He has to work hard at dealing with his senses! sandie

I feel your pain. Felt your pain. About one-tenth of it, maybe. I had a horrendous sinus headache. Two acetaminophen and two ibuprofen took care of it after twelve hours. Thank goodness it was not a migraine.

Oh man, Linda, I think I would have gotten a headache, too. So sorry. Glad the team won, though. Susan

Hope you are feeling better. From what you described I don't think I would have enjoyed myself, either.

No more games for you. Hope you're doing better.