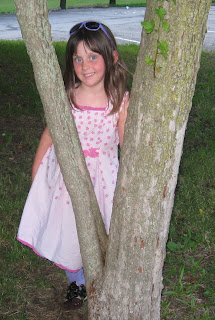 Yes, this cute little "mouth" is sure to spout something meaningful, opinionated or useful to the right individual at the wrong time, as the women before her have. I was thinking about the freedom we truly possess in this country. The freedom of speech reigns high on my list. I come from a family of outspoken females. My mom had five sisters and one brother. Everybody steamrolled each other's conversations when they were all in the same room. It was noisy in that house of Italian-German women. When the words flew, the hands were moving and the hips were positioned so as to prop a hand for effect.

My grandmother, mother, daughter and I have all had to hobble around for a day or two because we inserted one of our feet into our mouths. But in the long run, we got results.

My grandmother had taken my daughter to Woolworth's lunch counter for an ice cream sundae. The waitress served my little girl and asked my grandma, "Anything else?"  Grandma  spoke loudly, "This is my great-grandchild, and she  deserves more whipped cream than that."

My daughter wanted to sink under the table, but witnessed firsthand the results of speaking up. Her sundae had a mountain of whipped cream. Then Gram asked for an extra cherry.

I had taken my mom with me to a public meeting on city funding allocations to keep a program afloat. Many officials spoke. At one point my petite mom who was fidgety and could never sit still for long, walked outside to pace and smoke. When a man came out and stood nearby, she looked over at him and said, "Those people are a bunch of nuts talking nothing. Don't you think? They need to keep my daughter's preschool program open and give the schools the money; do it for the kids."

He nodded and listened a bit more to her, and then, the mayor went back inside to take the podium. Fifteen centers received the much sought after grant that funded the early childhood programs.

My daughter was young, working the video department at Schnucks, one of the biggest locally owned supermarkets in town. A young man, a few years older engaged her in conversation. He asked her about working at the store. My daughter speaks in paragraphs, not sentences. After she finished, he extended his hand and said, "Hi, you are refreshingly honest. My dad is Mr. S."
She was mortified when she came home. Complaints were addressed and changes instituted.

I had been running interference for my boss, answering phones while trying to teach a class, prepare for a faculty meeting, and had just returned with students after a fire drill, which was actually a bomb threat. A "suit" walked in looking for my boss and asked, "How's it going?"

I vented, "It would be going a lot better if the right hand knew what the left hand was doing in administration." The school board president extended his hand and introduced himself. He suggested some changes that very day which made a real difference.

Declare your independence, defend yourself, stand up for what you believe in, address a situation respectfully, and never put any official, or higher-ranked individual on a pedestal.  Happy Fourth of July.
Posted by Linda O'Connell at 8:53 AM

I, too, come from a long line of opinionated women. Which for some reason has a bad connotation. (I think it's fine to have strong opinions!)

Well said! I'm a mouse and don't say what I'm thinking - my daughters do. Somehow the 'speaking out' gene bypassed me!

Yes, we come from a long line of "Speaking Our minds". I would not have it any other way. I remember being at a celebration for Great Grandma & was amazed & entertained by all of the Italian-German relatives speaking loudly & all at once. I remember thinking that they needed to stop & take a breath & wondered how anyone understood what the other was trying to say with hands moving as fast as their mouths! Lol. Now I talk just as fast & use paragraphs instead of sentences to describe my thoughts & feelings & to get my point across ;). Great story, Mom. You out-did yourself again ;)

Sounds like you are from a long line of Movers and Shakers! Happy Fourth today, Linda!

Glad that works out for you. Unfortunately, I have learned not to voice my opinions at work. Blood is thicker than a squeaky wheel. My days of taking a stand and moving on if I did not agree with the status quo ended when I had a family and put down roots.

Another long line of independents here. In this modern world there are plenty of quiet movers and shakers, too, meaning what I say and saying what I mean had always worked well.

Well done to you and the other women in your family. Sometimes it pays to speak up and make your opinions known. Happy 4th to you! :)

Good one, Linda. Loved it.

We are a family of outspoken women, too. However, sometimes, a little more discretion might be in order. ha haha

Hope your day was terrific. Susan

Kudos to you and the women in your family! I have no problem speaking up... it's the look I get from everyone...like I have three heads.. after the fact!! Hope you are enjoying your 4th!

If it's something I'm passionate about, you can bet my two cents will be heard.