Congratulations are in order!

She said, "Yes!"
Bill and I broke quarantine and socially distanced Saturday. Grandson Kyle proposed to Abby; the wedding will be next fall. Meanwhile, they've bought a farm and a darling house about an hour out of town. They are as happy as the cows in the pasture, the pigs in the pen, the ducks in the pond, the galloping horses, and their crazy little dog, Beau, who has finally grown into his legs. 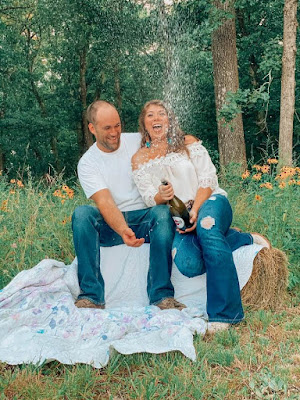 Beau is Kyle's dog through and through. He runs after (and rides on) four wheelers and tractors and in Kyle's truck when he drives to work each day. Kyle has a lawn care business, and Beau is spoiled by the workers and office personnel. 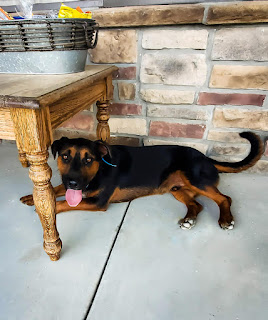 There were darling decorations and cute cookies and so much food. But we did not partake. We ate before we came. Oh wait, we did have a bakery cupcake with so much frosting and filling... Abby had glazed donuts with paper diamonds inserted, which looked like huge wedding rings. Such cute ideas. 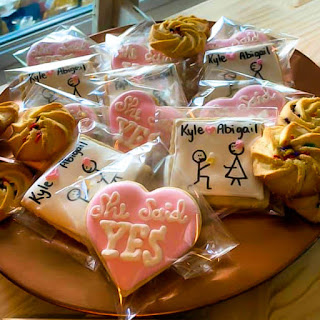 Beau made a  big splash when he jumped in the algae-covered pond, and had to be hosed off. He was even part of the celebration. He had a neckerchief printed with, My Humans are Getting Married! 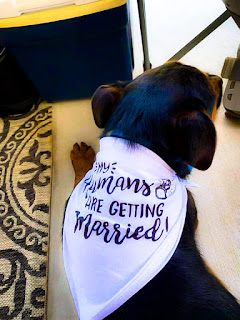 The temperature was in the high 90s and heat index was over 100, but we stayed outside away from the crowd. We sat in lawn chairs on the end of the huge front porch and socially distanced. Kyle rigged up a gigantic fan, which kept us cool and allowed us to watch from afar as they took photos. It is a shame Covid had to shadow their celebration, but we are too old to mingle during a pandemic. Hope this virus is gone by the wedding!
Posted by Linda O'Connell at 10:37 AM 9 comments:

What is that awful smell?

Do you see the tiny ladybug?  When I was a little, I called them potato bugs. They are not bugs, they are beetles, and they are not just ladies. Male and female can eat 5,000 aphids in their lifetime.

I saw on the internet where a dozen of them had wintered at the base of a swirly flourescent light bulb in a living room lamp. This shorted the light and led to a near fire.

Which leads me to the awful odor we smelled when we were driving the car, as if something was burning. Bill took the car in for an oil change and mentioned the odor. The mechanic called and said he found the source of the smell. The car engine had served as a winter retreat for rodents. The airfilter was crammed with seeds, droppings, and acorns, plus there was another nest, which could have led to a fire under the hood.

Now Bill has moth balls on the ground under the car. He has been searching for Grandpa Gus's Mouse Repellent. When he gets on a kick, he delves deeply. He's been researching on the internet for two days.

"I've got to do this the right way. Some users said the mice loved Grandpa' Gus's old spice fragrance and refused to leave. Well we're not having that!"

So I will hear about this for some time.  I told him I think it's that fat chipmunk who snatches the fallen bird seed. So yesterday he ordered a humane trap and plans to relocate the rodent to the farm across the road. I think the chipmunk might get the last laugh. I don't want to tell Bill I saw our chipmunk chasing our neighbor's little rodent.

He may need more traps.

One more fact about lady bugs: they produce a noxious toxin which doesn't hurt humans but makes them distasteful to birds. The brighter the  lady bug, the stronger the toxin. Now you know.

My dear husband bought me a new laptop, and we transferred everything form the desk top. Whew!

That was a chore for a technology-challenged writer. I am blessed with a patient husband.

How are all of you doing? This spike in Covid-19 has me concerned, especially since our state became a hot spot. Life has sure had a lot of twists and turns this year.

I turned my ankle and broke it, but next week I go to the doctor to see if I can give this boot the boot!

I will be back!

Sometimes it's right to be wrong 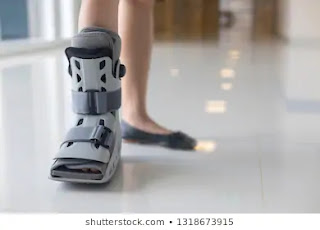 The orthopedist said the X-ray indicates my ankle is healing faster than expected and looks good. He told me to leave the boot off if I get up in the middle of the night and see how I maneuvre without it.

I told him I can't wait. I also explained that they issued me a defective othropedic boot. It had only one soft pad velcroed on that hard piece of plastic. (See the plastic form there with the holes in it?)

He said it required only one pad for comfort on top the ankle. I complained that my leg was sore from the velcro scartching it and I had to put a soft fabric inside to ease my bruising and skin irritation.

He looked at me and asked, "Where have you been wearing that molded peice of plastic?"

"Next to my skin, to stabilize my leg and ankle."

I couldn't see his smile behind his mask, but I know he was smiling by the twinkle in his eye when he said, "Bet that's been uncomfortable. It's to be worn on the outside."

Well now you know why my great improvement. Instead of four more weeks, he says he'll see me in two. What do you know! I did something wrong that turned out right.

Bill says I should get a boot for my other foot so I can stomp all around town.

I'll tell you though, I'm getting spoiled by using the electric ride on shopping carts.

Bringing the sea to me

My ankle pain is easing, and I am physically UP now, but emotionally I am DOWN more than I am up. Yep, life is a roller coaster ride. Try dragging a heavy boot along on the ride, while keeping your balance using a cane, and ripping open heavy duty Velcro strips to encase the boot. It's annoying. But, this too shall pass. I have much for which to be thankful. 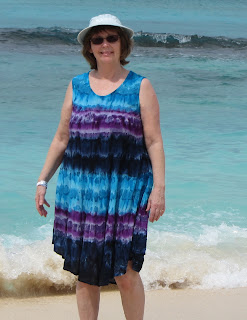 I'm really not that wide.

I've come to the conclusion 2020 will rob us of a beach vacation this year. So I'll relive my happiness by looking at old photos. This one was taken in Mexico, I think.

The sea calls to me in my day dreams AND night dreams. My heart and head are filled with wonderful memories. One of my fondest is a tour we took from our resort to the town banker's property. The tour bus drove through the banker's banana plantation that opened onto wide open land with a mansion that abutted a pristine, calm, turquoise lagoon. It stretched out to the breakers and opened to the sea. We swam and floated in that lagoon one afternoon. I left a little piece of my heart there.

I had a longing to float in the sea. I prefer showers to baths, but I filled the bathtub and soaked until the water cooled. Sometimes you just have to settle for the next best thing, and if 2020 so far is any indication of what's to come...

a monster heat wave is predicted for the Midwest by next weekend bringing temperatures as high as 110 and above.