Do you still have a land line in your home, or are you totally dependent upon cell phones?

We have a land line, but we seldom answer our home phone. We allow the answering machine to pick up the calls. Typically the messages are from the pharmacy. Those times when we do answer the home phone, the calls are ususally someone telling us in a foreign accent they are our grandchild in need of money from a serious accident. We play along, then play GOTCHA!

Other times the calls are from Medicare insisting we accept the FREE support brace for our knees or back, which we do not require.

And the best ones are when Social Security or the IRS insists we are about to be arrested if we do not respond to their bogus attempts to access personal info.

I ANSWERED THE HOME PHONE YESTERDAY...

A male voice, sounded to be in 20s, mumbled something.

I asked, "What did you say?

"Sorry, you have the wrong number."

Rick is going to be sorry.

Many years ago my neighbor Rose received a phone call from her husband Ray at midday.

They made small talk and he asked her to pick up the clothes from the cleaners.

She said she would and she mentioned one of his buddies by name.

They conversed for fifteen minutes before she asked, "Who is this?!"

They were both married to the same named spouses.

THEN they realized they were talking to the right names but the wrong people.

This sassy cat talks more than any cat I've ever known. He mimicks us, he whines, he begs. And he has dozens of cat toys, but look at what he claimed as his prize, a piece of paper. He laid on it, rolled on it, scartched at it and was very content.

Sort of reminds me of my son when he was a little boy. He would receive lots of Christmas presents but preferred playing with the boxes.

When I reached over for it this evening, he nipped my arm. Well keep it then!

The Feelings Flag by Linda O'Connell

I stood in my living room and cringed at the sight of the first plane hitting the first of the Twin Towers. I thought, what an horrific accident. I felt terrible for the people on that plane, and for those in the World Trade Center building. I did not realize that the horror had only just begun.

I turned on my car radio on my way to work and listened intently to the reports. Then, I heard that another plane had made impact.

I arrived at school a few minutes later. No one was quite sure what was going on. Teachers were asking one another, "Did you hear about the plane crashes in NY?"

The gravity of the situation -America was under attack- was like a punch in the gut. We all felt winded, worried, and wounded.

I walked into my classroom, and watched as my students went about their school day, unaware of the attacks, I knew they were okay. My aide was capable, so I left her in charge.

I felt compelled to do something patriotic to relieve the mounting tension and confusion the middle school students were feeling, although I was not in charge of any of them. I cut
twelve- inch by two-inch strips of red, white and blue construction paper into strips, the kinds  kids use to create paper chains. I did not consult the principal or counselor. I acted on impulse. I visited each classroom and intruded on each classroom teacher. I asked each if might have a moment, then I said, "Nobody knows exactly what is going on. We've all heard rumors and news reports. It's a frightening time for all of us."

On that horrible day, when America came under attack, I didn't know if my actions would do any good. It just felt good to do something. My friend Tammy said,

'With that spontaneous action, you gave children a voice when no one knew what to say."

A rare sighting, a rare gift

Our bedroom window looks down upon our backyard bird feeder, bird bath, a variety of birds, two chipmunks, and a trio of young squirrels that excite Sassy Boy, our fat cat. He sits on the chest of drawers and meows at the critters and wags his tail. Yesterday I was petting him and looking out the window. I saw a sight to behold, a pure white hummingbird. I did not take this picture. In fact I didn't have my cell phone with me at 8:28 a.m. But I will always remember the gift I received. Of all the people in the world, I saw a white hummer. They are very rare. 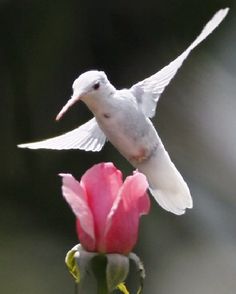 It flew into my neighbor's yellow Canna Lily. Incidentally, these were my late best friend Sheila's favorite flower. It was almost like a gift from beyond. I feel so honored to have been privy to this oddity of nature.

Ah, there are changes coming. I feel it in the air, in the shortening days. Our hummingbird feeder has had three frequent flyers. I remember when we went to Mexico one year. I could not believe how many hummingbirds were at rest on a lush bush. I wasn't aware that they sit still for long periods. Their wings flap so rapidly; I thought they were always in motion.

Just think they have to load up on sugar and nectar to make their imminent long journey south, across the gulf waters, all the way to Mexico. Nature is amazing!

The ruby throated green one, and the brown one, and the mottled one are not afraid of us sitting outside, but they fuss at one another. I am hoping to see that white hummer again. I have my cell phone next to me now when I sit outside and read. I hope I can get a photo.

What have you noticed lately about nature?
Posted by Linda O'Connell at 6:34 PM 6 comments:
Newer Posts Older Posts Home
Subscribe to: Posts (Atom)