Many folks I know are taking trips, going on vacations, but we have opted to stay close to home. We would really like to be taking our annual cruise, but that is impossible with Covid. So we have put it off another year.
We are fortunate to live very close to the Mississippi River. In fact we are on the Illinois/Missouri border.
What a nice surprise to see the Delta Queen River Boat arriving at its new port of call about twenty miles South of our home.

Kimmswick, MO is a little historic river town settled in the 1800s. Many of the buildings have been preserved and converted from residences to restaurants and unique establishments/shops that sell crafts and goods of all kinds. They have an annual apple butter festival that attracts thousands in the fall, and in summer they feature the Strawberry Festival. 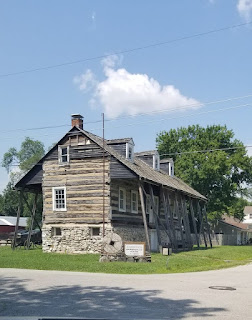 The picture above is  the Barabagallo House, circa 1850. The building below is a winery/port of call for the Delta Queen. When we saw a local news clip about it, we decided to take a drive.

The Blue Owl (not pictured) is a famous restaurant in Kimmswick; it always has a full parking lot and often a waiting line. The large front porch is the best place to eat a large piece of homemade pie. And what a selection! They also have indoor dining.

However, we prefer this quaint little restuarant around the corner. The Dough Depot has delicious and reasonably priced lunches. The former residence takes one back in time. There are four rooms for indoor dining. But Bill and I prefer to sit on the patio to eat our yummy sandwiches served on pretzel bun and delicious, aling with large portion salads. We enjoy watching passersby moseying along, shopping in all the little shops. This has been our Wednesday date all summer. They have scrumptious and reasonably priced homemade baked goods and pastries, which always seem to find their way home with us.

If you have a chance, check out this historic town. Maybe you'll be lucky enough to watch the Delta Queen pull in.
Posted by Linda O'Connell at 9:28 PM 7 comments:

Did you ever kiss a bed or a beak?

Poor little buddy Charlie is STILL two-years-old. He was chasing his brothers and conked his forehead on the bed frame. Laid the area between his eyebrows wide open. It was a deep laceration that required six, PLUS TWO stitches. Additionally they placed Steri Strips over the wound because the nurse observed that Charlie is a non-stop talker and uses his facial muscles to express himself. They were concerned he would bust a stitch just being Charlie. 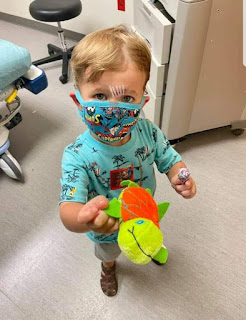 Well, he did! On the way home from the ER his unibrow was numb, but he could sense these little "whiskers" which he pulled off, thus loosening his stitches.

Back to the ER for another bill, two more stitches, and a gauze wrap around his head. He'll be three in a couple weeks. We will be glad when the terrible twos are in the rearview mirror.

I babysat Liam and Alex this week. I took them to the playground and screamed at the top of my lungs when I saw Alex at the top of the slide leaning over. Off to the car with two kids screaming that they didn't want to leave.

The park is wooded and has lots of picnic benches. As we drove down the lane, I saw a man who appeared to be snoozing on a picnic table with this macaw on his chest. I stopped the car, rolled down my window and showed the protesting boys. The art of distraction works at any age. 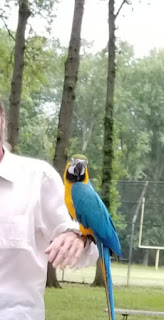 The man asked if the boys wanted to see his bird up close. He walked to the car, and the macaw rode his arm perch. As it neared the open car window, the bird started screeching. "She's three years old and acts like a two-year-old kid!" the man complained.

"Sir, I know exactly what you mean. They live a long time, don't they?"

Well the man looked half a century old himself. "What are you going to do?" I asked.

He laughed as we said goodbye to the bird who couldn't get enough of his handler/owner's smooching.

Let me tell you, a peck on the lips took on new meaning for wide-eyed Liam and Alex.

Posted by Linda O'Connell at 8:56 AM 6 comments:
Labels: #macaw #stitches

Friday I awoke at 10:00 p.m. on the couch as the meterologist excitedly said egg-size hail was pelting everything in the counties just west of us. I ran out into the pouring rain to move my car under the carport. By the time I got back in he said, "Well look at this! See the red dropping on my map? The hail is pushing down and the storm is collapsing just as it arrives in (our area)."

What a relief. The night air was eerily still. I have experienced enough tornadic activity in my life in the midwest to know to be on guard.

My granddaughter lives thrity miles south of us. She texted a video of what my mom used to call an electrical storm with continual lightning illuminating the sky. I listened to the audio as Ashley, her husband, and the kids watched what looked like fireworks. It was an incredible light show off on the horizon. "Ooh! Ahhh! Wow!"

Seven-year-old Laim said, "Imagine if all the lightning all over lit up at the same time." Creative mind!

Almost three-year-old Charlie said, "I scared." Mama told him to come by her. Needed security.

Almost four-year-old Alex said, "When is it going to be DAYtime?!" Wise little guy reasoning that soon it would end. Not soon enough.

I tend to stay away from windows and avoid being outdoors during storms, but my thrill-seeking granddaughter, an amateur photographer enjoys them.

Ten years ago, jagged baseball-size hail pelted the area of Tornado Alley in which we live, resulting in severe damage. It also did major destruction in Joplin, MO. Thus, Missouri writers did a collaborative book drive to resupply the Joplin Library and schools which were destroyed.

This poem was published in 2011 in Storm Country, The Anthology, compiled by Missouri Writers' Guild. Out of 337 submissions mine was one of 153 pieces selected.

My cellphone plinks a text received.
I read the message and gasp. My granddaughter,
the photography major, sends me a just-snapped image.
The swirling wide-mouth monster bearing down,
chomping faster than her boyfriend can drive.

Her message: Safe! Isn't ths a grt shot?
I stomp and storm up the basement stairs,
shake the wrinkles out of my wadded up nerves,
send a silent prayer, "Protect those affected and this crazy kid, too."
I calm down and realize I used to be young and invincible.

Not included in the book: I texted her back. "Grt sht, now gt home u little sht."

Bill came in from outdoors just as I was mopping the kitchen floor. (Always!) He hurried back out the door and said something, but I couldn't understand.
"What?"
"Just come out and see the excitement when you're finished."
His idea of excitement could have been a strange bird at the feeder, a pedestrian walking by, or the neighbor putting on a new roof up the block. I didn't rush.
I finished mopping, and as I walked outside I heard a distraught female voice. "Oh no! Oh me! Oh dear!"

As the U.S. Mail letter carrier drove along a parking pad to deliver mail at the curb, she got stuck on a raised sewer in front of our house. The rear driver side wheel spun and spun, but the vehicle wouldn't budge.
I heard her calling her office/boss. Apparently she left a message on an answering machine. The gist of her message was "Truck stuck. Need help."
I walked out and asked if she'd like a cool drink or a sandwich.
"God bless you offering such kindness. I called the police and maybe they can help me. The truck is stuck."
"Well, do I have any mail? I'm hoping for a check. I'm a writer."
"Sure do."
It wasn't a check!
I said, "Wait right there. (Ha!) I have something for you."
I brought MARIE a copy of the latest @Chicken Soup for the Soul book, Navigating Eldercare and Dementia. She graciously accepted and posed with it so I could promote the book which contains my story, Social Butterfly.
The police officer arrived. He was 12, oops, he looked 12, but he was probably 21. He assisted as best he could. He blocked a traffic lane (we live on a four lane street). Oblivious drivers had to be directed by all three of us to get in the other lane!
I said, to the letter carrier, "I'll show you how to get their attention."
Standing in the street at the curb, I wagged my finger in Marie's face and said, "I sure hope you enjoy the book! My story is about my momma and she was a little stinker."
Finally, drivers slowed down and realized they had to change lanes. Or perhaps they thought we were in an altercation. You know, people tend to jump to conclusions. Marie and I put on a little show and had ourselves a little laugh.
The police officer asked if I had scraps of wood or a concrete block to shove under the tire for traction. I retrieved those. But no luck! Nothing worked. Bill was unable to help. His knee is out and he is on a cane. He sat on the front porch and observed.
A motorist stopped to assist. The gentleman used a jack and succeded in getting the vehicle raised off the sewer.
Sweet Marie was on her way, smiling the brightest smile, waving and expressing gratitude to the stranger, the police officer, and me.
"A little kindness is what the world needs right now," I said as she drove out of sight. "You'll have something to talk about, and I'll have something to write."
Do unto others as you'd have them do unto you. I was raised on this Bible verse and it applies more than ever these days.
Marie, if you are reading this, scroll down and read the post before this one about my great grandbaby. You will really laugh.
Posted by Linda O'Connell at 4:01 PM 5 comments:
Labels: @Chicken Soup for the Soul Navigating Eldercare and Dementia
Newer Posts Older Posts Home
Subscribe to: Posts (Atom)