No, it wasn't the same, but different can be good

Christmas 2020 is in the history books. Such a different holiday for us. Bill and I visited each of our four adult children in their homes instead of everyone gathering in our small house. It really was very
intimate and special this year. 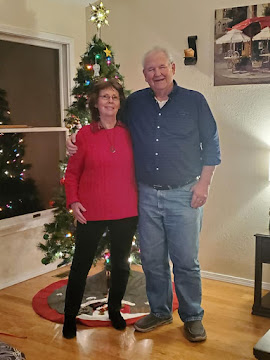 Seeing the great grandsons was as much a delight as it was seeing our own kids and older grandkids who were home from college/work. We spent quality time with each family, missed two oldest grands, but we plan to throw a big bash this summer where we can all be together again, hopefully. Good-bye 2020!

We walked in the front door with a container of fluffy, plush snowballs and set the boys into action. They bombarded paw paw and had the best snowball fight with us. Their laughter is a happy memory.

Alex is quite the tinkerer at age three. He received two sets of tools and has been using them! He likes his goggles and work gloves. He has a car that has removable parts and he loves it! 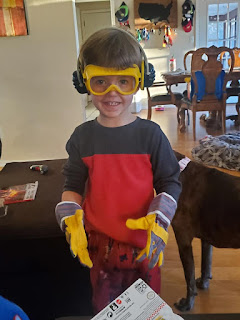 Charlie is the typical active  two year old, vocalizing in full sentences now more than striking out and screaming. But as you can see he got very excited here when he realized what was about to happen... 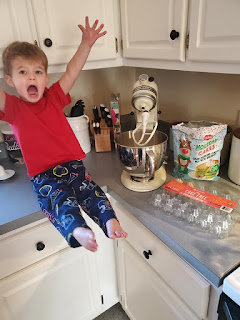 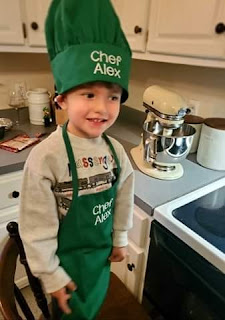 Liam, age six, received SO many video games and battery operated cars and things to play with. However when I showed him what we could do with the empty box in which I carried the gifts, he was mesmerized. He has inherited his mom's artistic ability. He had fun with his remote control car that did flips and zoomed around, but he was as interested in what I was doing. He watched me turn the box upside down and lay out dry erase markers and eraser. He took the things into his room and began to draw on the plasticized cardboard which makes it a dry erase board. Charlie left the chaos of the livingroom to find Liam, and when he did, he sat right beside him and also drew. 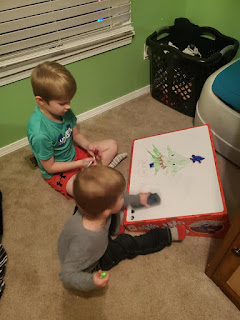 Who says kids need expensive toys?! I used to present workshops for teachers: Learning Games from Trash to Treasure. Notice, the box is on a slant. When the child rests his arm on the box, it provides the stabilization needed to support the wrist/forearm. This discarded box provided much entertainment.

I hope you had a good holiday and are prepared to beat the heck out of 2020 tomorrow night. When the boys' mama Ashley was three, she was spending the night with her great grandma. I called at midnight and told her to get a pot and big spoon and beat the heck out of the old year.

She handed my mom the phone and said, "Nana wants me to beat the heck out of an old deer with a pot and spoon."

We are on a countdown now. Blessings to you and yours.

But what can I DO?

I wake early. Make a cup of green tea and sit and sip my warm beverage by the light of the Christmas tree. I gaze at the meaningful, simple, and homemade ornaments, which are priceless to me. There are framed photos and scribble designs made by our children, grandchildren and great grandsons which span almost half a century. A tiny gauzy angel which belonged to Bill's late mom adorns a branch high on our tree. It is possibly a century old. I revel in the beauty of the lights. I can almost hear my first great grandson at age two shouting excitedly, "Balls, Nana, Balls!" Balls were his favoroite thing then, and when he saw the colors splayed like balls all over the livingroom, his joy became mine. To this day I can feel that joy in my heart.
I look back at Christmases past and wonder if times were better or just seem to have been. I cherish meories of Tracey's and Jason's childhoods. We had such fun sled riding, decorating, making cookies and sitting on Santa's lap and especially visiting family on Christmas Eve. I miss my mom more than ever.
I miss the close contact most of all, the hugging, smooching of little cheeks, and wide-eyed close talking as they share their innermost thoughts and excitement about their presents.
When my daughter was five she unwrapped a little purse. She held it up, pointed to the dangling price tag, and shouted with glee, "Look! Santa shops at Target, too!" Oh the memories.

The message brings hope in times of despair and uncertainty. All is calm... all is bright. If ONLY.

Peace begins with each of us. Random acts of kindness pile up like presents, and each of us gets to distribute our gifts. Let your light shine. Seek peace, calm, serenity and remember that Jesus IS the reason for the season. Merry Christmas and happy holidays to all of you.

I had my annual well visit yesterday. My doctor asked how I was feeling. Tears brimmed when I told her I missed nine months with my great grandsons. She agreed isolation is the worst. And she asked how things are at home.

She laughed out loud. I think she needed that. Her husband has a terminal illness. I told her I pray for her and him. It was good see the gratititude in her expression. These are the random acts of kindness that cost nothing and pay off big.

From five cents to five bucks

Did you ever lose something and instead of feeling upset, it made you really happy? And then you lost a second one and it doubled your happiness?

It's pretty big stuff when you're six years old and you lose your first baby tooth. Liam was ecstatic when his right front tooth fell out at school last week. They sent it home in a little plastic container shaped like a tooth.

The tooth fairy left him five bucks. If I recall, she left me five cents! But you know, inflation and all.

Yesterday the second tooth fell out as he was riding the bus to school. Luckily he was wearing his mask. His mom came home after work, and he stood in front of her with his mouth closed. He kept staring at her.  Ashley said, "What's wrong?" Then he smiled.

All he wants for Christmas is his two front teeth. 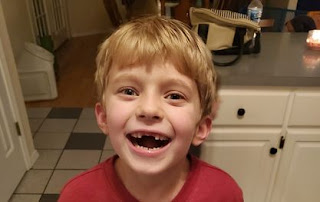 I remember when those teeth came in. He was almost a year old and still toothless. The teething toys didn't do a thing, so I bought a big fat carrot for him to gnaw on. When he tired of it, I dipped the tip in syrup so he would chew some more. After a few days, his first tooth erupted and then the second.

We were so excited when those teeth came in, and now he's excited that they are coming out.

Times they are a changing. I will be so happy when I can squeeze him and his brothers again.

Sunday night at 8:00 p.m. we saw their mama's car pull into our driveway. Bill and I ran outside in our robes to the delighed squeals and shouts of "Nana! PawPaw!" and Charlie screamimg, "Hi Nanny!" He refuses ot call me Nana anymore. He is distinguishing "nanas are yellow and yummy" I am Nanny now for him.

The joy those little faces and voices brought us was immense. There parents were taking them to view holiday lights and dropped by to surprise us. I ran back inside to get cookies for them. They were in their jammies, each with his own blanket and bag of snacks. We so wanted to hug each one, but made do with rubbing their hair and telling them how much we loved them.

As they waved good-bye, we turned to go inside, then I turned around and darted after the car in my robe. I raced their car up the driveway and out to the street, to the sounds of their hysterical laughter.
It truly is the little things in life that matter.

When this change of (my) life occurs, I "fall back" unwillingly, unproductive, and out of sorts. But after a while I get used to the cat meowing in my face at 4:30 instead of 5:30. I accept Daylight Savings Time.

What actually IS: I fall into deep restorative sleep on the couch from 7 or 8-10:00 p.m. I watch the late NEWS and then have insomnia until 2:00 a.m. This is time I could be putting to good use, as in doing chores or writing, but I'd rather stay cozy under covers, complain,  and wish for what was.

I procrastinate big time. I am so bad I don't even get on the computer. I access my blog, emails and Facebook through my cell phone. Unfortunately my phone does not allow me to respond. I tell myself I'll to do it later.

Later happens about 6:00 p.m. when it's pitch dark and I'm quite certain it is almost late NEWS time. But it isn't!

I "ugh" and "oh no" for an entire month. My submissions calendar has so much white space you'd swear it snowed on my desk. Yes, I use a real wall calendar, ready at a glace.

By Decemeber I'm in my new groove. Wish me luck. I've turned the page. So far I am on a roll and picking up speed. I have submitted three pieces and am feeling the urge to write. I think I'll give in to my whim.