Things that make my heart sing

I do wish I could have been outside when it happened, but I'm sure I was sleeping when the red bud tree's tiny blossoms erupted. Can't wait to see the tree in full bloom.
It is the little things in life that make me happy. We have one Amarillys plant in our back yard that someone planted before we moved in 25 years ago. It has the best fragrance.
The grass cutters just pulled up and started the mowers, and I darted for by little flower. I brought it inside and am delighted with the heavenly fragrance permeating the kitchen. Lilac bushes are my very favorite. Spring has sprung, but temps are cool.
I am happy with all the new growth. Our lawn greened up overnight, too. Nature is wonderful.

I pulled this photo off Facebook posted by, and perhaps taken by Kailish Chandra Sahoo. It speaks to me and proves that love crosses all boundaries, species, genders, and love heals. This swan was "thanking" the veterinarian. Does it touch your heart, too? 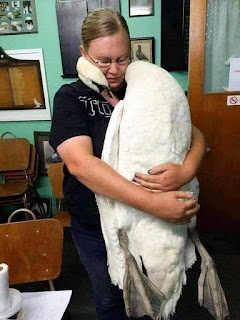 Humor is subjective. I've been in comedy clubs where most people are laughing loudly, and others are straight-faced not even cracking a smile. I assure you, there are stories in this collection that will resonate and stay with you a long while. I have read the book cover to cover and still laugh out loud when I share two of the relatable, guaranteed-to-make-you-laugh stories with others. 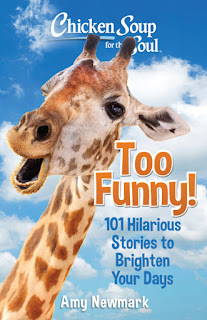 You would normally think of Chicken Soup for the Soul as the place you turn to for advice—on positive thinking, forgiveness, gratitude, self-esteem, raising kids, caring for the elderly, and other challenges. But this new collection is just plain fun, a welcome diversion in 2022. Chicken Soup for the Soul has gathered some great storytellers to document the mishaps and misadventures of everyday life. Prepare for lots of good, clean (and not so clean) fun. The chapter titles provide a preview of all the joy inside: “That Was Embarrassing,” “I Can’t Believe I Did That,” “Mistaken Identity,” “These Modern Times,” “Not What I Meant,” “Domestic Disasters,” “Happily Ever Laughter,” “Laughing at Ourselves,” “I Kid You Not,” and “Family Fun?”

No one is safe in this collection—from spouses and siblings to parents and children to friends and colleagues. And of course, the funniest tales are the ones people tell on themselves. No one is holding anything back, with tales of snafus at home, embarrassing moments, goofy pets, holiday hiccups, eccentric families, and every other kind of story that makes you stop, think, and then burst out laughing.

Chicken Soup for the Soul’s editor-in-chief and publisher Amy Newmark says, “I kept bursting out laughing as I selected these 101 stories from the thousands of submissions we received. Even when I was editing them, and had already read them a couple of times, I laughed all over again.” She continues, “If laughter is the best medicine, then this book is your prescription. Turn off the news and spend a few days not following current events. Instead, return to the basics—humanity’s ability to laugh at itself.”

For locals interested in buying a copy, I have a handful to sell ($10.00 each) and can deliver if you are not too far away. The library is not ready for in person book signings yet.

Care to share a funny that happened to you? Aw, come on, tell me.

Did you ever lay awake anticipating big plans, and then unexpectedly the plans fall through? It happens to all of us. If you are resilient you can find a way to survive and thrive. It is how we handle disappointment that really matters.

Sure, I was looking forward to taking our two youngest "leprechauns" to the St. Patrick's Day Parade in Dogtown, a local neighborhood. The weather was perfect, and I had planned to leave really early with three-year-old Charlie and four-year-old Alex.

Then they arrived... with snotty noses and allergies acting up. It would be no fun with sneezy and wheezy, so instead of seeing the giant blow up leprechauns and Irish displays and Hibernian parade, we decided to stay home and play outdoors. 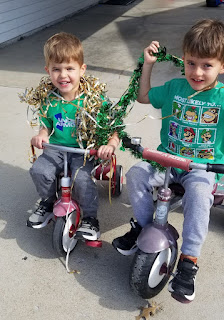 I painted tiny green footprints on the driveway, which the boys followed onto the porch, patio, and right to their trikes, where they discovered mini choclate eggs wrapped in gold in the 'trunks" of their trikes. That silly leprechaun even played with their basketball hoop. The boys scampered all around laughing gleefully and tracking the sneaky little leprechaun, discovering his gold, green shiny shamrocks, and new pennies strewn all about.

They had fun and showed their mama all their treasures and their rainbow artwork. On the way home she texted me, "Charlie swallowed a penny. Do I take him to the ER?"

I told her if he wasn't choking or complaining it would pass through his digestive track and to stuff him with oatmeal to bulk the colon and get it to pass. (I should have specified COOKED oatmeal.) She called Children's Hospital and they confirmed what old great grandma said. So the kid is back in diapers for a couple days, as I'm sure the prunes will do the trick with the cooked oatmeal.

This morning Ashley posted a video clip of Charlie discovering her eye makeup pallete, painting his face. He gave himself a unibrow, black cheeks, purple nose. This little leprechaun is an active one. Thank goodness Alex is more low key. And poor Liam at 7 is the guardian, such a terrific big brother.

Liam spent last Thursday overnight with us, and I played Leprechaun tricks on him. Put a dab of green food coloring on my finger and gave him a pan of water, then stirred it. Shocked, he asked how I did that!? It was fun see him having hands on fun instead of having screen time.

Charlie chatters in full sentences from morning until night. When he got caught with the makeup, he said, "Hey Mom, Mom. See, I'm using the little brush. The big one is for grown ups, right Mommy?"

Someone suggested he get his own You Tube Channel.

I am so happy about daylight savings time. I NEED more sunshine, longer days, warmer weather.
I have a perpetual smile because the weather is beautiful and will be in the 60s and 70s all week. The windows are open;  I love the smell of a fresh breeze wafting through the house.
Spring rejuvenates me. The daffodils are bobbing in the backyard. Bird song wakes me now. Hubby and I sat on the patio and played a few games of Rummy Cube. I've read a book, eaten lunch outdoors. Talked to neighbors. I hope spring is around the corner for you, too. 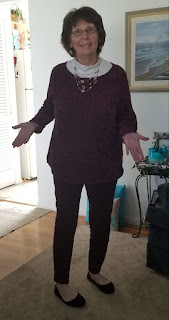 Who's an author? You're an author.

I was at the Goodwill Store looking for children's books for Alex and Charlie. I found a book about Liam the leprecaun. Perfect, because all three boys will be spending the night, and I can imagine the gasps when Liam hears and sees his name. His little brothers will anticipate hearing their names, too. So I will fake it and make them believe they are characters in this book, too.

While looking through the book shelves, a woman looked at me and said, "It's a crime, they want $2.00 for a book that cost fifty cents a month ago. They are taking advantage of the people. I used to buy all my books here for my classroom."

Turns out Miss Barb and I were kindred spirits. We'd both taught preschool for forty years and considered it our dream jobs. Now, our grandchildren and great grandchildren are benefitting from our expertise and our love for young children.

My love of writing and reading comes from my father, who was illiterate. My late dad who would have been 105 this week, had a third grade education. He could not read me story books, but he could tell fabulous stories with sound effects and interesting details.

I'm convinced my 20 year old grandson received the "gift" of writing, too. He called to ask my opinion on an essay he had to do for his college class. His writing floored me. I mentioned plagiarism, and told him professors could detect it immediately. He said he hadn't copied anything. These were his thoughts and opinions in his own words. I am so impressed. He received an "A" on his paper.

It is never too soon to start children off "reading" and writing, or at least making the association between symbols, pictures, letters, and words.

I do rebus booklets with the little guys weekly. That is, printing the word below the picture, using finger reading to "read" the short sentence.

Ant 8 an apple.
Bee bit a banana.
Cat ate a cupcake. (I glued real cupckae sprinkles on it. They were amazed at the touch and smell cupcake.
This week they will read: Dog ate a donut.

You can bet the donuts will be smelly, too.  They are so proud of themselves for "reading".

I show them interesting pictures and have them tell me 4-5 related sentences and stay on topic. They are becoming great authors too.

Can't you HEAR this picture? The thrill of victory is apparent on Charlie's face. His whole body is screaming, I WON!

When my late dad was a little boy he played marbles. Now his great-great grandsons are playing with marbles but in a different game. Not as much strategey, but as much excitement, for sure.

I found a brand new Hungry Hungry Hippos game at Goodwill for $2.00. We certainly have gotten two dollars worth of enjoyment out of it. This is an active and very noisy game, but what better way for two little tigers to release all their pent up energy?

When their mom came to pick them up, I told her she could take the game home. She smiled deviously and said, "No thanks. You keep it here at YOUR house. They nearly killed each other over the Light Bright."

I remember those days when all I craved was peace and quiet. When my children were as young as these two, I used to sit on my front porch early in the morning and read the newspaper. I turned those pages so quietly, so as  not to wake the kids. But you know what? Those days passed way too quickly.

Now I am appreciating every moment of our noisy boys' activities and competitions. Heck, even Papa Bill got  in on the action.

I loved my kids, and I appreciated my grandkids, but with my three great-grandsons, I have so much more understanding and patience. I keep photo journals for them because I can barely remember time spent with my grandma when I was their ages. I hope when they are grown and look at their albums, they feel the love I have for them.

How sweet it is!

What the world needs now is love sweet love...

So, if you can do one nice thing for someone, do it NOW. Share compassion, spread compliments, smile even if your heart is breaking.

My great-grandson's give me laugh lines. Charlie (3) a red headed, verbose, chatterbox walked into his Nana's house (my daughter babysits two days a week) and said, "OH, Nana. Wow! You are so bootiful today." She had her hair colored and styled. She told him he was sweet.