A real live episode of COPS

I was writing when my honey went into the backyard. He flung the door open and said, "Come out here, you've got to see this!"
I figured he had another ripe Big Boy tomato he wanted to brag about, or perhaps he'd spotted the two baby bunnies that I had seen earlier.


So I didn't rush to the door. When he shouted again with urgency, I bolted out the door and saw almost two dozen police cars with flashing red lights lining our street, along with state police, the feds, bomb squad, detectives, and overhead helicopter news crews. 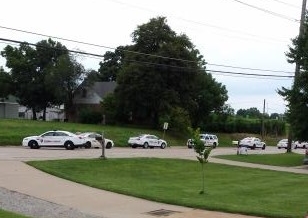 I stepped out on the front porch (in the open), and saw Bill shielding himself behind my car in the driveway watching a female police officer pointing her weapon across the street into a field.


We live on a four lane street. There are ten houses on our side of the street, and directly across is a once thriving truck farm, which is now pretty much an overgrown five acre plot with a farm house. Two elderly brothers, 85 & 90 years old still live there. They sit outside occasionally.
Along their property lies a chain link fence line and the interstate highway. Down on the corner there is a bank.

It's old news now; it happened last week. If you haven't figured it out, some 59 year old genius decided to rob the bank. He told the teller he had a bomb, dropped the package in the bank, and got away with $2,000. His getaway driver got away without him. As the robber ran toward the fence line to the highway, police swarmed in full force for the silent alarm, and the accomplice left his partner standing in a field.


Police officers had their automatic rifles trained across the street. Officers ran through brush and past out buildings and sheds with weapons. Then a police K9 unit arrived. The dog tracked the guy but lost his scent, then picked it up again down by the barn. 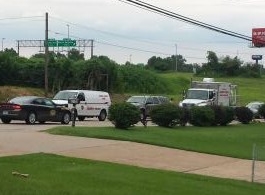 All NOT HEAVEN broke loose when the dog cornered the guy and he tried to fight off the dog. You know who won. The dog ripped the robber's neck and bit up his head. The guy was a bloody mess, laying on the ground right in front of us, surrounded by police officers who bandaged his exposed larynx and throat before the ambulance arrived.


After they hauled him away, the bomb squad suited up and scoured the field, came out with a package, probably the bank bag. What a fright! We live in a nice and quiet residential area, very low crime. This was unbelievable directly across the street.
My concern was for the farmers who had arrived home minutes before it all went down. The police questioned them and every neighbor. They were safe inside, and nobody could provide information.


The bank robber was hospitalized, and survived. What makes a 59 year old man do such a thing?
Folks aren't safe anywhere, anymore. Be cautious, be aware.

Wow, how frightening that would be. Glad to hear you and your neighbors are all OK. You never know what might happen these days.

I totally agree with the concluding sentence of your post.

I miss the feeling of a small town even though we still in a fairly small town. We looked out for each other in the old days. Yes, that could be an intrusion too but I don't like not knowing who or what is going on close to me. World feels on tilt these days!

I used to sit smugly in my dark basement lair, content with the fact that I live in a rural haven of serenity. Then they found that headless body in a septic tank less than a half mile up my gravel road. I had even watched the FBI black SUVs and the backhoe to dig up the septic tank drive by that morning. Silly me. I thought maybe some new neighbors were digging a basement, not that a multi-state meth ring had disposed of a tattooist who crossed them.

Geez. That'd be enough to make one a bit more cautious than usual. Living in the metro Atlanta area as we do I often wonder how many things happen right under our noses about which we are blissfully unaware. I would bet if I knew the answer to that I'd be afraid to leave my house in the morning. Do you think the world is crazier than it used to be?

First of all, are you paying Val a residual for using her phrase "no heaven"? ;)

Secondly, how untypical of your tranquil neighborhood. I'm so glad no one innocent was hurt.

Third, what kind of idiot thinks thay have a chance against a dog?

Finally, how typical... a man bragging about his "big boy."

A little more excitement than you're used to?
Let's hope it doesn't become a regular thing.