I am still touched by him.

Stephen walked into my classroom at age three, shorter than a yardstick, weighing less than a sack of potatoes, sprouting a mop of hair the color of a new penny, wearing an ear to ear grin. His green eyes conveyed mischief. He had an elfin charm, and he was quite the character, despite his congenital birth defect. Born without a pulmonary artery, he tired easily and struggled to keep up with his peers. I had to make many accommodations for him. I became very attached to this little boy. 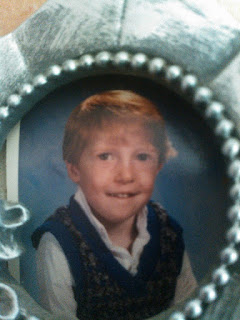 By age five, his weakened immune system made him susceptible to childhood illnesses and resulted in frequent hospitalizations. When he was too tired to be tutored, I allowed him to teach me – about his favorite television program, The Teenage Mutant Ninja Turtles. He was an expert on every aspect of the show, especially his favorite, Michael Angelo, who wore a mask that was the same color as Stephen’s hair.


After one of his hospitalizations, when Stephen was strong enough to return to my classroom, I surprised him. I purchased an oversized stuffed Michael Angelo with classroom funds.  Stephen's laughter and squeals made my heart swell with love. Although he could barely see over the top of it or wrap his arms around it, he dragged his best buddy everywhere and told his classmates every last detail about his favorite Ninja Turtles episodes.
Stephen  eventually went on to big school and I continued my close relationship with him and his family. When he underwent reconstructive heart surgery, his recovery was slow. Some days were fairly good, but others were unimaginably painful and depressing for him. He lay exhausted, his face as bloated as the helium balloons swaying above his bed.

“I miss the good old days,” he’d say, “you know, before my face got so fat (from meds) and I had this trache.” He pointed to the breathing apparatus in his throat. During thunderstorms he’d matter-of-factly announce, “That’s my friend Katie up there bouncing on the clouds again.”

When frustration, pain and aggravation consumed him, he’d point with what he called his “E.T. finger”, his index finger with the red light indicator clip, and he’d yell at his doctors and nurses, “That’s it! You’re fired!”


His mom sat by his bed at night and gazed out the window.  Stephen tried his best to comfort her.

Ann smiled, but she wasn’t able to distinguish the imaginary features Stephen and others claimed to see when they looked at the full moon.


As he suffered one set back after another, Stephen declared one day, “I just want to go home to my real dad.” His mother assured him that his father would be arriving soon. He looked at his mom and clarified, “Duh! My real dad, GOD!”


On a balmy June day, at age nine and a half, Stephen finally went home to his real dad. Racked with unbearable grief, rage, and unanswerable questions, his mother, unable to sleep that night, walked outside into the yard and gazed heavenward. For the very first time in her life, Ann swears she saw it…the man in the moon smiling right at her.


Stephen would be 30 years old this week. As I was typing this, I swear I felt a nudge on my back. Looked around, no cat, no hubby, nobody I could see. But I think I know who it was.

I think you should rewrite this so you can submit it to CS...

What a moving story.

Beautiful story, Linda. It sounds like Stephen touched a lot of hearts during his short stay on earth.

Left me in tears and I don't cry easily...wonderful story and reminded me of a friend whose writing does the same thing to me.

Such a heartbreaking story.

Well written , touching story!
There's nothing more heart-breaking than a child in pain and anguish. Parents, colleges, teachers, surrounding him, are often completely helpless in face of his suffering, and that's extremely sad.

Ohhhhhh, that was so sad but uplifting, too. What a little sweetie pie, he was. I'm sure YOU made a huge difference in his short life, too, Linda. You are a peach. Susan