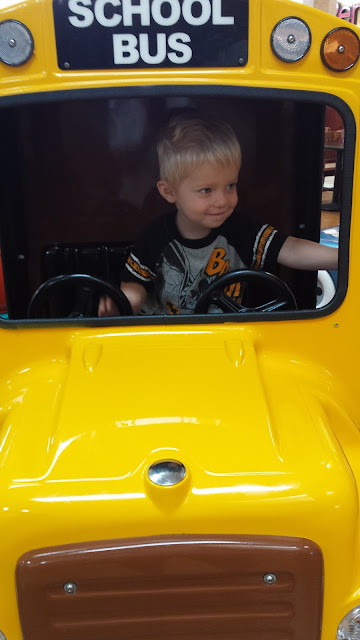 We are just a few weeks away from starting school. Children will be boarding school buses across the nation. I guarantee you, your students won't find a cuter bus driver than Liam.

I used to roll play with Liam's mom when she was little. We would act out what to do and say if someone bullied her (or someone else.)

Roll playing puts children in charge, empowers them and gives them practice. We always acted out several scenarios and solutions. Sometimes she was the "criminal" she called it, and sometimes she was the problem solver. I wish schools taught this in depth. It is up to parents, so pass this info on to someone you know.

When Ashley came home from kindergarten with head lice in her thick, long, blonde hair, I removed the nits for hours outdoors as she begged me to tell her another "criminal story." I covered just about every offense imaginable. She was as precious, smart, and precocious as her little boy.

Here's another of my favorite boys! 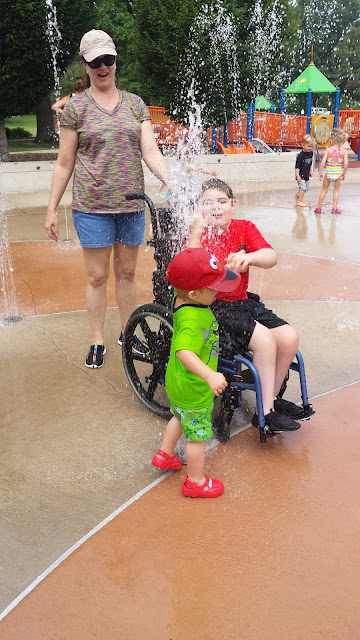 On one of the hottest days of summer, almost 100 degrees, we met Cole, one of my favorite former students and his mama Stacey at the all-abilities park. The boys are both very capable and enjoyed playing together.

I pray for the health, happiness and safety of all children as they grow up in this
criminal-infested, crazy world. When Cole was in my class he and I sang You Are My Sunshine...he filled in the blanks. He sang it at our Spring Sing in front of parents and families.

I sang in his ear at the park when I greeted him, and I could see a memory-spark from years gone by. he really is a ray of sunshine.

My little buddy is a fearless water baby. 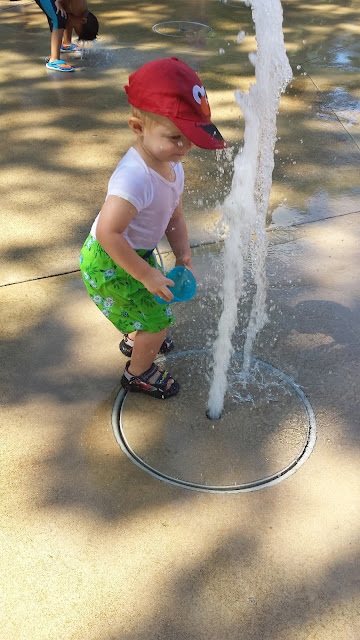 Little wise guy is getting too smart for his britches. He loves the sprinkler park, and he has figured out how to fill his cup. It is fun to watch him figure stuff out.

He also loves his noodles, not mac and cheese, but dry pasta noodles. He enjoys the sensory activity of scooping and pouring the noodles. One day last week he was tossing them all over. I said, "Look, Nana's barefoot. When you get the noodles on the floor, it might hurt my toes and feet. Keep them on the sheet and off the carpet." 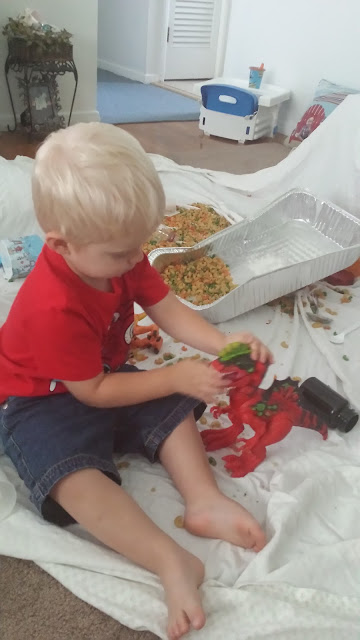 My little darling looked at me, stopped pouring and gazed at my feet. He said, "Wear your shoes!"
I know he said that because if he had said, "Where your shoes?" his little voice would have gone up at the end of that sentence. He's a cutie, alright, a real problem solver.

I put him down for his nap after lunch and as I was cleaning the kitchen, I heard the pitter-patter of his little feet. He greeted me with a grin and said liltingly, "Good Moaning, Nana."

I said, "It is not MORNING and you have to take a nap." I chased him all the way down the hallway and into bed with much giggling.

My wish for all of you~ at least half as much happiness as Liam brings to me.
Posted by Linda O'Connell at 10:00 AM

Linda--You are lucky to have Liam--still a baby in so many ways.

Riley is going into 5th grade and although she is the light of my life, she's too big to sit in my lap and cuddle and carry around.

Have a mimosa on the first day of school, as you watch the school buses go down your street. Retirement must be a blast!

What fun! Liam will remember days like that for many years.

Love the pictures. They made me feel refreshed. Except the noodle shot. It just made my feet hurt.

Liam sounds like a smart fellow. Clever, cute, and always thinking. Great pictures! I enjoyed hearing your stories about him.

I hope Liam is given the chance to look into your post. His pictures will make him happy and proud that he's his Grandma's hero.

I live vicariously through you, you know that, right? I've got years to go before I'm a grandma...my son and his wife are waiting until she finishes her masters for nurse practitioner (2 years...boo), my oldest daughter isn't married yet (October), and my youngest is only 22 and still in school, so she better not!! But I love your Liam stories. And the role play is such a great idea! You have so many, Linda. You should catalog it all and write a book for other grandmas. I'd buy it in a heartbeat.