The ups and downs of life

It has been a crazy week. Sorry I didn't get around to posting. Liam saw the Olympic athletes  on TV performing on the trampoline, and that's all he talked about.
"Want jump high, Nana. Real high. Up high." He pointed to the ceiling, and begged me to lift him "so high." An impossible task. Instead I took him to Monkey Joe's, filled with bounce houses, a section for kids under three. He was unsure at first, but once he started jumping higher and higher, he thought he was almost at the ceiling.

As a writer, there have been times when I want to soar to the top, too. Achieving a goal makes me feel elated. How about you? It's hard to bottom out, though. My latest Chicken Soup story was a last minute cut from the Angels and Miracles book. Yes I am disappointed, but I'm not going to mope. I sent it elsewhere. 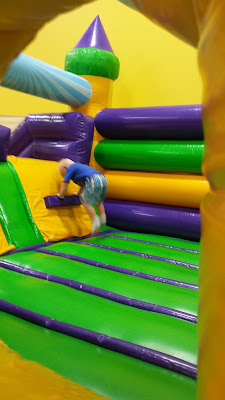 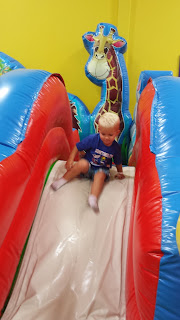 Friday when Liam came to visit, I got out the paints, and my little Picasso painted for half an hour. He mixed colors, and by the time he was finished, he had painted his palm and was making hand prints all over his paper.

Years ago when my children were small, I would have freaked out. Now, I realize he was enjoying a sensory experience, learning about wet, slippery, oozy paint and naming all the colors. 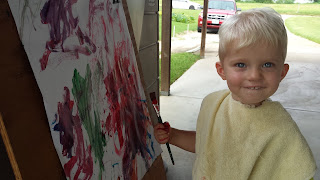 One evening last week before bedtime, he took a tumble. He decided to ride his Lightning McQueen ride-on car down five carpeted steps and caught himself on the landing. He buckled his wrist when he crash landed, and had to go to the ER. When the doctor knocked on the exam room door, Liam shouted, "Come in." Everybody thought he was a little cutie. They allowed him to select the cast color, and he named the entire selection of colors. He stated his age and name, and made friends with everybody. He is such a joy. His mama, my first grandchild, was  exactly the same way. People would stop me and ask if she were in acting. When I said, no, they said she should be. Personality plus, those two.

The nurse gave him a ring pop (which he loved) while she wrapped the cast on his arm. He was happily distracted. Upon completion, she said, "Okay, there you go Liam. It's all yours." He looked curiously at his cast and said, "Oh?" Then he realized what she meant, and he said, "OH!" NOOOO! But as we walked through the hospital he stopped and showed everyone his cast. He has asked twice to take it off, but otherwise he has adapted well and is still his happy little self.

We creative types must adapt, too. If one style doesn't work, try another.  If your story isn't working as prose, try writing it as a poem. 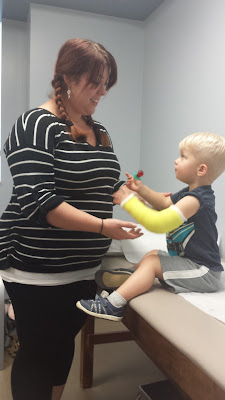 Before Liam's great fall, the Bosnian man next door waved to him when he  saw him under the tree playing in a pan of dry pasta. Liam shouted, "Hi!" and ran to him. He was more than thrilled when the man reached up and picked an apple from his apple tree and gave it to him.

Liam is very polite. He says, "God bless you," if he hears someone sneeze, then he says, "Thank you! You're welcome." He told the man thanks and off he ran to us to brag about his apple. Be grateful for the smallest things. Appreciate what you do have, instead of complaining about what you don't have. 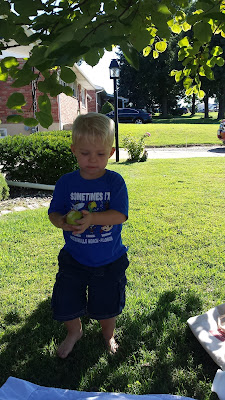 Have a great week. If you know of anyone interested in taking an on line writing course, www.coffeehouseforwriters is forming new classes. Please pass on the information.
Posted by Linda O'Connell at 5:58 PM

Kids are usually not frightened of anything. Cute and smart little kid.

Poor little mite. I saw your FB post about this. So sorry the little guy was hurt, but I know from when my son was growing up that little boys definitely learn what the inside of an ER looks like.

This post might easily have been titled, "Lessons from Liam." You could write a book. And that sweet face and smile would sell a ton of them. :)

Linda--I am sure that won't be his last trip... Boys have a way of getting themselves hurt on a regular basis.

Hi Linda!!! I am trying to come back!!! Liam is such a beautiful child! Love his eyes! Great post and I got the book in the mail today! More later.

I am sorry to hear your story was cut, but good for you for sending it on elsewhere. Liam looks like he is having so much fun in the bounce house and with his painting. I bet visiting with you is one of his most favorite things to do. Everyone should be so lucky as to have such a wonderful grandma.

Liam is a living doll, Linda. Sorry he took that major tumble but there will probably be more before he goes to college. You must be over-the-moon over him. Thanks for all your visits to my blog, Linda. Susan

Liam is so photogenic, and sounds like a perfect young gentleman. He is so cute he could be a child model.