Whiling away the week

Saturday evening we joined my daughter Tracey and her husband Dave, and their neighbors for a concert at a park. That 80s Band rocked those old songs, and yes, we were all compelled to get up and get our groove on. We left before the concert ended at 11:00 p.m. intending to beat the crowd.

The van in front of us got stuck in the mud, and it was like watching Laurel and Hardy trying to hook up a tow rope and get it out of the muck.

Liam is on a dinosaur kick. I took him to the Science Center on Monday, a free attraction in our town. This animated dinosaur scared his mama half to death when she was his age. I prepared him for it, gave him a  frame of reference. I told him the dinosaur was not real, and it was so tall its head was up at the top of an apple tree and it could eat an apple with one bite.

He loved it! He ran up to the Stegosaurus and said, "Aww, rhinoceros, you night-night?" His vocabulary is amazing for a 2 yr 2 month old wild child. He now calls it stegosaurus. 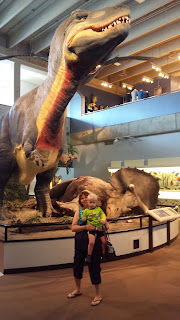 Friday was a rainy day. Liam asked, "Go see the big dinosaur, Nana?" How could I say no?

He looks like a sad little waif here, but actually he was jabbering away looking up at the huge creature, preparing his own dinosaur. "Big dinosaur not hurt you. It's not real, Big toy. Robot toy, dinosaur. Don't be afraid. It's okay." 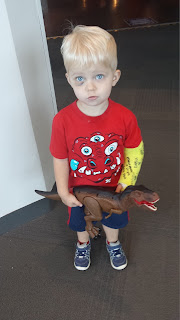 He kept saying, "Wow! Big teef!" So, a docent came over and allowed him to touch a real dinosaur tooth fossil. He saw a poster of a dinosaur and showed me the big teeth. 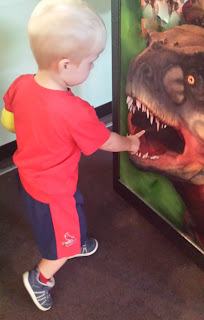 There was a motion activated movie viewing wall. As Liam approached, a woman and man scientist appeared on screen and said, "Hey, come over here and we'll tell you more about dinosaurs." Liam ran over and stopped abruptly, touched their images, turned around and looked at me, confused. He shrugged his shoulders and went over to the dinosaur dig filled with bits of  shredded tire material, shovels and paint brushes to unearth the fossils.

He grabbed a paint brush and ran over to the big T Rex, raised the brush in the air and shouted, "Big dinsoaur, I paint your big teef?"  Paint brushes have one use according to him: painting. One day he'll learn all about paleontology.

There is a glass enclosed pedestrian bridge over the interstate which connects the Planetarium and Science Center. Kids can use real radar guns to see how fast the cars are speeding by. There are also plexiglass viewing windows on the floor. Liam identified each shape and ran to look down on the cars zooming by. "I see the triangle window. Wow! Nana, look at the cars." 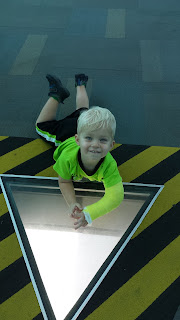 Back home, his dinosaurs watched as he did some busy work. I placed him in his booster seat to contain this overactive little guy. I made holes in one of his cardboard building blocks and gave him a handful of golf tees. He thought he was just playing, but actually when he pokes one tee in each hole, he is developing hand eye coordination and small finger muscles which he will use one day for printing...and writing cursive, because I will insist upon that.  No keyboard is going to replace his penmanship. Leave it to Nana. 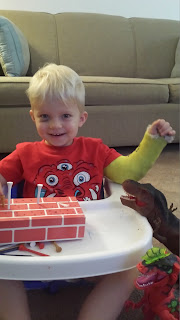 Linda--I'm jealous. I only have one granddaughter. I can't wait until I get at lest one more grandkid..

Liam is such a cutie and so smart. His intelligence is going to bite his parents in the butt. They're going to have to scramble to keep up with him.

Sounds like a great rainy day for both of you!!! What good times you get to share with Liam.

I am jealous, too! I missed so much time with mine being so far away. I will have to wait for a batch of great grands to play with. Hopefully, by then I will be living in the RV and able to plan my life around them!!

Going to see the dinosaurs with Liam sounds like so much fun. He is so cute and obviously very smart as well. I bet he is a handful to keep up with. :)

Liam is cuter than a speckled pup! And you KNOW how much I love speckled pups. He'll be enrolled in college by the time he's ten. That little guy is smart! Having a Nana like you doesn't hurt...

It's a wonderful thing to relax and enjoy time with family. Little Liam is adorable!

No doubt Liam made fabulous memories with Grammie and the dinos,Linda. And thank goodness you plan to teach him how to write in cursive! Susan

Such delight he brings you, and you in turn share it with us. He's a bright light, that one. And you made me nostalgic for when my son was that age. Miss having a little one around.