Wants and needs...what's your opinion?

The leaves are beginning to fade. IF the weather ever cools, the trees will be bare, and I will curl into myself and cocoon. The temperature here has been in the 70s and will continue to be mild through Halloween. I am not complaining about that. I love fall. Life has been difficult the past few days, but the changing seasons are like life...wait a while and more changes will occur. 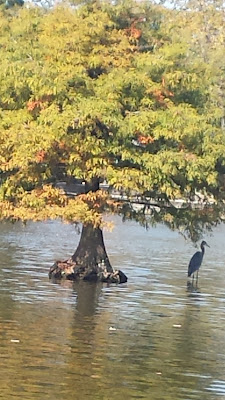 I saw this blue heron in the middle of the lake. Sometimes I feel like this: alone, trying to make a catch, hopeful, doing all the right things, and still waiting. I have submitted 70 essays this year. It seems all I do is wait, and half the time there isn't even so much as a rejection letter. It gets frustrating. When I landed an acceptance it was that "one that got away." Such is a writer's life. 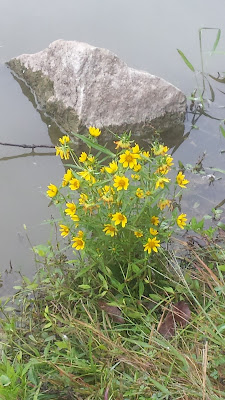 This photo reminds me to have hope, stay strong, and believe in a power greater than mine or any physician, as we await results from my son's pathology report. He had melanoma on his right ear. Last week he had half of his exterior ear and also two lymph nodes removed. His ear was reconstructed, and it is now only half the size. Waiting a week to ten days seems like years. Jason has such a positive spirit and strong faith. I am proud of him.

During the week my aunt passed away, and now her sister is at risk due to a serious heart issue. Life is as hard as a stone sometimes, and can also be as beautiful as these wild flowers.

My cousins and I were all at our aunt's hospital bedside, and although she was in pain, she was lucid and spoke to each of us. We stood hand in hand and prayed. We hadn't seen one another in a long time. It was almost like a changing of the guard. Now WE are becoming the oldest generation in our family.

I am thrilled to babysit  one of the youngest generation on Mondays. Liam happened to see the Halloween lawn inflatables at Wal-Mart. He asks each Monday if he can go see them, so on our way home I detour to the box store so he can look at them. He reassures himself and repeats everything I have told him to calm himself down. He has this little boy voice, "Don't be scared. It's okay. They won't hurt you. Just big balloons with a fan inside. Hot air blowing in. Right Nana?" He trusts and believes with the faith of a child. 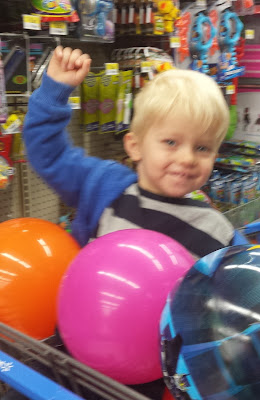 Well guess what? They had one inflatable left, but it was not the fire-breathing dragon he wanted to see. Life is full of disappointments, and also joy.

I attended an early education seminar once about "wants and needs." It's okay to WANT. If we routinely deny small children what they want, they sometimes grow into teens and adults who are unable to ask for what they NEED from a partner, a parent, a supervisor. We were urged to turn off our automatic NO response, and not over talk it: "You already have a ball and you don't need any more."

Often young children merely want the experience of holding an object, and when that need is satisfied, they can be distracted and onto the next thing in their lives.

When he saw a bin of balls he squealed, "Balls! I want the orange ball." I talked to the orange ball, NOT Liam, and said, "Orange ball, Liam is going to hold you, and then I will put you back in your bin."

Bill looked at me like I was crazy. Liam was trying to process it all as he kept asking for one color after another until he was surrounded by balls. He was delighted. Then I took one ball at a time and put them back. I told Liam to say goodbye to the balls and tell them we'll be back soon. No fuss, no wailing. He had his wants and needs met. We were soon on our way home. That's really not spoiling. I did not buy all the balls. 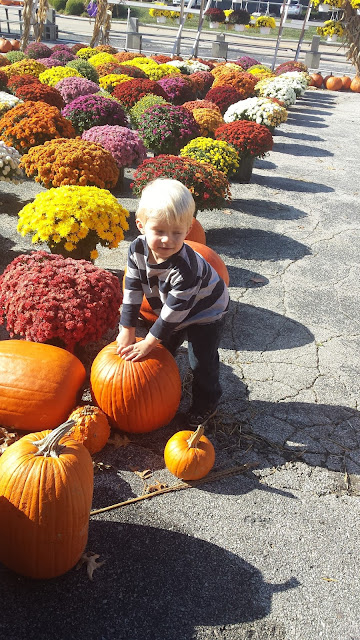 We took a walk to the pumpkin patch on the corner, a little shop that sells seasonal things. He WANTED the biggest pumpkin. I acknowledged, instead of denied, and I did not reason with him on an adult level.

He realized he couldn't lift it. I didn't have to point out his inability.

Well what do you know? That little one at his feet was just his size. And he came to that conclusion with out my convincing.

He sat in the grass with his pumpkin and was so excited when I told him we were going to color it with crayons. 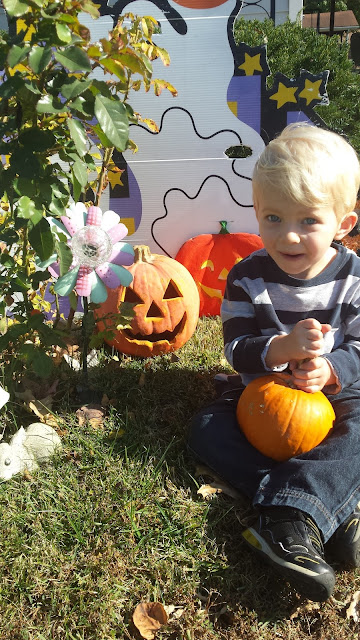 And then I brought out a package of golf tees, and showed him how to hammer them into the pumpkin. We had a great time outdoors on this glorious, sunny fall day. If you wish to do this activity with a little one, you can further extend the educational part. Have the child scribble a paper, then cut out small shapes. Hole punch the center of each shape, then insert a golf tee into the hole and hammer a shape onto the pumpkin. Have fun. 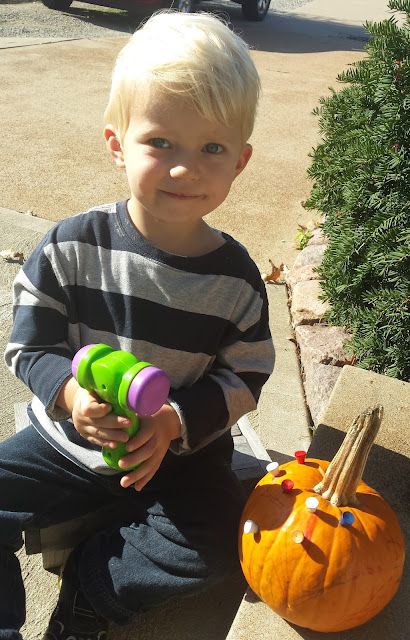 Writing seventy essays and submitting each one of them in a ten month period of time is an amazing achievement. Wish I could be even half as productive as you are! As the old saying goes, persistence will pay off.

Keeping you and your family in my prayers...

An unmet want will never harm you. An unmet need will (eventually).

I like that you talked to the orange ball so it would understand it was just a short visit. :)

Great post that is like life itself...a mix of the good and bad with hope holding all of it up!!!!

You should frame the last picture of Liam; he looks very charming in it.
Your line of education is right. Parents and grandparents have to set borders but in a smart way, like yours.

I am so sorry to hear about your aunt and son. My prayers are with you. I am so glad you have Liam. If we all could face life through the eyes of a child, I think it would make life easier to go through. And, as for your writing, I wish I was half as prolific as you are. I started this year saying I was going to submit each month.I don't think I have submitted anything since April.I keep saying to myself, "What's the use. No one will want it." But, we do need to keep submitting.

So sorry to hear of the passing of your aunt and of the health problems of other members of your family. Troubles like these always seem to come in groups. These pictures of Liam are so cute. I hope the joy he brings into your life at least somewhat balances out the sadness and difficulties you've had to deal with recently.

You always have such great creative ideas for children. Liam is a DOLL!

It looks like Liam's cast is off. I doubt that it slowed him down!

So sorry to hear about your recent hardships. You'll be in my thoughts and prayers. Thankful Liam brings you so much sunshine. He is one handsome little man. :)

Hello Linda. Sorry about your aunt's passing and soooo happy about your son's news. Liam is just an adorable little fellow----cutest goblin in town. Thanks for your visit to my posts. Susan

Linda--
I'm sorry about the loss of your aunt. But, I'm happy your son got good news. Happy birthday (and many more) to him.

Have you thought about traveling as a parenting consultant? You would make scads of money, I imagine. Your suggestions are practical as well as fun.

Oh wow. Your strength is inspiring. I am so sorry about your aunt and for what your son is going through. Lots of prayers. Liam is just adorable!

You've certainly had a lot to bear these last weeks, my friend. I'll keep you and yours in my prayers.

Thanks for sharing your beautiful boy with us, and your parenting/grandparenting tips. I wish I had been so wise back in my '20s and '30s when my kids were little. Heaven knows I've mellowed since then! And when I'm a grandma (God willing) I'll draw on all these little snippets you offer up with such grace.

As to your submissions, you're a wonder---and an inspiration. Perhaps you'll double down with your myriad skills and write a book for grandparents containing all these bits of advice you share. There are a ton of parenting books out there. A book advising grandparents, instead, sounds like a good idea to me. And you're just the writer to do it.