Many years ago when my friend was battling lung cancer, I took her for a radiation appointment.
I reminded her about a story we'd read years before when our kids were little. Two best friends, one terminally ill, made a pact that if there was an afterlife, she would send her friend a flower in the middle of winter. It happened.

That day in the doctor's office, Rose and I made the same pact.

On the anniversary of her death, she sent me a beautiful flower, with four buds. They opened to the size of large carnations...during sub zero temperatures and a hard freeze. That story was published in Chicken Soup for the Gardener's Soul.

Every year in November around the anniversary of her death, I have received a flower. 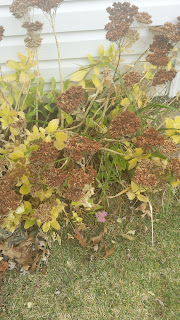 This year with unseasonably warm temperatures, it would be easy to dismiss this tiny pink flower as a straggler. But NO, it was not there yesterday, and all of the sedum has withered and dried up.

Today, on the anniversary of my friend's death, I discovered this. I say, "Thank you, Rose. You've done it again." 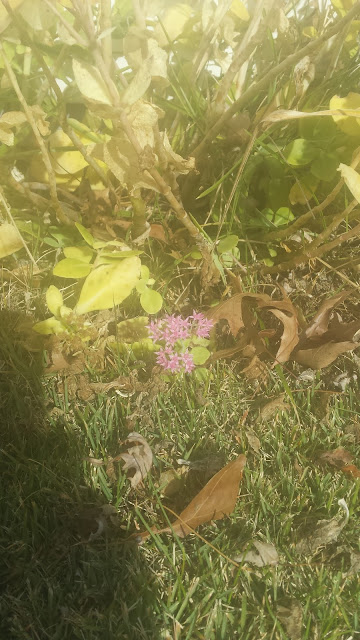 Beautiful flower that strengthens your faith. You know she must be thinking of you.

Aww...I miss her. You both were very Blessed to share in a lifelong friendship...just as Denise (Rose's daughter) & Tracey (me/your daughter) have had for 43 years & counting. How Wonderful to still have that bond/connection that spans across time & the after life.

I'm a believer too. I just can't live without belief. I've seen a few miracles in my life that stenghten belief.
I'm sure you were a good friend to Rose, and this past friendship will sure help you overcome present health issues that might threaten you or your family.

Yep, there she is.

Not that we need a flower to believe, but it's nice all the same.

No coincidences. That flower was meant for you.

Linda--You and Rose have a bond that will last forever...

I love this story. You are right about that flower. I am usually in my gardens when I feel my dad's presence.

You gave me goosebumps. And I believe 100% that the flowers are no coincidence.