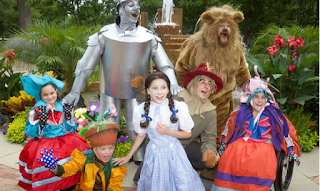 In its ninth year, Variety Children's Theatre paired with a full orchestra, an inclusive children's ensemble, talented kids with special needs, and also professional actors and dancers to bring the  Wizard of Oz production to our city.

There is no other program like this in the world, according to Jan Albus, Executive Producer. There were twenty-four children on stage with a disability and twenty-four without.

Lara Teeter, Director and Choreographer, is a Professor of Theatre and the Head of Musical Theatre Program at the Webster University Conservatory of Theatre Arts. He has performed in six Broadway shows and has graced the Muny stage many times.

Speaking of Broadway shows, last night Bill and I attended this year's performance, which was OUTSTANDING. I felt like I was in New York.

Some of the Variety Children's Theatre performers, actors, dancers, and interns had limited vocal ability, yet each introduced themselves and their positions with such pride and confidence... to rousing applause.

The opening comments and introductions moved me to tears because I have taught children with many capabilities and some with severe disabilities. The pride these performers felt equaled the pride felt by their families and audience members. This was a night to remember, a performance beyond comparison, and I felt honored to be in attendance.

My classroom motto Never say, "I can't." Always say, "I can try!" was in full force with these talented and determined Variety Children's Theatre performers. WOW! The cast of determined individuals was phenomenal.
Posted by Linda O'Connell at 9:29 AM

Thank you for sharing, Linda. We need to know about the truly wonderful people who live in our world!

In our local little theater performance of The Wizard of Oz (our granddaughter was the Mayor of Munchkinville and a monkey LOL), the Wizard was a young man with a disability. He had a booming voice, though, and sang wonderfully. Love your motto, Linda. A great one for writers, too! Love this post.

When the kids were younger we used to go plays all the time - they were so much fun! Glad you went.

Some years, we'd have a burial for "I can't." We'd dig a hole and bury all the slips of paper that listed the things we felt we could not do.

I'm glad you got to see that performance. It sounds like it was quite moving.

I'm sure that must have been a fun and inspiring performance.