Last Sunday I was driving us to breakfast because Bill has a bad knee. I had no idea we would be in the emergency room fifteen minutes later.

An uninsured, 40 year old,  pick up truck driver, under the influence of narcotics, ran a red light and totaled my car. If the impact had been three feet back paramedics think I'd have been a goner. 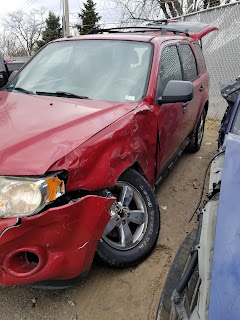 As it is, Bill and I are recovering from contusions, abrasions and awful bruises. Each day last week we discovered more muscle aches and bruising, but we are on the mend now, dealing with insurance, and replacing a car. Not something we planned on, but we are grateful we weren't injured worse. The driver and his female passenger were not wearing seat belts and sustained more serious injuries.

In my case, my hard head paid off. They did a CT scan. No concussion or brain bleed. Very bad bruise above my temple. My skull hurts, but the headache has subsided, and I no longer feel goofy.

When a life threatening event occurs, it makes you appreciate your life. Bill and I are grateful for one another and thankful that our little guys were not with us. We have to replace the car seats because they were involved in a collision. Just the little headaches of dealing with paper work and being redirected to claims adjusters, etc.

People asked if I was angry. I am not. Our uninsured motorist reimbursed for damages which did not cover the cost of a replacement car, but helped.

I figure the driver and his passenger have it far worse than we do: injuries, vehicle impounded, numerous traffic violations, and  possibly jail time. I wish them well and hope this was a wake up call for them. It does no good to hold a grudge.

Liam, Alex, and Charlie are a handful, but they make me so happy. I babysit two days a week, one or two at a time. 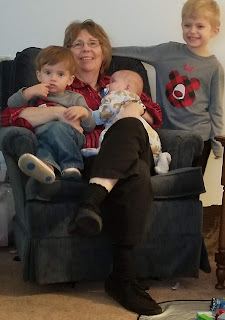 Liam misbehaved when I visited him at my daughter's house. I had to correct him. He asked, "Are you going back home when Nana Tracey gets back from the doctor?"

He said, "Will you be gone when I wake up from my nap?"

I said, "No, I'm thinking about spending the night here."

He looked aghast. When my daughter came home he said, "Can Nana Linda leave now?"

He tried a new approach. A few minutes later he came out of the playroom and said sweetly,
"Nana Linda, you'd better leave. Papa Bill is missing you, and he really-really needs you."

I hugged him and told him Kindergarten was going to be really fun for him, maybe not his teacher.

We took Alex to McDonald's Play Place Friday. We ate our meal, and then I took him in to play on the baby slide. Suddenly he spied Bill through the plate glass window. He screeched excitedly, "Paw-Paw!" and left the play room to greet him... again. He jabbers constantly and is saying more words: cookie, Paw Paw, car, go-go-go,  DON'T DO THAT! Don't touch!
He is going to be  talking in paragraphs soon.

Charlie is pudgy at six months old, and he loves Papa Bill. He watches him all the time and coos at him. Bill says, "That's the only grandchild who hasn't been afraid of me." Their relationship is fun. 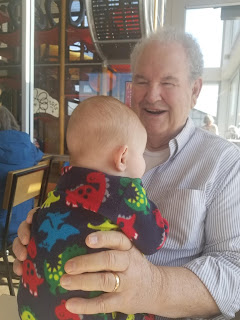 So scary to be in an accident. Sorry to hear of your injuries and loss of the car, but I'm glad it wasn't even worse for you. You just never know what can happen, I guess.

Liam's comment about Bill missing you made me laugh. He's scheming, I think. Ha! Those boys are all so cute.

OH, thank God you are all right and your little guys were not with you!!!

It may be inappropriate and in bad taste to say this...but I feel like I should console you on losing your goofiness.

Linda--You and Bill are soooo lucky. I'm sorry you two were hurt, and I'm sorry your car was totaled, but you are alive and the bruises, contusions and abrasions will heal--leaving you (I know) stronger and more grateful.

What a relief it's just the car and some bumps and bruises! So glad the boys weren't with you! Sounds like you might have a concussion.

Heh, heh, at Liam trying to get rid of you. He must have had some more misbehavior penciled into his schedule that day! Testing the limits, moving towards more independence... all a part of growing up.

So bad for you. Will they pay for a new car for you?