There is joy-joy-joy in my heart

I have missed my babies! I surprised them this weekend with a cake. Their mama is my first grandchild, and she was such a cute, smart, fun and funny honey. Now she and her husband have three cuties of their own. I baked a Halloween theme birthday cake for her with three little ghosts.
Charlie is two and loved the cake, as you can see. He is talking up a storm these days. He has always called me Nana. But now he has decided I am Nanny and those yellow things he eats are nanas. He is all boy and has mosquito bites and scrapes all over his legs. He wanted me to kiss his boo-boos, all ten! 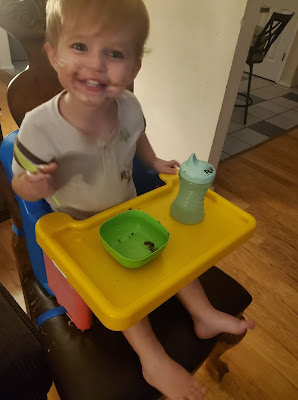 Alex is three and loved hammering golf tees into the pumpkin I brought. I also brought pop beads. Anyone of a certain age remember those? Now they call them something else and they come in all sorts of shapes. But Alex liked the round beads that fit over his head. He is a busy boy.

Liam is six and adjusting to his new reality of Covid-19 in school schedules and video schooling.
After much resistance, he decided on his own to take off on his two wheeler. He had to show me
how good he is at riding his Razor scooter, too. Look at those legs in mid air! This boy is all arms and legs!

My daughter was nineteen when her baby girl (the boys' mama) was born. I was with her during labor and delivery. On October 12th as midnight approached, I told the doctor if he didn't deliver her soon, I would forever call her Freddy or Jason (from the Halloween/horror movies, Friday the Thirteenth.)
At one second after midnight she entered the world. A nurse recorded the birthdate: "October 13th," she shouted across the room.
The doctor looked at me. I shook my head. He shouted back, "It is not one minute after midnight. I'm calling her birthdate as midnight on October 12th."
So technically... well you decide. The delivery room attendants debated it and in the end, the doctor won.
This young woman has given me so many laugh lines, and three delightful great grandsons. I love them ALL with all my heart. 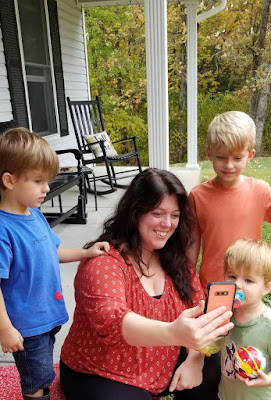 They were watching a video of themselves playing, chasing each other and bike riding.
Posted by Linda O'Connell at 8:04 PM

Those boys have really grown while we were away from seeing pictures! I loved POP BEADS! Now I want a golf-tee pumpkin. You could hammer in the face, without cutting out the guts. Of course, there would be no candle inside, but it would be good for a daytime jack-o-lantern. Alex has socially-distanced his tees nicely.

Gosh, but the boys are getting big. Time flies by so quickly!

Adorable Mom (your granddaughter) and her three boys!
They are a constant joy to you, and to us, the readers, a great pleasure to see their pictures.

Enjoyed your post. One of my sons was born on December 13th and I loved pop beads and have a necklace made from them. Those boys sure are cuties!It's been nice watching them grow.

Oh, look at that pumpkin, what a creative idea. So, you have great grandchildren, that's wonderful! Your grandsons are so busy doing fun things outside, and they have the sweetest smiles. Enjoy these precious moments. Love those colorful beads Alex is wearing. They remind me of the beads I saw in my granddaughter's room today - they looked a lot like this, but were Rosary beads. : )