Grandkids growing up! Nicholas graduated last weekend and is destined for a good paying job starting next week. We are very proud of our instrumentation electrician. 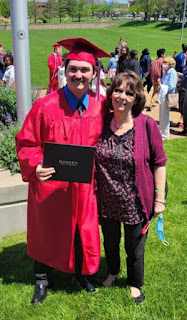 Morgan graduated yesterday with a degree in psychology. She is destined for grad school and  pursuit of her masters in the fall. So proud of the hard work she put in these past years. Her last paper was on how music can be calming. She used Bill (her grampie) as a case study. She interviewed him on the phone and asked him to name 10 songs that had an effect on him growing up.

When he replied, "Tutti Fruiti," she laughed and thought he was joking. He named many other rock and roll songs which he loved to dance to over the years. He got so into it, he pulled the songs up on the internet and played each for her. He made her a tape of his old favorites from the 50's.

This memorable moment made me smile, sniffle, wipe a tear, because the days are sometimes long, but the years have flown. Our knees are too bad for dancing, but we used to jitterbug all night long. The professor's comment was that music for Bill's generation represented social engagement and this generation has music at their fingertips and in their earpods.

There were some memorable moments in Morgan's graduation ceremony. To begin with, the audience was asked to stand for the national anthem. Everyone stood. And waited. And waited. And waited. Technical difficulties... so we sang acapello. It was a moving experience. But not quite as moving as the older gentelman whose grandfather graduated in 1910, but his family had no record of it. Research proved he did indeed graduate from the college, and so the gentleman was presented with his grandfather's degree. He accepted it, turned to the audience and saluted. A memorable event, but not as memorable as what happened today.

Morgan's parents and brothers moved her out of her apartment and back home. She wanted to keep the fullsize bed she'd had while away, and advertised her single bed for sale. A buyer was coming at 4:00 p.m. to purchase it. So, her brothers sat it on the front lawn and pulled the moving truck in to the driveway. Nine of us helped unload the truck. Bill was the doorman. The young ones carried her belongings in. The house was filled with people coming and going.

Bill opened the door for a woman we did not know. (neighbor?) She greeted us and began walking around. Her husband followed. Asked if the barking dog would bite. We said no. He petted the dog. They began commenting about the furniture. Told the bed was outside, they said they didn't want a bed.

"We stopped here because we saw an Estate Sale sign on the corner and figured this was the place."

We will laugh about this in years to come. "Grandpa let strangers in!"

And so, a new chapter begins in the lives of grandson Nicholas and granddaughter Morgan.  We are thankful for family.

You and Bill could have made a sale! The folks who came into the house for an estate sale won't forget it either!

Best of Luck to Nicholas and Morgan - your charming , successful grands!

Such wonderful moments to witness. You are truly blessed!

What a wonderful time in your family's lives.

Nana and Papa always told us to keep the door locked! Who let the strangers in? Papa!!!

What wonderful achievements that your grandchildren have made, Linda. I've always admired the electricians and their knowledge. I smiled when I read Bill's song he liked. Music truly does soothe, and I just went on a road trip and listened to some of the old classic songs we heard growing up. That's wonderful that you used to jitterbug all night long back in the day. I enjoy reading your stories, but I was wondering if you have the font so small for a particular reason. It's hard to read sometime with these tired eyes. : )

Congrats to the graduates! I guess Bill gives new meaning to: "never met a stranger."