What is a gorget?

The male ruby throated hummingbird has a bright red gorget, the colored area on its throat and chin. 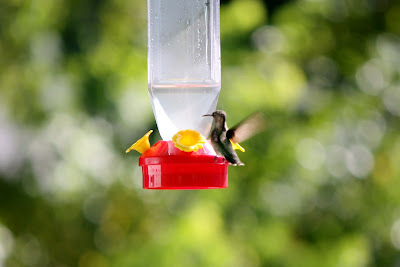 These are two of the six hummingbirds in our backyard. 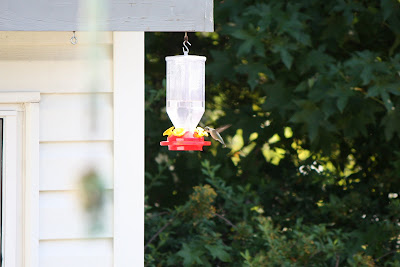 Have you ever wished you could fly? Hummingbirds flap their wings fifty times a second, and they have the ability to fly left, right, backwards and forwards and even upside down. Our visitors arrived a couple of weeks ago, and it appears that they are going to be long term guests for the next month,anyway.

Typically hummingbirds arrive in Missouri in April and depart in September, gone by October 1st. They fly at 27 m.p.h. if there are no tail or head winds. Some migrate south to the Florida Pennisula and island hop, others follow the Texas coast or fly 500 miles across the Gulf of Mexico, which takes about nineteen hours. That is why they feed every ten minutes and may consume up to 2/3 of their entire body weight in a day.

I thought that hummingbirds ate only sugar water and nectar from flowers, but I learned that they have grooves on the sides of their tongues so they can catch insects in midair or snatch spiders off leaves. They need insects for protein for their long journey. Hummingbirds also eat pollen.

They dive bomb one another, chirp and utter shrill sounds. The males are very territorial. But they also do this wild mating dance, and the female hangs upside down while they mate. Hubby put up three feeders, one of the feeders has a perch on it. It is amazing to watch them sit perfectly still and feed on the one with a perch. The other two feeders do not have a perch and the birds flap their wings as they feed. They prefer the roost, lazy little pudgies. They are bulking up for their long journey. I am told that they will return next year, the same birds! Now isn't that one of life's little mysteries?

We enjoy sitting on the patio and observing their activity, which can get quite raucous. They come precariously close to US and I am afraid I'm going to find a beak stuck in my cheek. The largest, fiercely territorial male spends so much time fussing and fighting, it seems a waste of energy. Hubby bought additional feeders, but their bickering has only increased. I just read that they share better when their is one feeder. I'm going outside to take all of them down but one. I'll let you know.

If only we writers had the diligence of the hummingbird, wouldn't we be accomplished?
Posted by Linda O'Connell at 6:07 AM

I have always found hummingbirds interesting - thanks for the information. They are amazing aren't they?

This summer, I have seen more hummingbirds and butterflies - maybe it was all that heat that brought them here.

If you wear bright-colored clothing, they'll approach, thinking you may be a nectar-filled bloom.

I was surprised at how loudly they chirp...imagine if the volumes of our voices were in direct proportion to our size?

We rarely have hummingbirds at the house anymore and don't know why. However, about a month or so ago, a couple have been hovering around the Mexican petunias and decided to stay a while. I even saw one get a drink from the bird bath, something I have never seen before by a hummingbird. Amazing little dots of flight!

Great post, Linda! I put up a hummingbird feeder at my cottage this summer and had at least two of the tiny things feeding at it for most of July and August. I recently heard that they leave our area (eastern Canada) around this time of the year, so maybe they will visit you on their way south. Wouldn't that be something? To have the same hummingbirds in your yard that I had in mine? They are fascinating to watch and listen to...they sound like little helicopters when they're flying over my head.
PS. Hope you figure out how to change your signature line for when you leave comments...saw your recent comment on Ginger Coutier's site and when i clicked your name it took me to the gospel music site again...Good luck with that--wish I could help but don't know how.

Thanks for reminding me to go mix up more sugar water! They are fun little guys to watch, and you described them just perfectly.

My mom has some weird kind of tree with big pink flowers. The hummingbirds swarm it. So do the bees.

Yes, indeedy. If we were more like hummingbirds, we'd accomplish so much.

Thanks for sharing your hummingbirds with us.