What a pain in the neck! 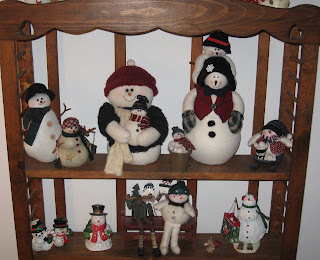 These are a few of my favorite things. Actually, these occupy only two of the five shelves. It makes me happy to see these little cuties. Our weather is unseasonably warm and it doesn't seem like we'll be seeing any real snow buddies anytime soon.

Talk about a pain in the neck! I had an accident yesterday on my way to work. I stopped for a man with his dog in a cross walk and was rear-ended. Nicole was in her car seat and we both yelled, "Ow! My neck!"

I called hubby who was without a car because his transmission on his 2010 had lost its fluid. He said, "I'll hop on my bike and be right there." What a guy! He would have, but my daughter-in-law picked him up and brought him to the scene, and then my son arrived. He called his boss to report that he wasn't returning to work; he was taking his daughter home. His boss said, "I can't talk. I have to go. My daughter had a roll over accident."

Was it 12/12/12? The police officer said I was his third accident and it was only 8:45 a.m.
So other than BEING a pain in the neck, I have one. But I am very grateful there's nothing else seriously wrong with me. Certain people might disagree. Maybe I should rephrase that.

The emergency crew checked us out and said we would be sore for a week or more and to keep moving our necks and stretching the muscles. I look like a stalker turning my head as far as I can to the left and then right. People think I'm odd or very interested in them. My severe headache subsided and I am thankful it wasn't any worse.
Posted by Linda O'Connell at 10:03 PM

Well. Now other people are giving YOU a pain in the neck. Even Steven, perhaps?

Not that I am wishing any hurt your way, after you so kindly gave me two new names, both of them being euphemisms for practitioners of the world's oldest profession...

That sounds serious, with a headache and all. You might want to get that checked out if things don't improve. Maybe your local bookmobile is running a special on cervical spine exams this week. ;)

People THINK you're odd? How interesting... ;)

Glad you came through reasonably well. What a crowd of well wishers you acquired!

The world does feel a little on tilt right now. Sure glad it was nothing worse for you. Neck pain is bad enough. Niece just had rear ender too...she has concussion. Did your air bag go off? You did not mention so hope not. Today this week ending...wish a calmer one for next week!

Hi Linda....Oh what a wretched day for you. I am soooo sorry. Seems like when it rains, it POURS.

Well, at least it wasn't worse, you are right.

Hope they can fix your honey's car, too. Susan

What bad luck hope you recover soon from your injuries.
Merle....

Oh, no! I'm glad you and Nicole weren't seriously hurt.

I was rear ended earlier in the week on the way to work! Thankfully, everything is okay.

Hope by now you're feeling much better, Linda. Take care.

Gosh Linda, I'm so glad you and Nicole weren't seriously hurt. Whew. Hope you are all back to normal now... I'm so behind on my blog reading, I'm sorry I didn't see this sooner. Sending love your way.

Oh my goodness glad you are okay - sorry I am so far behind in my reading!

Yes, so grateful it wasn't worse!