He cracked me up!

I was making an omelet for my honey for breakfast. I usually use six egg whites and one yolk.
This is what was left over, so I popped it in the microwave for a few seconds. 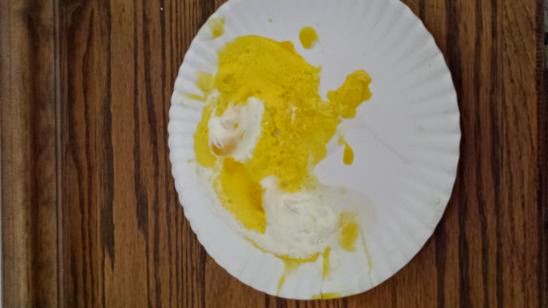 Meanwhile, Bill came into the kitchen and asked, "What is THAT?"

His beady little morning eyes widened as though he had seen a ghost.
"Are you kidding me? What IS that?"

He said, "You're not kidding, are you?
I said, "No. Why are you so upset? Because I microwaved it? I know you boil the eggs and save the yolk for your trained mocking bird outside. But these yolks are cooked."

He shook his head in disbelief and said, "Do you mean to tell me ALL that mess came out of that one little egg in the nest you messed with?

I laughed until my sides hurt. I cackled, "No, they're chicken eggs from the store."

Last evening I discovered a mourning dove had built an extremely  tiny little nest, and had laid three eggs in it ON TOP OF A BUSH. The nest was so small, two of the eggs had already rolled out and were broken. To save the one egg and protect the bird and her nest from the impending strong storms, I found an old straw hat and added her miniature nest, which she was too big to even sit on. Then I placed it inside the bush. 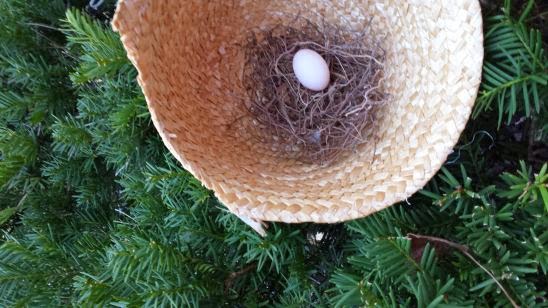 "You have to quit fooling with mother nature," the big guy said, as I continued to laugh. Her'es hoping we hatch a young'n.

Oh my gosh! While I am inclined to agree with the Big Guy, that Mother Nature knows what she's doing, I love your kind heart to give that mother bird a little added help!

Oh, Linda. If you get a baby bird out of that bush, I think you should write it up as a story. It would be a sweet one...

Here's hoping that the one surviving egg gets a chance to hatch. Keep us posted!

Something about feeding eggs to a bird just sticks in my craw.

Good luck with your hatbird.

I hope your bird makes it... and yes, I have spring fever, I've been cleaning like crazy. Not exactly my favorite thing, but... it feels good.

Love your nurturing ways, Linda, as well as your sense of humor. There must be constant laughter at your house! Also, your new picture is gorgeous. Happy spring to you!

So he thought you'd robbed the dove's nest for his breakfast?! I guess it would be a fair trade when you figure all the eggs he's given up for that mockingbird. I love the sound of mourning doves, but they don't strike me as the smartest birds in the world. Hope the hat helps!

If it hatches, you'll have to name it Hattie!

I'm sure that Mama Bird was happy with your nest-construction skills. :)

That story made me laugh. I hope your little egg hatches.