In December 2015 St. Louis had a 500 year flood that wiped out homes, towns and devastated areas all across the Midwest. This week major rivers and tributaries are rushing out of their banks, breaching levees and overtaking towns across the Plains. It is still raining and the rivers have not crested.

Sixteen months after the last major event, we are experiencing another historic flood. This time residents were more prepared, and volunteer sandbaggers worked hard to save the businesses in historic Eureka, MO and other towns. I have friends going through this horrible devastation, again.

Major highways and over 100 roads have been closed.  Authorities and officials are telling people to choose a side. Literally. You will be stranded to the north or south of the Meramec River which is again swallowing homes, bridges, towns. We live at least five miles from the nearest river, which is shown in  this newspaper clip. Our family members are affected. Trying to get to work has been a tremendous battle, as secondary and rural routes are going under and being closed. 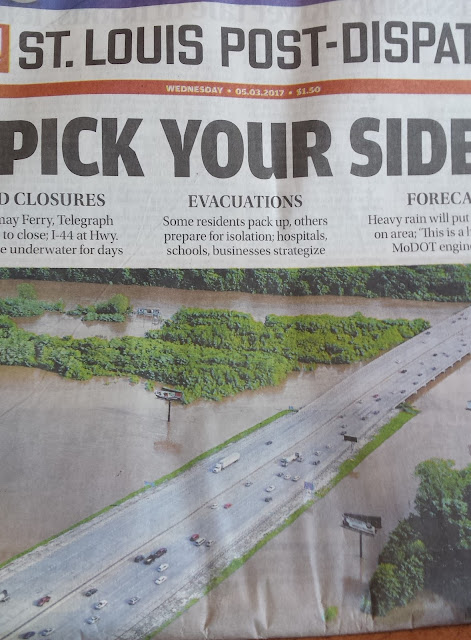 At noon Wednesday we were headed to the grocery store and Taco Bell for lunch. After stopping at three different CLOSED Taco Bells because employees were stranded, it made us aware of the economic impact this flood is creating for individuals and businesses. Many employees, staff and faculty members from businesses and schools on high ground cannot get to work. They live on the South side of the Meramec River which has bisected our town.  Many who work or live in Jefferson County are stranded or choosing to stay put there. This flood is separating us.

Those on the North side of the waterway who live or work in St. Louis County are also hunkering down there. Some have no choice. Hospital personnel are staying at work because they cannot get home and are afraid if they do make it home, the rivers will rise and cut off their road access.

It is an absolute mess here.

There was one passable lane on a secondary road in South County yesterday, and the semi trucks were heading convoy-like in that direction. What would have taken minutes to travel, took hours.

This is what we came upon as we drove five miles south to the grocery store. Interstate 55 southbound was completely shut down just past Highway 270., two exits away from us. 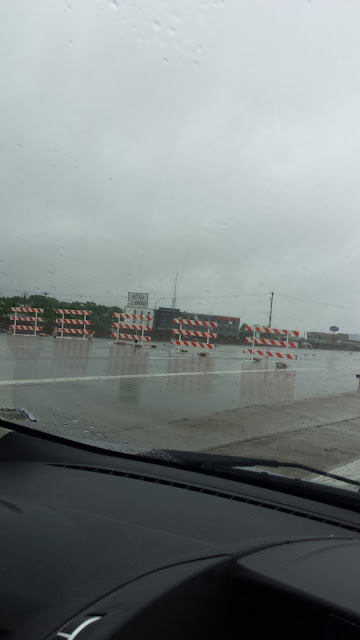 And this morning, the news channel showed an aerial view of the Arch grounds. The Mississippi River is at 40.6 feet and still rising. The muddy waters are almost to the top steps of the Arch grounds, which have been newly replanted and designed for future outdoor use. And...

It is still raining! Our local weather guy announced this closing, "Noah's Ark Daycare is closed due to flooding."

It's either laugh or cry around here.

Next week's weather prediction, sunny and 80 degrees. Wow! What a ride.
Posted by Linda O'Connell at 9:12 AM

Strange flooding and horrid. Never saw 44 torn up too. A man said it took him 8 1/2 hours to get from Joplin to St. Louis. Even in our little community, a roundabout was backed up 15 minutes to into Joplin! Hope everyone stays safe as possible.

We're helpless about the weather. Only God can control weather. People are angry when they hear me talk like this saying that science will take care of it. Well, science has promised to find a cure to cancer, and it didn't even find a cure to flu and baldness. Anyway, hope you'll all be safe in that floody area.

Oh my! It's hard to imagine how bad it is. Sorry to hear that your family and friends are affected. It's going to take some time to come back from this even after the water recedes. Prayers for all those who are struggling there. Hope everyone can stay safe.

Linda--Yes, I laughed when I saw that Noah's Ark Day Care was closed.

I'm going to conserve gas and float to work on a large piece of cardboard...

I remember how bad it was during the Flood of '93. I was working down on South Broadway, where we'd just moved our unemployment office from the area by the Bevo Mill. Our new office flooded, and they shipped us out to various offices. I ended up at Crestwood. Traffic was unbelievable. We drove up 67, 55, and 270. Or we might have tried Lindbergh instead of 270. Good thing I was paying a guy to ride with him! At least he knew the way. All roads were clogged and bumper-to-bumper. It took us a couple of extra hours EACH WAY!

We had a lot of new forms to fill out, too, because of people out of work due to flooding. I think they can file by phone these days.

Oh gosh, Linda. It has been so terrible there. My sister was in Branson and got back to California just in time! Hope you are safe and that soon, very soon, you will also be dry. Sorry for all the bad, flooding weather. Mother Nature can be uncooperative at times like this. Take care, Linda, and stay safe. Susan

Ah yes, sunshine today though... and loved your previous posts...

Gotta keep your sense of humor when you live in the Midwest. We had planned to take a trip to our farm this weekend, but we can't get there from here because so many roads are closed.
Cute sign on the Noah's Ark Day Care.