Rarely is a summer day so beautiful in St. Louis as it was on Sunday. The temperature hadn't reached 80 degrees, and the strong breeze had blown away the thick tropical storm clouds from the Gulf which had wrapped the sky for the past two days.

My honey drove to the river park where we enjoyed walking a short, circular trail. We sat high atop a bluff and watched the barge traffic on the Mighty Mississippi.

We laughed at the antics of a group of young people. The guy who appeared to be in his late twenties, wore a U.S. Army olive drab T shirt. The five girls with him were preteens to older teens. We laughed at their antics as they all climbed a fallen tree and walked across it to the wide end. Their squeals and laughter made us laugh. The youngest was the wisest. "HUH-UH! Get me down!" 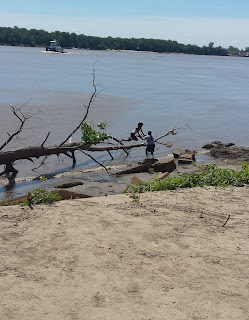 The older teen, seen here, a high school junior, had difficulty dismounting. Despite the soldier's assistance, she hit the boulder and gashed her lower leg wide open. I tired to treat her by dousing bottled water on the wound to get some of the contaminants off, but she carried on like I was killing her. So the fellow said he'd run home and get the car and take her to the urgent care. He really meant RUN home.

He said they had all run DOWN HILL from the main road two miles away. He was heading up hill when Bill offered him a ride. He was the girls' uncle who was home on leave. I sat with the girls while my honey transported the guy to his apartment to get his car. We wished them well, thanked them for the earlier entertainment, before the young lady injured her leg. They were on their way.


And so were we... to another park. We attended a graduation party for one of my former preschool students, an outstanding young lady, whose path I've followed through her mom's newsletters, She is headed to the University of Pittsburgh. I cannot begin to list Savannah's achievements and accomplishments. She had personality plus and leadership ability way back when she was four, and I know she will make a difference in this world. When I learned she would be studying Political Science AND writing, I was thrilled. It is nice to see how my students fare in life. Rock on, Savannah! 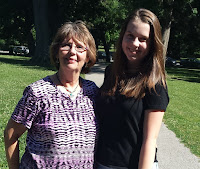 In the evening, we headed to another park, which features free concerts on Sunday evenings. Dirty Muggs was a lively band that played current dance music. There is a concrete pad in front of the pavilion which overflowed with a crowd of folks of all ages and ethnic groups shaking it to the left, shifting to the right, stepping forward, spinning and having the time of their lives. I love to watch people, and I was in the right places on this day, for sure. 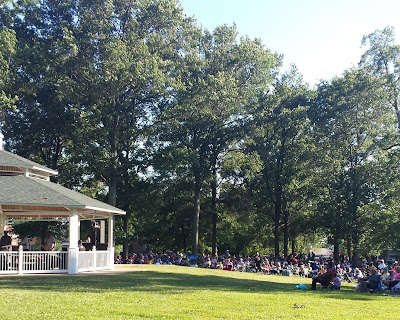 There is just something freeing about being in the park. As the white haired park ranger made his rounds, he boogied to the beat and even danced with many of the women standing near their chairs grooving to the music. Laughter is good for the soul.

Check out the middle age gal with the hula hoop. Her friend arrived on a red motor scooter wearing a red lady bug helmet. They shimmied all evening with their huge hoops. Many years ago I was on a beach in California, where I observed some very colorful characters as well. This reminded me of that time. 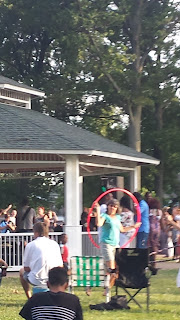 As I gazed down the hillside at the fountain spraying diamonds of droplets in the middle of the fishing lake, I noticed this woman who had strung her hammock between a light pole and a tree. 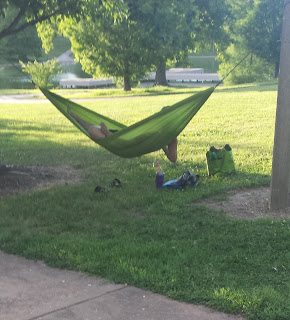 What a way to spend a Sunday. Breakfast out with a couple we know, and then gallivanting in parks.
To top it off, I saw a fellow writer, texted her and asked if she were at the concert. She asked how I knew. I replied, Look over your left shoulder.

She introduced me to her male friends, then said, "Linda is prolific, she has written stories for 50 Chicken Soup for the Soul books." 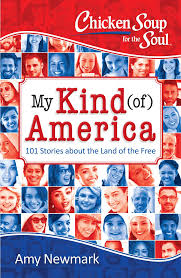 And this is my latest with a release date near the end of August.

What a lovely day you had!!! the weekend here had delightful weather, esp the mornings. Cool and inviting to be outside, but sure it won't last as July comes along.

I agree with Bookie. What a lovely day, and the weather was wonderful. It's so great that you have kept in touch with your preschool student. And congratulations on #25 in Chicken Soup for the Soul. That's an amazing accomplishment. Here's to 25 more!

Linda--I'm going to raise my glass up with Donna. Here's to the next 25. Congratulations. I wonder if you're one of the national Queens of Chicken Soup? I imagine there aren't a lot of writers who have published more than 25 CS stories.

It sounds like you had a delightful day... in spite of your companion.

LADYBUG helmet! My mom used to love people-watching. You never know who's going to turn up at a free concert in the park...

Congrats on #25, and best of luck for many more Soups.

It sounds wonderful. The sun seems to bring out the best in everyone (unless it's blisteringly hot, then tempers rise!)

Congrats on the new publication!

This sounds like a great way to spend the day, enjoying nature and surroundings and restoring your soul. Congratulations on #25 for Chicken Soup!