Originally I named this three year old cat Sassy. When he found us during winter, he was a terrified yowler who flinched at touch and snapped at hands coming toward his face.

He has since developed trust, calmed down, and although he is still a sassy talker, his voice is less piercing and quieter, and he's become quite the lover boy.

My granddaughter has decided not to name their baby Charley, (as Liam and I had hoped,) so now WE have a Charley. And he actually responds better to his new name. 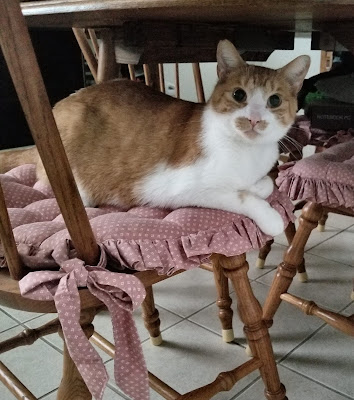 Today I planned on telling you how sweet Charley has become since I gave him a bath last month. He did not resist and enjoyed it. He is more affectionate than ever, translation: pat me, touch me, hold me, PLEASE.

At night when we go to bed, he waits until we're snuggled under the covers, then he pounces up onto the bed, cautiously walks up to look at me, and meows softly. He walks over, gazes at Bill, and meows into his face, as if to say goodnight. Then he pads to our feet and curls up. I cover him with a small blanket. He sleeps the night.

At 4:30 or 5:00 a.m. he starts meowing softly, then a little louder. If I ignore him he walks up and looks into my face and gets increasingly noisier. I fake sleep, so he reaches over to the nightstand and does what he sees me do each morning. He reaches for my glasses. Sometimes I catch them before he sends them sailing onto the carpeted floor.

And so our day begins. I feed him a big breakfast, but he would eat all day if I'd let him. We researched his breed on line and discovered Charley is true to his DNA. This type of cat is VERY affectionate, always wants to eat, and 80 % of litter mates are males.

Charley has been an inquisitive snoop and nincompoop this week.
He found a new perch and actually thinks he's hiding from me on a kitchen chair. He's been reaching on our desks to see what he can knock off: ink pens, papers etc. This morning he had fun catching fluttering butterflies. 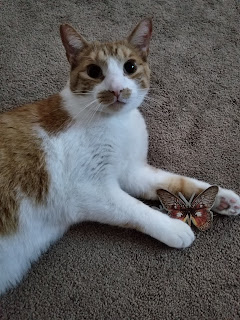 They were just out of reach on an end table. Liam had been matching sizes using the butterflies I cut out from a decorative Kleenex box. Charley finally knocked them off, caught them as they fluttered down to him, and happily tossed them into the air. He has all sorts of toys to chew and chase. 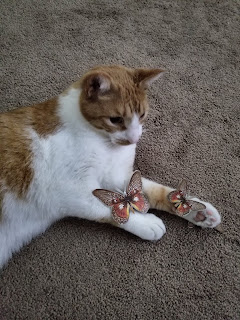 However, today he prefers MY things. He swiped seashells from the shelf behind him and knocked them all around. He found my pillow and attacked it. He's looking for trouble today. 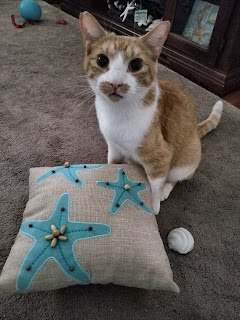 I think Charley has spring fever. Do you have spring fever? I do.
Posted by Linda O'Connell at 8:44 AM

What an adorable feline!

Cats seem to be bent on knocking things to the floor, including fragile items that splinter into a million pieces. I've learned to say, "Nope, I can't buy that. I have a cat."

That face! He's got to be the cutest (adult) cat I've ever seen!

His mouth is heart shaped! Most animals respond to kindness and from what I know of you, how could he resist?

He's such a cutie! He is really responding to the love and care you and your husband have given him. Glad to hear he has turned into such a sweet pet.

You know you had me at CAT. Your Charley has amazing markings. I love the heart on his nose. Our Luna is also a lover . . . and a mischief maker. :)