When I graduated high school 53 years ago I thought of graduation as an end, but it actually was the beginning of my journey into adulthood.

My mom used to say, "If only I knew then what I know now." Made no sense!

Soren Kierkegaard stated: Life can only be understood backwards, but it must be lived forward.

Makes sense now. Looking back I can see how my decisions and choices affected my life. 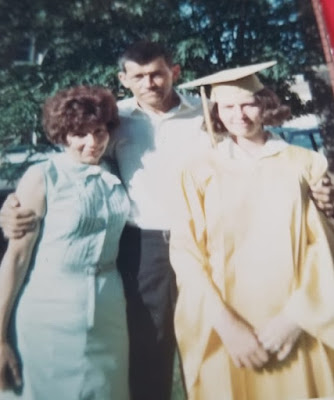 I had so many hopes and dreams for my future. Six months after graduation I married the boy I went steady with for three years.  I know!

We could not wait to get away from home. Back then, girls did not strike out on their own.

On our one year anniversary he received his draft notice, and half a year later we were in Alaska where he was stationed with the US Army. About a year after that we had a baby daughter.

I never dreamed I'd be in Alaska, but I always wanted babies. Three years later, back home, we had a son. I loved being a mommy. That was my dream come true!

This is my daughter Tracey on her high school graduation day, a couple weeks before her 18th birthday. She was Grandma Ginny's girl, and we were both so proud of her. Now she's married has a girl and boy and grand kids! Where does time go? 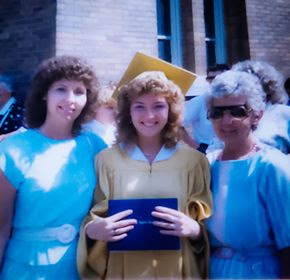 Then it was Jason's turn. He graduated from Naval Junior ROTC Academy with his future bride. He looks like a baby at age 18. Now they have a teen son and daughter. I sure was skinny back then and wore the typical 80's big hair curly perm. 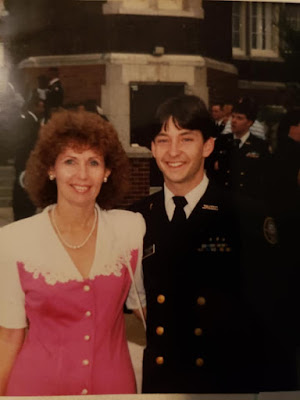 2020 has been a crazy year. He did not get to celebrate prom, senior days, or graduation ceremony due to Covid-19 pandemic. Is he disappointed? Absolutely, but he's able to accept what he can and let go of what he can't. He's resilient, ambitious and will be a success.  Life is what you make it.

He has a great attitude. Liam entered kindergarten with a head start. He could read,write, and make up stories. Due to the pandemic, his first year of classroom school ended abruptly in March, but he continued with on line learning. His teacher spoke to her class, posted pictures, promoted him to first grade and announced Liam's name as one of the future class of 2032.

He did not get to parade with his classmates, tell his teacher good-bye, or wear his little cap and gown, but he said he's okay with that. He received the most creative writing award in his class. 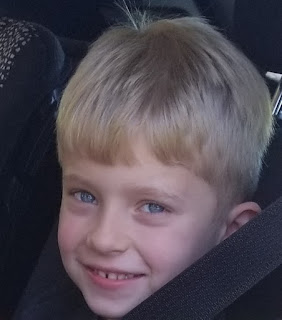 You look like your mom! And it doesn't seem like it could be that long ago that you graduated, right? That's sort of how I feel.

I got married one month after graduation. What a decision that was!

Lots of graduations, lots of memories, Linda. Such events make life worthwhile, don't they? Congratulations to all in your family who graduated. Susan

Linda--Time DOES fly. It flies faster than the speed of sound, once we're "older."

Oh my gosh! Nicholas graduated? Seems like he was just a little kid on your blog with Nicole a couple years ago.

Nicholas looks great in his blue outfit!
I'm sure he"ll be a big success in life.

Wonderful pictures and great memories. It's funny how no matter how much life changes, it stays the same.