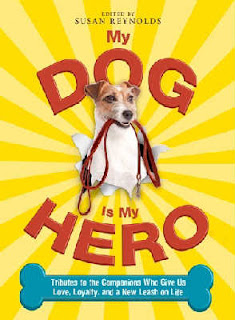 One night just before midnight while I was snuggled in bed sound asleep, my husband, Bill, who some of our friends affectionately call Willy, woke me up. He was so excited. His volume was as loud as the T.V. "Wake up! I've been on the computer, and I see that you just received an acceptance on the story you wrote about ME, titled GOOFY WILLY."

I could have flung my pillow at his head had I not been laughing so hard. My dog story, Goofy Willy was accepted by editor, Susan Reynolds and published by Adams Media.

Willy was a naughty mischief-making, overgrown pup of about three months old. His dad was a Mackenzie River Husky, but his mom was a hound. He was thick in stature, but even 'thicker' in the head. My former husband was in the military and we lived in Delta Junction at the end of the Alaska Highway, where the animals outnumbered the residents. Willy was forever getting into trouble. He stole a winter hat right off of a kid's head. There wasn't a day that went by that someone didn't report one of his goofy infractions. His worst offense was snatching a neighbor's bra off the clothesline and chewing it to bits. I buried it in the bottom of the trash bin and watched her husband set fire to the garbage that weekend. Oh Willy was a character. To read more about my dog and many others, please purchase My Dog is My Hero, available September 18th in bookstores and on Amazon.com.
Posted by Linda O'Connell at 9:58 AM

Glad you hear you have had another success story....are you back on line for real today? Glad to see your name pop up.

Congrats, Linda! Was this one of those HCI books? I don't remember hearing about it!

Yes! I am back on line again. It was a miserable two weeks in one respect. I had severe aggravation and withdrawls from having no internet/computer. BUT, I received three unexpected writer checks (though they were arriving in Dec.) and so, my honey and I went to Mexico for five days, and it was a great diversion! Came home to the new computer part, a slew of emails, one of which was this great news. It is an Adams Media publication. I had submitted probably more than a year ago, and the book has been in development. Thanks for your good wishes. Tell any dog lovers you know; buy a book for Christmas present; oh heck, tell your veterinarian to stock it in his/her waiting room. ;)Happy writing.

Congrats, Linda! If they ever want stories for My Dog is My Sorta Super Hero, then Sally Hall the Crazy Dog's in luck! :-)

Oh Linda, you must be SO ELATED. Congratulations to you! Keep up the good work. Susan

Congratulations! I can't wait to read the story. What a character!