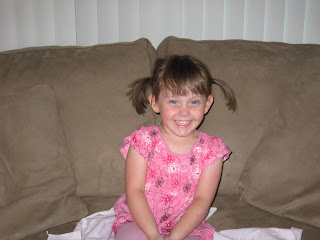 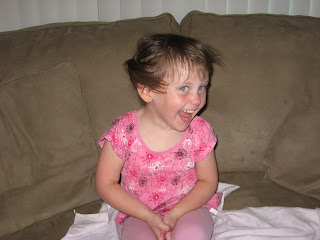 Granddaughter, Nicole, will be three the day before Halloween. Like my son (her daddy) and my daughter, she too was nearly bald for a year, had a smattering of hair at age two and now that she is about to turn three, her hair is finally growing. If she is like the rest of us, she will grow a mop of hair so thick a clamp won't hold it. But for now she is so happy with her pony tails. She has always worn her hair in a Buster Brown hair cut, so when I saw her after being away for a week, and she saw me, we both squealed with delight at her new 'do'. She was so thrilled she had to shake her head and flap her ponies from side to side. I don't know which of us laughed harder.

Are any of us ever satisfied with our hair? My hair is like a bush. Hairdressers complain about the thickness and the fact that it grows up and out instead of down. Years ago I used to get long, curly perms which required twice as many rollers as most people. These days I've quit fighting the never-ending battle of color or curl. My hair just won't hold curl, so I color and let my poker straight hair do its own thing. My daughter and son and grandkids have enough hair for two people each, and the barbers and hairdressers always comment about it.

I covet my friend, Pat's, naturally curly, shoulder-length hair. In high school she used to iron it straight. It seems that those of us who have curly hair want straight and those who have straight hair want curly.

How about you? We all have good and bad hair days, but generally speaking, do you love your hair or hate it?
Posted by Linda O'Connell at 3:47 PM

Well, Linda, to answer your question about hair, I definitely don't love it. It's so doggone thin it's pathetic. Once I was diagnosed with a thyroid problem, it got even thinner. It's SO discouraging. I envy your thick locks. Susan

Susan,
I think your hair looks pretty, bu yes, I hear what you are saying. Your style is perfect for your face. My hair goes FLAT.

Nicole is adorable! My older daughter, Stephanie, was a little baldy until she hit 3, and once it started growing, that was it. She has very thick hair, but of the straight, sleek kind, which she did not get from me. I loved my hair in my 20s and 30s; in my 40s it was curly enough to leave au natural and it looked pretty good. Now I'll be 50 (in October) and my hair has gone wacky. Straight, curly, bushy, all at the same time, with cowlicks so crazy there isn't a cut/style out there that can fix it. *sigh* I'll cope, but I'd sure like my old hair back!

Okay - I have to say - I am thankful for my hair - I have a lot of things I can't say the same thing about. lol

Hi Linda! I'm okay with my hair, it's always been straight, but thick. Back in the day I permed it and I look at those pictures now wondering what was I thinking. My kids - okay the girls have thick hair (my son used to - don't know if it's genetic or wearing a "skull" cap all the time, but he's now starting to bald at 27.) I blogged about Norm's granddaughters complaining about their thin hair wishing it was curly - and they are 7 and 8, guess it doesn't matter what your age. Your granddaughter is a doll. I loved having pony tails when I was little.

Hi Lisa,
My hair went freaky went I hit fifty, started parting on the other side,and ever since it's been more unmanagebale than before. I want my long curly perm back, but color and curl doesn't work with this mess of mine. I always love my new haircut until I get home!

Hi Sandie,
I know what you mean! But today we were at the hospital for routine visit and saw lots of bald cancer patients, so I am very thankful for my hair and extra pounds and mobility.

Lynn,
I wish my hair would lay the way yours does. Even when I get a good cut, it does what it wants, although when it's wet, it looks the way I want it to. Just dries differently.

I envy your thick locks, too!

I used to hate my hair because it's curly in humidity and straight when it's dry out. Now I try to see the glass as half full: Two styles! And besides, could be worse. At least my hair isn't sagging and getting fat like the rest of me.

Those pictures of Nicole and her pigtails made me want to laugh just as gleefully. Wish you could play a recording of those giggles. Toddler giggles are a tonic!

She's adorable and I love the pony tails! While I don't hate my hair, I don't love it either. We've kind of come to a truce; I've accepted the fact that there's a bit of gray and frizzy times. My hair, holding up it's end of the bargain, is pretty manageable unless it is super humid.
Blessings and happy weekend,
Karen