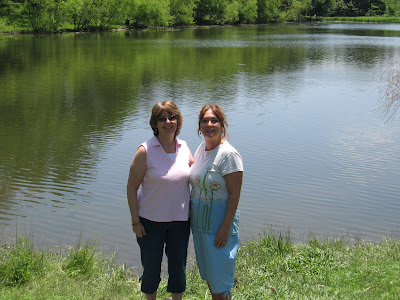 Have you ever been stranded? We all recognize that helpless feeling. Which way do I turn? What do I do? Sometimes when you can't figure it out, God sends someone to help you out. I was that someone twice today.

We spent time with my daughter, her husband and my grandson who at age fourteen, has lost all ability to speak in full sentences. Grunts and one word responses are about all he can muster. The kid can't carry on a conversation with anyone over fifteen, but you should see him slug a ball. Seriously, his coach thinks he may have a future in major league baseball. I am so proud of that non-verbal young man with straight A's. They live on this lake. It is so peaceful there. The geese have young little waddlers that are so cute! I love water. We walked around the lake. Austin jogged with his buddy. He's in training for the 'majors'. Good to have a goal in life. 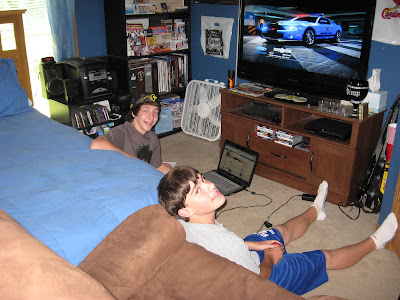 Grandson, Austin on the left and his buddy, Zach.

We were driving down the road when we saw a granddaddy of a box turtle trying to get across the road. His head out looking left, right, at us. He'd clocked a few years; he was as big as a dinner plate. I'm sure he's crossed that road a time or two by himself, but I told hubby to stop! I jumped out, picked up the turtle and placed him on the other side of the road. I felt better.

This evening as we were returning from a band concert in the park, we were at our exit. Across the road on the on ramp, I spied a grandfather with a young kid (who probably conversed fluently with his grandparents. But then, he didn't appear to be fourteen yet). They were walking, thumbing, wringing their hands, trying to figure out what to do. I recognized that helpless feeling.

Instead of turning off the highway, I went across the road back onto the on ramp and stopped. We offered assistance. Their car was broken down on the highway. The Bosnian man was ever grateful for the use of our cell phone, but alas, no one answered at the number he dialed.

So, hubby took me home and went back to pick up the man and his wife and two grandchildren and drive them home. That is the way we live our lives, doing unto others as we would have them do unto us.

Whether it is a turtle stranded on the center line, a person on the side of the road, or a fellow-writer stranded in their writing and in need of encouragement, reach out with a helping hand. One person passing a kindness forward is like a ripple in the lake.

Merely a miscommunication. It was the guy whose phone number the Bosnian man had dialed, but hubby didn't realize it until he just relayed the story to me. I am laughing so hard. He doesn't understand what I think is so funny.
He said, "The poor guy probably thinks I was pranking him," which made me laugh even harder.
Posted by Linda O'Connell at 8:30 PM

You definitely did your good deeds for the day, Linda. I would have been too scared to pick up that turtle, in case it was the snapping kind. You were brave! Take care. Thanks for all your visits to my blog and your comments, too. Susan

You and Bill are so kind, Linda. Thanks for my smile of the day.

The P.S. was great! And the story simply wonderful!

I am still chuckling at the incident with your hubby. My Linda would really appreciate you helping a turtle since she dearly loves them. Have an awesome week.

Good morning everyone, and thank you for stopping by. Have agreat day.

The line about the ripple in the lake is lovely.

I'm glad you guys helped. Too often today, people don't stop and help others because it's unsafe. And probably sometimes it is NOT a wise thing. But most of the time, you can tell the difference...

Linda, you and Bill are definitely some of the Good Guys (and Gals) in life!! And awwww, the turtle...I would've wanted to do the same thing!
And the P.S. story....Hilarious!!

Linda, thank you for this pay it forward story. May we hear more of these kind than what we are hearing in the news.

Yes, we do need more of these kindness stories! Good news is always welcome, as is a good laugh! :)

Hi,
I've nominated you for the Versatile Blogger Award. Please read my post to see what to do should you choose to accept this prestigious(?) award.
Keep up the good work.
Sylvia

Linda--good for you to offer assistance to the turtle and the family in need.

At first when I read your post I thought your grandson really couldn't speak, and I felt so bad for him, and then I realized that he just didn't bother speaking to adults around, and I felt sorry for everyone. (But I know that's what teenagers do sometimes and it usually changes and turns out fine), so I don't feel bad anymore.
But the part about the cellphone--that made me chuckle. Your poor hubby...wondering why strangers are calling him...too funny.
Have a great week.
Sylvia

I love it that you stopped for that old turtle. He might still be there without your help! A friend of mine saw a skunk by the road with it's nose stuck in a yogurt container. She stopped the car, ran over, and pulled the container off the skunk's nose than ran away as fast as she could!

We never know the possible long reaching consequences of an act of kindness. What a great reminder, Linda!

In this day and age, it is far and few between (what cliches) that someone would stop and help and drive someone home. So glad people like you exist:)

Linda,
Thanks for reaching out your hand to all of us. (And THANK YOU for the hint on posting comments. Woo hoo!!)
Best,
Allison
http://allison-thisisthelife.blogspot.com/

You definitely have some good karma racked up. :) Sometimes when we help others payment is merely the satisfaction of knowing we helped. Occasionally, we get a surprise. Many years ago during a rain storm my brother-in-law stopped on the freeway to help a gentleman whose rental car had died. He drove the man to his hotel and gave the man his home number and address in case the car rental company wanted to talk to him. What he didn't know was that the man was a regional manager with Ethan Allen. A few weeks after the incident a beautiful Ethan Allen side table was delivered as a "thank you." Unexpected, but nice!