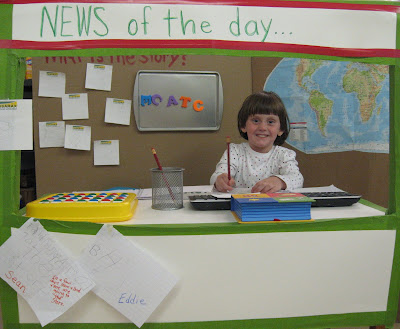 Here is the anchor desk in my clasroom where kids take turns announcing their news.

I operated a six week, half day, summer camp for school-aged children for sixteen years. I had a similar set up. It was fun listening to the 60 plus children who were divided into four age groups.

The pre K & kindergarteners announced their news about upcoming events in their lives.
"I'm going to my grandma's to go swimming."

The 1st & 2nd graders talked in depth about their sibling problems.
"I wish I could trade my brother. He always hits me. If anyone wants to trade him for a skate board..."

The 3rd & 4th graders were the most candid and I always got an earful with them.
"My dad took me to the bar and bought me potato chips, but I'm not supposed to tell my mom, oh yeah, or that my big sister snuck out with her boyfriend."

The 5th & 6th graders 'played' more than the younger children. After watching them year after year, I concluded that somewhere along the line, they missed out on PLAY. Schools rush kids into seated, structured learning, instead of targeting developmental learning. Many parents and educators believe that acadmeics should be the goal; they do not realize the value of unstructured free play in a young child's life.

Did you ever put on shows or plays when you were a kid? It requires planning, doing, reviewing, devleops leadership etc.

We have been doing a unit on fish, sorting, classifying, fishing for letters and matching them. We read Bobby Bear Catches a Rainbow Fish. We examined stuffed fish, s-m-l and discussed likenesses and differences, and then we bounced them on a blue bed sheet (water) and predicted which size would bounce higher. Lots of giggling.

We sat down to name as many fish as we could think of: gold fish, cat fish, clown fish, Nemo, rainbow trout, and one little boy announced that there are also TACO FISH, because he eats fish tacos.

And here's my NEWS: I love teaching preschoolers.
Posted by Linda O'Connell at 9:17 PM

When I grow up, can I be a preschooler in your classroom?

How fun. You always do amazing things with the little stinkers. Hope they appreciate it.

I love that they get to pretend to do the grownup news - I'm sure theirs is more interesting than the stuff on TV.

In fact, I bet you can't name as many stories from network TV news as you did in this post!

Wonderful idea and I am pretty sure you get some amazing 'news'!

I completely agree that young children should be allowed to play more at school - they learn so much through role play and through sharing, and learning to listen as well as talk.

Such a good idea to have that news desk! I'm sure the little ones really have fun with saying their own little piece of news, and you must hear some funny things sometimes.

How adorable the little girl in the photo is! And I'm with Sioux...May I please be in your classroom someday??

That would be another great way to teach preschoolers to communicate with one another and encourage conversation. We did TV interviews last week during the first week of school to encourage them to get to know new friends: http://www.brennaphillips.com/preschool-television-interviews
Great post and additional idea. Thanks.

i would love to do this with my littles. but i'm afraid they might be a little too young..?

The kid's got good taste. Taco fish are fab. Especially at Houlihan's.

I love that desk and set-up. Too cute.