Trick or Treat, or the joke's on you!

Last night we went to a belated, outdoor Halloween party. The weather was chilly, about 55 degrees, but there was a fire and a heater. There was also Karaoke, too much food, and lots of fun.

I wore my striped black and yellow, long sleeve pullover with black pants, and pinned a stuffed bee to my shirt. I went as BIG "B" and Little "B". Hubby wasn't about to wear an elaborate costume, and even insisted he would only wear a T shirt with a slogan.

I convinced him I would make him a costume that he could slip over his head and take off soon after we arrived. Bought a yellow disposable table cloth from the Dollar Store and cut out a bee pattern, drew some lopsided stripes. He tried it on and said, "I look like a wood bee."

He had so much fun telling everyone, "I WOULD Be thinner if it weren't for my honey. I WOULD BE happier at the beach. I WOULD be ... " 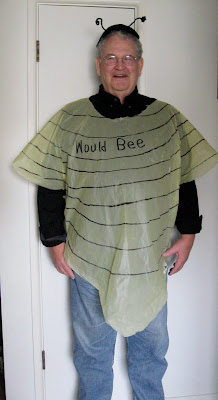 He thought his jokes were hilarious because everyone laughed ... 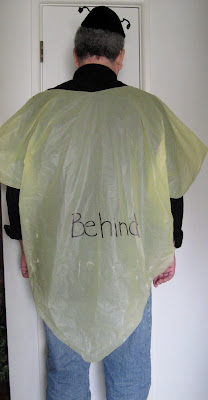 when he walked away!
Posted by Linda O'Connell at 5:43 PM

What a great sport your hubby is and cute too! sandie

So...did he ever discover his "behind"?

Hahahaha! Too funny, Linda! You DO have a way with words!

That is so cute!! Bet everyone was buzzing.

How clever you are to make hubby a cutie bee!

Oh Linda, that was a hoot. Your hubs is such a good guy. That was funny. Susan

He "would be" plagued by a wet rear end, if he had sat down in the same seat as I did last Tuesday evening.

His butt looks dry. Life is not fair...

Oh you all are cracking me up, but more than that you are making the Would Bee very happy with your comments. Thank you.

Your hubby's a good sport! That's a very clever idea, the 'would be'. I might steal it next year...if I can remember that long!

I Would Bee proud to wear that costume--that's awesome! Your hubby has a great sense of humor, which I'm sure made the whole thing even more fun.

Love it. You are terribly clever. And your hubby is one hell of a good sport ; )

That's so cute. What good fun it sounded like. Love the Would Be "Behind" costume! haha.

Too funny! I'm impressed that you got him to wear the antenna.

That is hilarious, you would bee quite creative.

You are blessed with a mate who is a wonderful sport. Sounds like you had great fun!