A tip of my hat to the leprechaun 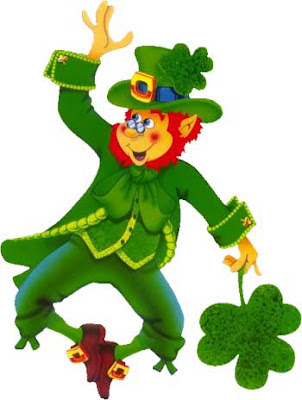 Happy St. Patrick's Day to all of you wearin' the green and tippin' your hat. That green beer will get you if you don't watch out.

Ashley, my first granddaughter, was in my class almost twenty years ago. The leprechaun leaves his little footprints every year and spills his (fake) gold, pennies and sparkly things all over the room. He even visits the bathroom. Oh my, he jumps on the toilet paper roll and the toilet seat. You should hear those kids squeal. EVERYone wants to tell me and take my hand so I can come see it. I tsk-tsk and say, "That naughty little leprechaun!"

We try to trap him, but you know those sly little guys. We've never caught one yet.
It is one of the most exciting, wild and memorable days.

Ashley was about seven years old, questioning the truth about Santa, the Easter bunny and tooth fairy. As I was driving, she expressed her doubts and asked about the leprechaun. I said, "Seriously, they are everywhere, but they don't want you to see them or catch them."

No sooner did I say that, a gust of wind lifted a large, bright irridescent green potato chip bag a few inches off the ground. It skittered in front of the car and dropped out of sight into a ditch.

The most verbose little girl in the world was speechless. When she caught her breath, she screeched, "I saw a leprechaun! I believe-I believe!"

I believe I laughed until tears rolled. That was divine providence, or an interference from leprechaun land. Ashley recently told me that she thought she had really seen a leprechaun scamper in front of the car and into the ditch that day.

St. Louis has two huge St. Patty's celebrations, one in an area called Dogtown, where the Hibernians celebrate with a parade and day-long partying. There is also a parade downtown.

Many years ago, I took my students on a field trip to the downtown area on March 18th. As the children got off the bus, there were some young, green-clad revelers sprawled at the curb still sippin' the suds.

"Teacher, is that a leprechaun?"

"Does he have an orange beard?"

I shook my head. What else could I do?

Do a little jig, and hurry over here for some great advice for writers. Jennifer Brown Banks has a guest, Noelle Sterne, whose advice is spot on.
Posted by Linda O'Connell at 7:24 PM
Labels: Jennifer brown Banks, leprechauns, Noelle Sterne

Oh Linda, you have had soooo many experiences with your little charges. Aren't children the absolute best? I love them so!
Thanks for sharing your St. Patty's Day recollections. Susan

What a wonderful story. I imagine if you continued it, telling about other "magic" your daughter encountered as she grew older, it would make a wonderful tale to submit.

Happy St Patricks Day to you, Linda. Begorrah!! Oh, how I love that little story about Ashley and the leprachaun!! Wonderful.

Linda,
I wanted to let you know you helped inspire this post:
http://charleneoldham.com/2012/03/17/if-eckhart-tolle-blogged/

That's a sweet story. Little kids hoping to see a leprechaun. Have you asked them what they would do if they caught one?

You wrote me last week and asked for my email - you needed to ask me something. Did you get it? I haven't heard from you. I am stopping by to say hello and wish you a happy St. Pat's day! sandie

Happy St. Pat's Day to you too! Thanks for the blog mention. :-)