Did he really read that aloud? 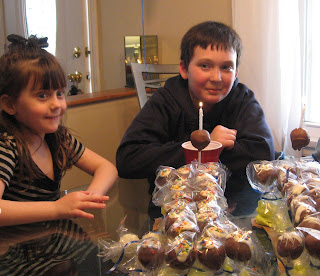 Happy eleventh birthday to grandson, Nicholas. Instead of a birthday cake, his Aunt Chris made him delicious chocolate cake pops in the shape of a number 11. Eleven years ago, I was coaching my daughter-in-law who was in labor. She hadn't eaten all day. Every time she rode out a contraction she'd wince and say,"Owwww! That hurts and I want a BIG MAC!" We still tease her about it. 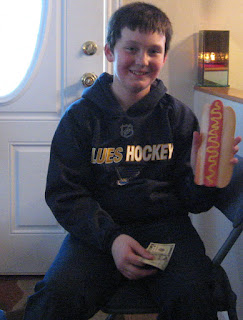 Nicholas is still a sweet and innocent little boy. I wish I could show you the group photo of the ten boys piled in the small living room, laughing themselves silly as Nick read his cards aloud. He started out reading the inspirational cards from grandparents. Then, he opened the cards from his buddies. He was as thrilled with the $ that fell out, as he was astonished at the verses. They were crass, crude and definitely purchased by the boys themselves, at least I would like to believe that. One had a cute dog on the front. "I left something inside for you..."
Nick's smiled disappeared when he saw the inside. "Dude, really. Poop?" We cracked up at his repsonse. Then he opened the next card; it was about passing gas. His facial expression was priceless. Then, the most inappropriate of all, the one he's holding. "Bet you never thought you'd get a paper weiner for your birthday." The rowdy boys rolled on the floor laughing. Nick half-snickered. And I had to laugh at his expression of disbelief.  I won't mention the jokes those boys made about eating the dessert. 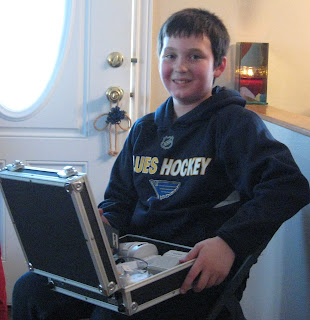 He received more $ than I have, Blues hockey tickets, Cardinal baseball tickets and this, his favorite gift, a ghost detecting kit. When he removed the first item, it started beeping. "Hey, does that mean we have ghosts in here?" I'm sure he will have many fun adventures with this. He's been on the lookout for Big Foot all year. 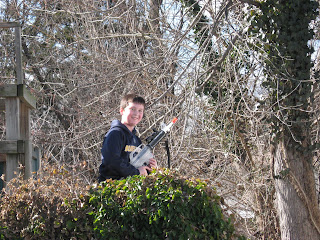 Nick's hiding in the bushes from his gun-toting buddies who were searching for him. Those overgrown, football-playing "little boys" ran and chased one another and giggled and wore themselves out playing army.
My thoughts on that gun-play took me back to the days when his dad ran the neighborhood playing army with his buddies. When I lectured him and took his guns away, he used a stick.
While I have always discouraged gun play, I realize, having raised Nick's daddy and also having taught preschoolers for almost four decades, and knowing that Nick has a tender heart like his dad...
sometimes it's best to allow boys to be boys.
My sad reality: within a year or two, these kids will think they are too big to 'play' and they will have lost all of their innocence. In seven short years, they will all be registering for the draft. Don't let me get weepy here. The kids are just growing up too fast.
At least I have Nicole, Nicholas's big-blue-eyed sister (pictured above) to make me smile. Please, no jokes about Nick and Nick :)

Okay, no Nick and Nick jokes, but I can't resist saying I'm glad your daughter-in-law got a Big Nick instead of her Big Mac. And oh, I hear you on that gun thing. My son was born making sticks into guns until I finally gave it up and let him own toy ones.

Isn't eleven wonderful. Even better than ten. Or perhaps it's the grandchild part.

Time flies past at what seems like warp speed. All the more reason to treasure every moment while we can.

Lovely photos of your grandson (and granddaughter ) there. What a lovely smile he has. Oh, don't tell me about them growing up. It's so sad, isn't it? My eldest granddaughter is 15 and is quite the young lady now. At least I still have Eli & Ruby, but even their time is going by far too quickly :( I want to hold them and keep them this age for ever!! :)

I know exactly what you mean, Linda. I took away Ian's guns, he used sticks. I took away the sticks. He used his fingers. Now he plays incredibly violent video games but is the gentlest, most compassionate man around...

I don't know if boys ever outgrow the need to conquer, burp, and emit gross sounds. Get a group of 35 years old together and it will look a lot like Nick's birthday party! Sounds like everyone had fun and that is the real deal!

Boys will indeed be boys. No getting around it. Sounds like he had a fun party. :)

Finally my boys are past the stage where the little one sports a red mark on his forehead from the big one lining him up to shoot darts and Nerfs at him. Without my consent.

I took away the giant Nerf blasters that my mom gave them, and kept them in my bedroom for two years. The Nerfs, not the boys. I'm pretty sure that would be frowned upon.

Awwwww, so glad Nick had a super duper birthday. I can tell his Grammie loves him to the moon and back! (And I mean the moon in the sky. hee hee) Susan

Grandsons are just the best. Your Nick and our Sam would get along swimmingly!If just for the "gas" jokes. LOL

Wow, what neat gifts! I never knew there was a ghost detecting kit. And, yes they grow up entirely too fast.