One day at a time

Emotions ran high here in St. Louis this past week due to flooding. The Meramec River, which is a few miles from our home topped levees after we received 11 inches of rain in a short period.
All major highways and many secondary roads were closed as sandbagging continued nonstop by workers and volunteers.


Imagine idling for hours as one east-west highway after another closed down. Talk about an island. People were actually trapped as flood water topped levees and overtook interstate highways south of St. Louis.
This was an historic flood, reaching 47 feet and causing massive damage and loss of life. My heart goes out to those affected. 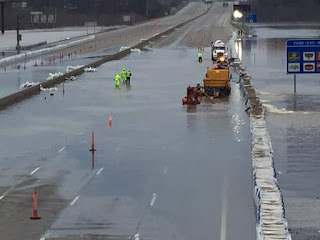 This is a photo of Interstate 55 shut down at Meramec Bottom Road as the river levels rose.


My son works at the utility company pictured below. He and the crew sandbagged and worked around the clock for days. They had a successful sand bag compound surrounding the plant when he left at 6:00 a.m. yesterday. I was on the phone with him, trying to keep him awake as he drove home. He received a call stating that the flood had overtaken the second of his company's sewage treatment facilities, and the workers had to run for high ground. All of the team's hard work was in vain. This is how it looked as the river overtook the plant and raw sewage spewed, making its way downstream.

We are being asked to conserve water, but not to boil it, yet. Oh what a mess. The river finally crested today. A massive cleanup effort will be underway as soon as the water recedes. 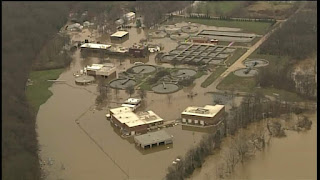 My friend's cabins, which have been in her family for years, suffered major damage. One is at ground level, but the other two are forty feet up on stilts. I can't imagine watching your summer homes go under water, and losing all the contents. One cabin down the road from her was swept completely away, and the news stations kept covering the horrific images of it and also cars, trucks, a loaded school bus, and semi tractor trailer trucks being carried off.

My granddaughter's office parking lot and the building's basement flooded. Unable to go to work.

What a way to start the new year. Life is unpredictable, like a flood. Sometimes we are flooded with wonderful surprises, and other times we feel doomed by the roiling waves and hard knocks.

One day at a time. That is all anyone can take. My heartfelt prayers are with all those affected.

Today he said, "Remember that tall woman on my old volley ball team?"

That last big flood, in 1993, put me out of work for six weeks. Which is not to say I didn't have to work. Our new unemployment office on South Broadway took a hit, and had to have drywall and carpet replaced. Which meant I had to go all the way to the Crestwood office. Two hours getting there, two hours home. Lots of traffic on the roads that were open. Plus we had to stay late because so many people were out of work due to the flood.

I hope everything get back to normal as quickly as possible. While it's tough to lose things that are not replaceable...they're just things. Not people.

Yes, the flooding is a super sad story...but your story on Bill was more than super funny! I laughed out loud! Thanks!

I hope the waters subside soon. Flooding is no laughing matter. We had flooding in our area, too, but not quite as bad as you all had it. Wishing you a happy new year.

Your wise analogy is so true. Life is indeed unpredictable. Prayer avails much. Glad you're okay. :-)

The flooding has been truly horrific. Hopefully we're back on the road to normal.

So sad to hear about all the flooding and the problems it has caused in your area. I hope things are starting to improve there by now.